In 1991, a relatively unknown band called Slint from Louisville, Kentucky, put out their second album… and almost immediately broke up. Few people heard “Spiderland” at the time, but those who did had their minds blown. It’s now considered an underground classic, directly influencing modern prog-rock groups like Mogwai, and when it was re-released by Touch-and-Go Records as a box set this week, Pitchfork rated it a perfect 10.

The “Spiderland” reissue includes a remastering of the album, fourteen previously-unreleased tracks, a book… and “Breadcrumb Trail,” a feature documentary by filmmaker Lance Bangs. He and drummer Britt Walford — one of the main creative forces behind the band — talk with Rico about the lingering allure of a singular record.

Rico Gagliano: Lance, let me start with you. As you say at the beginning of the movie, you’ve been making this film… basically for decades. For those who haven’t seen it, tell us what drew you to your subject.

Lance Bangs: I was in Athens, Georgia in the early 1990s. I was still a teenager. I was doing spoken word with a band there called Bliss, and we happened to go on tour, and we went to a really great all-ages club called Squash Pile. We walked in… and this really transfixing record, with this amazing atmosphere to it, was playing through the PA. And I was instantly curious about it, and wanted to know: what was this music, and where did it come from, and why did it sound so distinct?

It sounded like kind of short stories being spoken in a narrative form — but really interesting and cinematic — over really striking, and complicated, and interesting music. And I found out right away that the band had already broken up. And you know, I don’t think they had put their own names on the record. The band name doesn’t appear on the front of the record. It was this very cryptic object with a really remarkable photograph on the cover that drew your attention and gave you a sense of, you know, “Who are these four figures floating in a quarry, and what are they thinking?” 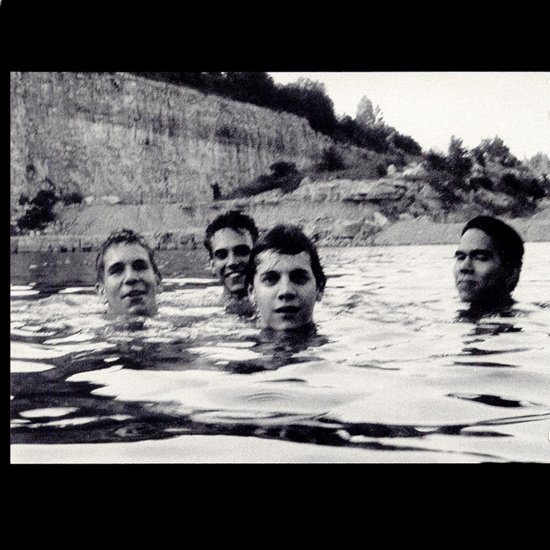 Rico Gagliano: It’s basically the four heads of the band members floating in a lake in a quarry, basically.

Lance Bangs: Yeah. And I was just instantly curious, and started driving up from Athens, Georgia towards Louisville, with kind of, you know, Super 8 movie cameras and video cameras, and documenting as much as I could find. Kind of chasing stories about these guys.

Rico Gagliano: So, basically you go into it knowing nothing about the band. There is no information on the album. What did you expect to find when you caught up with them? Were they going to, you know, tell you the secret of life?

Lance Bangs: I was hoping… you know, honestly, I was hoping to find out like, “Oh these two guys from Slint have a new band, and they’re going to play, and you can go see them at this house party.” Or, “These guys are in this studio, and if you want to go check out the sessions, feel free to go drop by.”

Instead, I was talking to younger people that were sort of influenced by them… who had all of these kind of Sasquatch-type stories about [Slint] that sounded like tall tales. Like that they had checked into hospitals during the recording, or they were in seclusion, or they were hiding out in a cabin in the woods trying to write new songs. All these things that kind of seemed larger than life… and yet maybe believable, based on how distinguished and interesting the music was.

Rico Gagliano: Well, let me ask you, Britt — why was there no information on the album? Were you being willfully oblique, or did you just not want people to bug you?

Britt Walford: We didn’t not want people to bug us… There was an aspect of… we didn’t really think, like, ‘marketing’ really made any sense to us.  But I think it was just aesthetic choices really.

Rico Gagliano: And it does, as Lance says, get across the kind of stark, cinematic quality of the music. Let’s actually hear some of it. Do you want to pick a song off the album? Which one do you think kind of represents the record to you?

Rico Gagliano: So, you started, as a teenager, in a punk band called Squirrel Bait. Slint’s music is in many ways the opposite. It’s very measured. It’s very precise. The songs are long. You play especially with dynamics, very soft to suddenly very loud. Do you recall a moment when you headed down the path towards that sound and kind of left punk behind?

Britt Walford: It seems like we liked a lot of different kind of stuff, but, you know, The Minutemen were maybe an influence.  And they were just one of a lot of unique bands that, like, opened your head to try new kinds of things.

Rico Gagliano: To do anything.

Rico Gagliano: You must hear this from a lot of people: “Spiderland” – I mean you heard it from Lance – it’s one of these albums that appears, and if you’re a certain kind of person, you feel like you’ve been waiting for that sound forever and have no idea where it came from. Does hearing that from people surprise you? How aware were you at the time that you were doing something totally different?

Britt Walford: Man, that does really surprise me. The album… it does sound like kind of weird to me know, you know.  I’ve heard it a few times over the years and just been like… “Wow. That’s weird.”

Rico Gagliano: In the movie, your parents are showing off the piles of mail that started coming in after that album came out. I’m sure you had people like Lance, you know, trying to track you down. Do you remember maybe a run-in with a fan that particularly stands out?

Britt Walford: All of the letters were really pretty surprising. They were from all different parts of the world, and a lot of them would be from, like, pretty young people, and that was really cool.

Rico Gagliano: Does one stand out?

Britt Walford: The PJ Harvey one was pretty cool.

Rico Gagliano: What? PJ Harvey, of course, one of the great female rockers of the ’90s.

Britt Walford: I mean she wrote because we had — on the back of the record — “Interested female vocalists write.”  And so she wrote.

Rico Gagliano: You could have maybe had PJ Harvey as your vocalist? There’re a lot of bands that would have gotten back together just to do that.

Rico Gagliano: Lance, let me actually close it out with you. I mean, you got to meet these guys and hang out with them for decades. What most surprised you about it?

Lance Bangs: That they were, you know, such fascinating, interesting guys to me.

The work that they did in other combinations and on their own over the years afterwards, there’s all kinds of great music to discover from the projects they did in subsequent years. And, yet, it always felt like they were making great work and not seeking attention in traditional ways. Not self-promoting. Not, you know, putting a sticker on something saying, “Former Members Of Slint.” Often working under fake names, or no names, or no information on even the subsequent releases.

It genuinely feels like those guys were not seeking approval, or, you know, regard from the outside world. It felt like they just loved the time that they spent with each other crafting and refining and writing these songs.  Regardless of whether anyone else was into it or not.