Ruth Reichl was food critic for The Los Angeles Times, then The New York Times, and then served for a decade as editor-in-chief of the respected, venerable food magazine Gourmet… until it folded in 2009. She has edited or contributed to eighteen volumes of food and wine writing, and that’s not counting the five bestselling books she authored herself.

Her newest, “Delicious!,” is her first work of fiction – though the plot doesn’t seem too far removed, at first, from her own life.

Rico Gagliano: This is the story of a young woman — her name is Billie.  She moves from California to New York City to take a job at a respected, venerable food magazine — it’s called “Delicious!” — which shortly thereafter suddenly folds. It sounds suspiciously like your experience at “Gourmet.” Why write about that experience in novel form rather than the memoirs you’re known for? 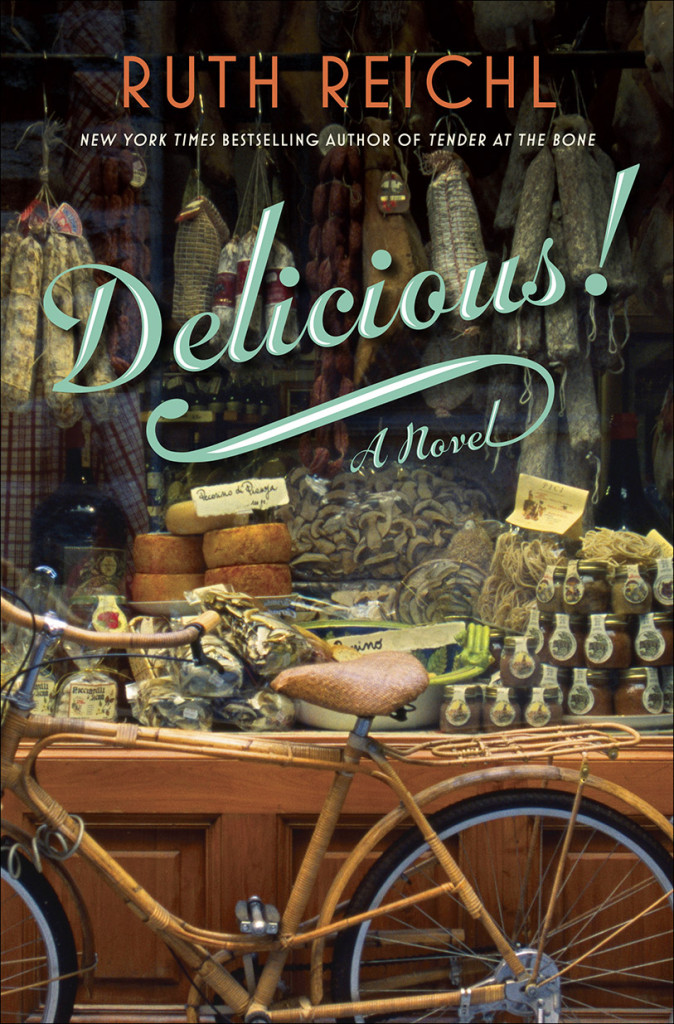 Ruth Reichl: I mean, I guess it sort of happened because I had this experience of — when the magazine was closing — the first thing I did was lock the library.  Because we had this amazing library at “Gourmet” that, you know, every great cookbook since ’41 came through there, and it had been beautifully curated, and I thought, “Someone will want this library.”

So I went over to a filing cabinet in the library, and opened it — I had never done that before — and there was every letter “Gourmet” had ever gotten. They weren’t fascinating letters — they were, you know, complaints about recipes — but I sort of had one of these epiphanies that you sometimes do as a writer: What if I had found a bunch of letters by a little girl, during World War II, to James Beard — who had in fact worked for the magazine at one point.

Rico Gagliano: Which is sort of the twist of the book, that Billie finds that cache of letters.

Ruth Reichl: Right. And I wanted her to be in this… I mean, food people are the most generous people I know. A really good food magazine is a warm, embracing place. And it was just a way of putting her in a very warm atmosphere.

Rico Gagliano: How much of that atmosphere is actually based on the real “Gourmet,” and how much of it is fantasy? The “Delicious!” magazine that you represent here, it’s the kind of place where an editorial assistant is not only not admonished for wandering for hours during her work day around Greenwich Village tasting food, she is encouraged to do so. Was that actually the case?

Ruth Reichl: Yes. Even when I was at The L.A. Times as the food editor, what I said to people was, “I don’t wanna see you sitting at your desk — get out!” I never had a sense that people do their best work sitting at their desks. I think they do their best work by going out and living and bringing stories back. That was how Gourmet ran.

Rico Gagliano: All right — so, basically, if one has a chance to have you as a boss, take it.

Ruth Reichl: Well, I’m not sure about that!

Rico Gagliano: The twist in the book, as you said, comes when Billie stumbles upon this batch of letters from World War II, and they’re letters from this young reader of the magazine to the great food writer James Beard. Beard lived well into the 1980s — why did you decide to have this correspondence date specifically back to the 1940s?

Ruth Reichl: Well, for a lot of reasons. I mean, one was that I had the great good fortune of finding, in a thrift store, a whole trove of documents from World War II, mostly from the Department of Agriculture. “How to grow a victory garden,” “How to cook with rations.” Food was considered one of the fronts of the war.

Rico Gagliano: Because it was in shorter supply, obviously.

Ruth Reichl: It was in shorter supply. I mean, the Crop Conservation Corps was really about people going out and picking fruits and vegetables on the farms, because the farmers were all at war. They knew that they had to feed the soldiers. People were saving their fat. And, I don’t think there’s been another time in the history of this country where we literally were eating at the same table.

Rico Gagliano: Going back to the letter-writing aspect of the book, these letters are being written to James Beard.  My understanding is you knew him?

Ruth Reichl: I can’t say I knew him well; I met him many times, yes.

Rico Gagliano: You obviously think of him as perhaps the ultimate pen-pal for a food-obsessed person. What made him so great?

Ruth Reichl: He… for one thing, he spans most of the 20th century. He was one of the few Americans of his time who really understood that American food could be great.  I mean, in a time when Americans were kind of ashamed of their cuisine.  He really understood that part of our strength was that we’re a nation of immigrants, and that we’ve absorbed all of these different foodways into our culture. I mean, in many ways, he is the father of modern American cuisine.

Rico Gagliano: What would you most like to talk to him about today, if you could correspond with him?

Ruth Reichl: Oh, I would just love to walk around with him and show him New York, today.

Ruth Reichl: Yeah. I mean, he would be, I think, so thrilled with where we are now with food. I never thought that I would see a time when food became part of popular culture, when people would think of eating, going to restaurants, as being as interesting as going to movies, going to theater. That it would become something educated people were really interested in.

Rico Gagliano: You were talking about the 1940s, this time when, as you say, Americans all ate from the same table — they all had to chip in to grow and cook food for everyone. Obviously, you are very proud of how far American culture has come, but in a way, do you want to go back to the ’40s? Maybe we’ve come too far in one direction and lost something?

Ruth Reichl: I think the thing that we have lost is… Eating has become a real class issue in America, and that’s shameful. Everybody has a right to eat well, and we should not be in a place where rich people can eat food that’s never been touched by pesticides, and poor people are left with stuff that’s cheaper than food. If I could dial it back, that’s what I would dial it back to.

Rico Gagliano: Do you have any idea of maybe a direction to go to make that happen?

Ruth Reichl: One of the ways is we start thinking about justice for food workers. The people who are being relegated to eating the stuff that’s cheaper than food, shamefully, are often the people who are picking and packing and serving the food.

Rico Gagliano: There’s a famous quote about music critics, which goes: “Writing about music is like dancing about architecture.”

Rico Gagliano: Of course, and a cynical person might say the same thing about a food critic, or someone who is writing a novel about food. Why do we need it?

Ruth Reichl: Well, let me answer that with one of the letters I got when I was at “The New York Times.” I got a letter from a man who said, “I wish you would write more often about steakhouses. I had a quadruple bypass and I’m no longer allowed to eat red meat, and the only time I ever get to taste it is when you write about it.”

Rico Gagliano: Wow. So, basically people are living vicariously through you, to an extent.

Ruth Reichl: As a restaurant critic, I mean, one of the things that I always thought was: Most of the people who read this review are never actually gonna go to these restaurants.  And one of my jobs is to put them in the seat across from me, and have them taste what I’m tasting. As a writer, it’s a wonderful challenge, trying to describe an intangible. I mean, that’s what all good writing does, really. You make people feel and taste and smell things.