Hi. My name is Thomas Pierce. I have a new book of short stories out, and I’m going to read from one of them now, called “Shirley Temple III.” It’s a story about a mother and a son, Mama and Tommy. Tommy is the host of a nature reality show called “Back From Extinction,” in which they actually bring back long-extinct animals from extinction. Mama is throwing a party when the story begins, a wedding party, and she’s waiting for her son to come home. He’s very, very late.

Mama stubs her menthol out on the steps and goes inside to stack the dirty dishes and glasses. Upstairs, she changes into her nightgown and takes her pill. She’s on the edge of sleep when she hears the truck in the driveway. Tommy is home.

She wants to sing. She wishes the party wasn’t over so everyone could see her son. When she greets him out front, he pulls her into a deep hug. She’s already forgiven him. Already forgotten how mad she was an hour ago. 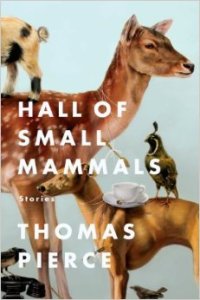 “Well, Ma, I’ve got a good reason for being late”, he says, and pats his truck, which has a “Back From Extinction” magnetic decal on its door. “Something I need to show you”, he says. “Pour us both a drink and meet me around back.”

She pours him some grapefruit juice in a tall Daffy Duck glass. Tommy comes into the house through the back door. He pulls a flask out of his pocket and tips it into Daffy Duck.

“Follow me,” he says, and leads her into the back yard, both of them swatting their way through a veil of mosquitoes and moths attacking the overhead flood light.

There, in the freshly mowed grass, Tommy has something hidden under a quilt. It’s moving.

“What I’m about to show you”, he says, “you can’t tell a soul about it. If you did, it would be major trouble. Trouble with a capital-T.”

He sips his drink and tugs the quilt away. Mama takes a step back. She’s looking at some kind of elephant. With hair.

“Don’t worry, she’s not dangerous”, Tommy says. “Bread Island Dwarf Mammoth. The last wild one lived about 10,000 years ago. They’re the smallest mammoths that ever existed. Cute, isn’t she?”

The mammoth is waist-high, with a pelt of dirty blonde fur that hangs in tangled draggles to the dirt. Its tusks, white and pristine, curve out and up. The trunk probes the ground for god knows what, and then curls back into itself like a jelly roll.

“What’s a gosh-durned Bread Island Dwarf whatever doing in my yard?” Mama asked.

“Listen,” Tommy says. “This is very special. Other than the folks at work, you’re the first modern human to ever lay eyes on such a creature. Her episode hasn’t even aired yet. Go on, you can touch her. She’s friendly. Her name’s Shirley Temple.”

She points to the dog pen, under which Shirley Temple the Great Dane is buried. The dog had tumors that couldn’t be removed.

“All right”, Tommy says. “I meant it to be honorific. Call this one Shirley Temple II, if you like. He puts his hands on the mammoth’s tusks. “Or, maybe we should call her Shirley Temple III, since technically, the first one was the “Good Ship Lollipop” Shirley Temple?”

He runs his hand along Shirley Temple III’s back. The mammoth looks up at him with dark, mysterious eyes. It doesn’t seem to know what to do in this new setting.

“That’s what they tell me. Isn’t she amazing?”

Mama nods, because the mammoth really is a scientific miracle. A true marvel. But, then again. It’s getting late. She’s been awake since 4 AM, and she’s already taken her pill.

The moonlight shines down on the three of them. They decide to keep Shirley Temple III in the dog pen for the night.