At a time when the American diet was mainly meat and potatoes, he advocated vegetarianism. Today, we’d laud him for that, but we might question some other moves he said would lead to excellent health. Like, standing inside an electrified metal cage. Or undergoing — sorry, there’s no nice way to put this — daily water and yogurt enemas.

At the Battle Creek Sanitarium in Michigan, John and his brother Will subjected willing clients to these and other unique health practices. And also put them on a diet of super bland foods. But one day, the brothers accidentally cooked up something kinda tasty.

Apparently Will boiled some plain ol’ wheat, set it aside and then ran off to attend to patients. When he got back, the wheat had gone stale. Will and John tried to roll the gunk into sheets, but instead, it broke apart into flakes. The brothers toasted these and voilà: breakfast cereal. Or as they called it, “Granos.”

Eventually, the brothers hit upon a granose recipe using corn, and came up with a way better-sounding name for it: “Corn Flakes.” Patients loved it! And soon, Will set up a company to sell the stuff. Alas, John didn’t share in the profits. He refused to join the company — when his brother insisted on adding sugar to the recipe.

Today, of course, Kellogg’s Corn Flakes show up on breakfast tables worldwide. Along with the familiar orange rooster logo on the box that’s there, by the way, because of the Welsh word for “rooster” — ceiliog (pronounced KAIL-yog).

Mixed up by Pamela Vaughn, bartender at Clara’s on the River in Battle Creek, Michigan. 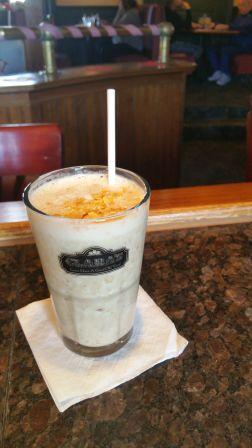 Instructions:
Blend in a bottom blender until smooth and a medium thickness. Add more ice if needed. Pour into a large glass. Garnish with crushed corn flakes.