Author Sam Harris holds degrees in both philosophy and neuroscience, and he puts them to use penning bestselling books and articles about the intersection of brain science with human culture and interaction.

In his newest, “Lying,” he explores a life lived without the casual “white lies” most people tell every day, and the sometimes unexpected outcomes of radical honesty.

Rico Gagliano: How did the concept of lying become so important to you?

Sam Harris: My interest in this actually precedes my interest in science. I was a freshman at Stanford, and just happened to find my way into a class on ethics, and the single question that organized this course was, “Is it over okay to lie?”

Everyone comes into this conversation more or less convinced that there’s some subset of lies that are necessary and even noble. These are generally called “white lies.” And what we found in this course is that it’s immensely difficult to find white lies which survive scrutiny.  So basically this course was a machine for convincing people that something approaching truly radical honesty was the way you wanted to live.

That happened to my brain when I was 18, and it’s only now that I’m writing about it.

Rico Gagliano: Alright, well I want to talk mainly about this “radical truth” you just mentioned. You have many examples of situations where people tend to think that it’s okay to tell a white lie. How about I run a couple of them by you and you tell me the arguments for telling the truth?

Rico Gagliano: Alright, number one: a friend asks you to dinner, and you say you’re too busy to go, even though you’re really not. What’s the harm there?

Sam Harris: That kind of communication allows us to never confront the fact that we have these people in our life who want something from us that we don’t want to give, per se.  And we’re maintaining relationships that we actually don’t want.  Or we don’t want them at the level that they’re demanding our time.

Rico Gagliano: But on the other hand you don’t hate that person. You don’t want to turn them off. You never know when that person might be important in your life.

Sam Harris: Right, but if you were forced to be honest in those situations, you would discover that you are a sort of ulterior person. This person that is kind of keeping people around, in the odd chance that they might be useful to you at some point. It’s an interesting thing to discover about yourself.

Better, then, just realizing that this is a person who you want to see once a year as opposed to once a month or once a week.

Rico Gagliano: Alright, well here’s kind of the mother of all white lies, which you bring up in the book: Saying “no,” no matter what, when asked, “Do I look fat in this dress?”

Sam Harris: Right. So, many people view that question as really not a question. What is really being asked is, “Tell me that you love me” or “Tell me that you think I’m beautiful.” If you believe you’re actually in that situation where there’s a subtext that you’re supposed to respond to, well, it’s not a lie to do that.

But in many situations there is a question being asked here, and information is useful.  It could be that one dress looks much better than the other. What is more flattering to her? It could be that your wife wants to lose weight. You want her to lose weight. You think she would be happier if she lost weight. There’s a conversation about weight that, if you’re always eliding this inconvenient fact, no one is ever forced to realize that both of you are noticing something that actually can be changed.

Rico Gagliano: That’s true, but are you married by the way? Do you mind if I ask?

Sam Harris: Yes. And obviously, my wife now knows not to ask me if she doesn’t want my actual opinion of something. But the converse of that is, when I give her my favorable opinion, she knows I’m telling the truth.  People don’t realize how they devalue their opinions when they lie just to be pleasant to people.

Rico Gagliano: Here’s the most jaw-dropping personal example you give in the book: On your way back from a journey to Nepal, a customs officer — I guess in the airport — asked if you had done any drugs on your trip.  And you said…

Rico Gagliano: So are you nuts? That is crazy.

Sam Harris: No, it would have been crazy if I had been carrying drugs back to the States. Then obviously I would’ve been forced, in a defensive way, to lie.

Rico Gagliano: Well, but that’s a good point: So you would have been forced to lie there. So there are occasions where you probably should lie to, say, for self preservation purposes? 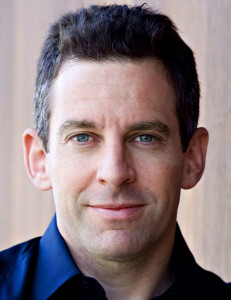 But in this case of going through customs, I was happy to explore the consequences of just honestly talking to a customs official about drug use. This happened over 20 years ago, and it’s one of the more memorable conversations I’ve ever had —

Sam Harris: — Because we talked for 15 minutes about all the drugs I had done. And he was genuinely interested; he hadn’t done many drugs —

Sam Harris: — And he’s searching my bag, as you might imagine, with exquisite fastidiousness, because he still has to play the game of customs officer.

But the net result was we both had fun in this conversation.  What you find in many cases is a willingness to be honest produces very novel and life-affirming connections in situations where you don’t have to be paranoid that the truth is gonna harm you.

Rico Gagliano: Alright. Sam Harris, clearly the most honest man in America, thank you very much.

Sam Harris: It’s been a pleasure.