It’s not something we think about everyday: where does our salt come from? When Sarah Sproule realized that much of New York City’s sea salt was shipped in from hundreds of miles away, she decided to make her own – locally – on the roof of a building in Midtown Manhattan. Brendan joined her at her Urban Sproule project, and got a taste of skyscraper-to-table sea salt.

Brendan Francis Newnam: If you make salt for a living, does that mean you’re always thirsty?

Sarah Sproule: I am thirsty all the time. I’ve done many salt tastings where at the end of it I’m about to collapse, but I don’t make a habit of it.

Brendan Francis Newnam: Alright, let’s tell everyone where we are. I am staring at the top of Madison Square Garden and the Empire State Building. This isn’t your traditional salt farm.

Sarah Sproule: No, it’s not. It’s actually the first ever rooftop salt farm in the world as far as I know.

Brendan Francis Newnam: So, what gave you the idea to create it here, and what made this space the right space?

Sarah Sproule: Well, back in January I was doing cooking demos for the Union Square green market, and I was so proud of every ingredient in the dishes that I would cook because I knew everyone involved in each ingredient, and then I would finish the dish with salt from any store on the corner. And I just thought that there should be more thought put into it. So, it started as a hobby and snowballed into a salt house, which is an 8 by 12 house with evaporation trays and-

Brendan Francis Newnam: But how did you end up on a roof in Midtown? It doesn’t feel very farmy up here.

Sarah Sproule: It doesn’t, but there’s a lot of rooftop farm culture in Brooklyn, and I just thought that the city was kind of behind the times, so I decided to kind of find people that I knew with rooftop space.

Brendan Francis Newnam: And you need to be outside because the sun is the key ingredient, right? So tell us how is salt made?

Sarah Sproule: So the one and only ingredient in our salt is Atlantic Ocean water. We have local fisherman that go 30 miles off the coast of Montauk to fish, and while they’re fishing they gather the water, which we bring out to the rooftop, filter and evaporate in our salt house. 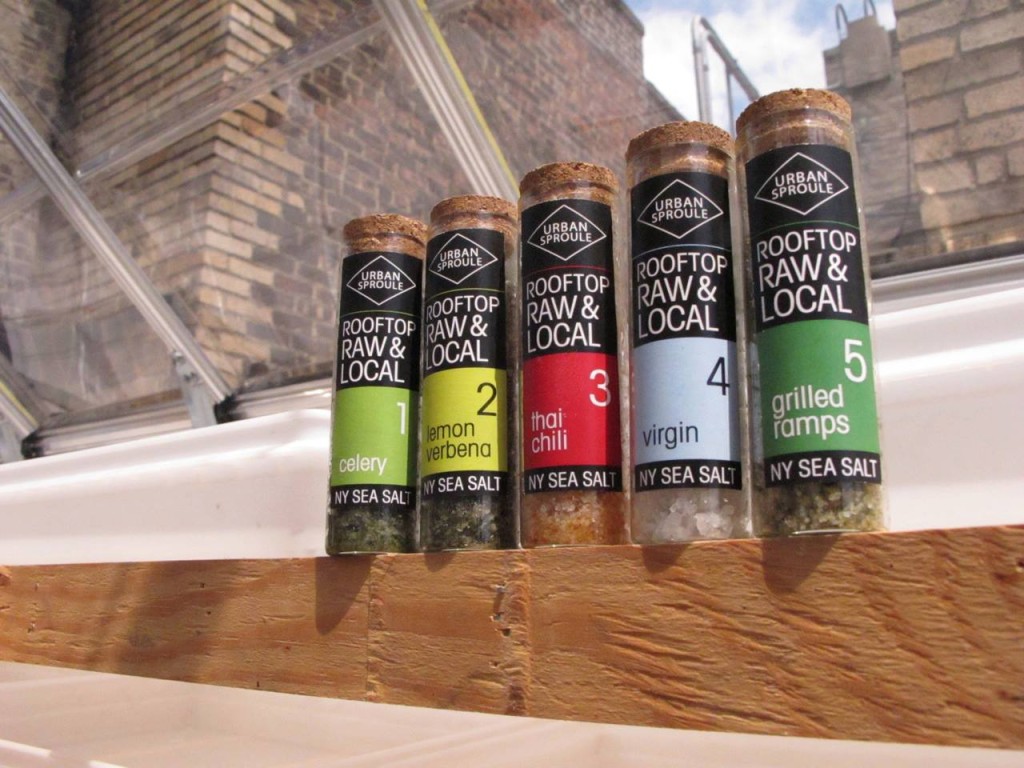 Brendan Francis Newnam: Is 30 miles enough? I mean it seems kind of scary to drink water from the Atlantic Ocean right outside New York.

Sarah Sproule: Right, there’s actually zoning of where you can fish shellfish and let’s say cod or tuna, and we only gather waters from those areas.

Brendan Francis Newnam: So what makes a salt distinct from another salt? I mean, I’ve seen bigger crystals, smaller crystals, some taste saltier than others. But there is there a larger spectrum of flavors that I’m not thinking about?

Sarah Sproule: There is, and it actually is all about terroir in wines, and I think it goes the same with salt.

It’s definitely about the mineral deposits in the sand, what fish grown in that habitat. We would get grey salt from up north, and then we get a more pure, larger crystal salt from the Atlantic.

It also depends on the weather, if it’s rained or not, and also the season that we evaporate in. In winter, the evaporation goes quicker because the humidity is lower. So, the crystals are smaller.

Brendan Francis Newnam: So show me around the salt house, please.

Sarah Sproule: We have four holding tanks that are 55 gallons each. We filter the water into these tanks, and let them settle for about 3-4 days.

Brendan Francis Newnam: And what do you filter the water with?

Sarah Sproule: With a micron bag, so it’s an all-natural bag that we pull the water through. It just takes out any debris, which is not anything really at all.

Brendan Francis Newnam: Did you ever find a finger or anything like that?

Sarah Sproule: Never found a finger, but I’m sure we would if we made like Hudson River salt or something.

Brendan Francis Newnam: Alright, so you filter out the kind of debris, and then?

Sarah Sproule: I let it settle for about 3-4 days. We empty the water we, we filter it again into buckets and then bring it into the salt house.

Brendan Francis Newnam: So this looks like a mini greenhouse.

Sarah Sproule: With the wrap-around porch.

Brendan Francis Newnam: Yes, with the wrap-around porch that we’re walking on. Alright, wow. And then in here-

Sarah Sproule: So, there’s a lot of humidity going on, which is why we kept the roof vents open, but these are 500 bins with water in each other them.

Brendan Francis Newnam: We’re looking at two, there’s two rows of shelves, and there’s lots and lots of these plastic trays with about, how much water is in here when you fill them up?

Sarah Sproule: About 64 ounces of water. This has evaporated a lot. I loaded them about three weeks ago, so there’s about 250 gallons of water evaporating here.

Brendan Francis Newnam: And so then you have a little table here on the end, and I guess this is where you do the salt sorting. What’s the next step? Let’ say one of these trays was filled with salt.

Brendan Francis Newnam: Can I taste some of it?

Brendan Francis Newnam: What is the profile of your salt flavor versus something, cause I know they make salt on the Oregon coast and in parts of California.

Sarah Sproule: So, the Atlantic Ocean is one of the saltiest oceans in the world, which works to my advantage, because I get more out of a gallon than other people do, which is awesome.

Brendan Francis Newnam: Okay, and so the flavor profile is?

Sarah Sproule: It’s a saltier salt than you’d get from the Pacific Ocean. I think it’s really clean. Here, you can dot your hand. You can see the natural crystal structure.

Sarah Sproule: So it’s a bigger crystal structure definitely. It’s got a nice crunch, and then at the end it’s just like a nice buttery clean finish.

Brendan Francis Newnam: So we’re up here, and it’s just really cool, but do you ever fear that, I mean you’re surrounded by trays of crystal, you’re in a little building on the roof, that ATF is gonna come in here and kick the doors down?

Sarah Sproule: I have a story for you. The other night there was a fire, I think in the basement, and they had to check everything, so the fire department and police come up here and ask what is all this stuff in this greenhouse up here?

And actually, there’s a gentleman that lives like one floor down, and he says it’s sea salt. And the guy’s like, it’s not sea salt. So they eventually make the policeman taste it, and nothing happened. I mean he said it was fine, so…