Hi, I’m Rebecca Mead and I’m the author of “My Life in Middlemarch.”  My book combines biography of George Elliot, the Victorian novelist, criticism of her greatest work “Middlemarch,” and memoir of my life reading that book, which I first read when I was 17 years old, and have read many times since.

I identified very strongly with the heroine, Dorothea Brooke, a young women in a provincial town yearning for a more significant life, as was I. And as I grew older, I read it about every five years.  And every time I went back to it, my emotional response changed.

I’m going to read a passage from the beginning of the book, which describes a visit I made to the New York Public Library to look at a notebook that had belonged to George Elliot. I had a surprisingly intimate encounter with George Elliot and her world, and they way it connected with my world:

I opened to the first page. And as I did so, I became vaguely aware of a slight scent in 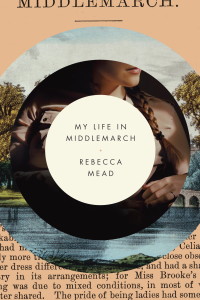 the air that was at once out of place and oddly familiar. The smell of a spent hearth. For a moment, I wondered if their could be a fireplace in the adjoining room.  But then it dawned on me that the smell was coming from the notebook itself. Perhaps, I quickly said to myself, one of the notebook’s previous owners had shelved it near a fireplace. Perhaps it was just the aging pages decaying. Still, there the smell was. And maybe, the book inscribed by George Elliot’s hand, and containing a record of her thought and mind, had also been imbued with a trace of her material world. And could lead me back there.

I closed the notebook and took one more look around the reading room. In a corner stood a small desk that had once belonged to Charles Dickens, an early admirer of the mysterious new author who went by the pseudonym of George Elliot. After the publication of her first novel, “Adam Bede,” Dickens wrote to her in person. He said, “Adam Bede has taken it’s place among the actual experiences and endurances of my life.”

I thought about his widely popular American tours, excursions into celebrity that were the sort of thing that Elliot avoided completely. Though in 1872, an acquaintance from England urged her to visit. She declined writing, “Boston – I always imagined it a delightful place to go straight to and come straight back from. But the Atlantic is too wide for that. I’ve crossed the wide Atlantic many times and it never gets any easier.”

In my early 20s, I went home to visit my parents once a year or so and they would come to see me. In my 30s, I would stop off for a day or two in England, on route to or from an assignment somewhere more extraordinary. Paris, Mumbai, Tokyo, feeling jetlagged and glamorous. As my parents became elderly, I went back more often. For walks with my mother that would be filled with accounts of doctors visits. And dinners in which my father would pour Rioja with an increasingly shaky hand.

When I first left England as a young woman, I didn’t consider that there would be a finite, knowable number of times I would return. Eventually though, each goodbye came to be freighted with the possibility that it might be the last.

I left Dickens’ desk, walked through the library’s marble corridors, and emerged on 42nd Street. I turned into Bryant Park and claimed a chair on gravel path under one of the towering London Plane Trees. A species named for the city of my birth, growing in the city I had chosen.

I thought about Elliot’s notebook and of what Dickens had identified, the strange poignancy of a great book. The way a book can insert itself into a reader’s own history until it’s hard to know what one will be without it. It might lead us to the library in mid-life, looking for something that eluded us before.