Thousands of scientists from around the world have dedicated decades of their lives to a single project: building a machine that may be able to recreate the conditions of the moments following the Big Bang. The Large Hadron Collider is the single biggest, most expensive science experiment conducted, focusing on something very, very small – The Higgs-Boson Particle – and something as big as human understanding.

“Particle Fever” is the acclaimed new documentary from Mark Levinson, a physics PhD himself, who left the science world to become a filmmaker. His dual background makes him well-suited to tell the dramatic stories that personalize what the scientists are doing at the Collider and explaining what it means for all of us.

Brendan Francis Newnam: It’s time for chattering class. This is the part of the show where we get schooled in a dinner party worthy topic. Today our subject is merely the origins of life itself and our expert is physicist turned director Mark Levinson.
His new documentary is called “Particle Fever” and it’s about the search for sub-atomic matter, specifically the Higgs-Boson aka the “God Particle.” This little clue to the origins of the universe was first theorized by Peter Higgs back in 1965, and it lead to the creation of the Large Hadron Collider in Geneva, Switzerland.

You know what Mark, you do such a good job of clarifying complex topics in this documentary. Maybe you can explain what the Collider is and how it works?

Mark Levinson: Okay. So the Large Hadron Collider basically collides particles. It’s a 17 mile underground ring. It’s underneath Switzerland and France. It’s about 300 feet below the surface. In this tunnel, basically they are circulating beams of protons in opposite directions. So you accelerate these beams of proton in opposite directions at the speed of light and then you crash them together at four points. And at those four points are the experiments, the detectors, which is what we call the experiments. That’s where you’re looking at what comes out of these collisions.

Brendan Francis Newnam: And tell me more about the Higgs-Boson and why it’s so important.

Mark Levinson: We understand, at this point, that the universe is basically made up of particles and they have certain interactions. But at the beginning of the universe, the theory is that they didn’t have mass. They would have just been like light. There was no atom, nothing formed, because everything was just flying all over.

What the Higgs Mechanism does is explains how just a fraction of a milli-milli-milli-second after the Big Bang this so-called Higgs Field turned on. And it allowed electrons and certain other things to get mass. And once they had mass then they could be trapped into atoms, and so you could start to get structure. You could get atoms and then of course molecules and then eventually galaxies and everything else.

That theory essentially explains everything we see on earth. But we were missing this one central part of that theory.

Brendan Francis Newnam: And so they built the Large Hadron Collider to figure that out. It took decades to build, involved thousands of scientists from all over the world.

Mark Levinson: I was always looking for “How this is gonna be a dramatic story?” As it turns out, I just barely got it organized to get over in time for the first test, the first beam test, the first big milestone in 2008. We didn’t know if it would start up. Luckily it did.

But then as it turns out, there was a huge explosion and there was a big accident just ten days after I started shooting. Of course I had to hang my head with the physicist because it was very depressing for them. But as a filmmaker I was thinking, “Yes!” But then, again, in classic screenwriting fashion, there ended up being other things that happened. False leads, and this and that.

It became more complex. But if I actually scripted what happened, people would have thought I was just really including all sorts of artifice.

Brendan Francis Newnam: So the trials and tribulations of the Hadron Collider are one source of tension in the movie. Another one is meeting these physicists who have spent their whole careers crafting theories which can be proven or disproven by one spin on this Collider. And it’s fascinating to think that one set of data could alter their entire careers. 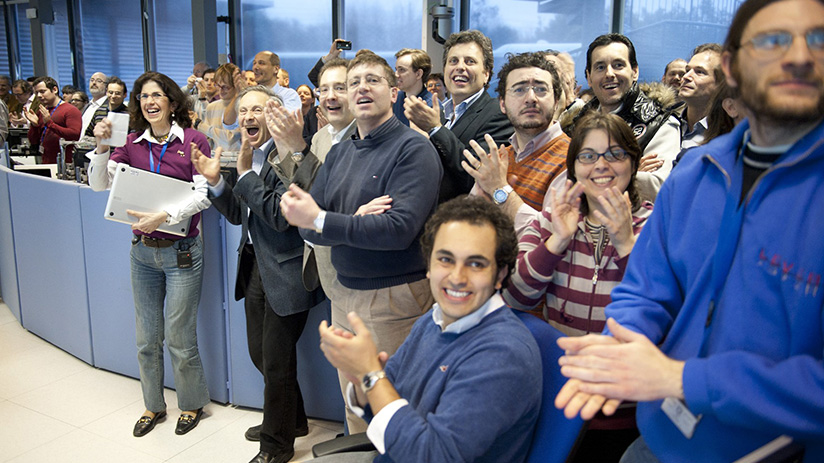 Mark Levinson: They have been working on this but they’ve been very actively building the machine for 20 years or something like that. But the stakes are also tremendous because if you, for instance, you look at a young woman, she was a post-doc at the beginning of this film, Monica Dunford. She spends all of her life building a machine that doesn’t find anything. That’s pretty frustrating.

Brendan Francis Newnam: So you ended the movie with the Stanford physicist Savas Dimopoulos saying, “Why do humans do science? Why do they do art? The things that are least important for survival are the very things that make us human.” Why did you end on that note?

Mark Levinson: For me, I had make the transition myself from physics to art in a certain sense. And people always ask me, “How did you do that? It seems like this completely continuous thing.” But I actually saw similarities in the process. We are all trying to make sense of the world around us. We represent it in some sense and we try to interpret it and, by representing it, try to understand how it works and our place in it.