Lumps of dough fried in oil might seem humble – but oliebollen have a long and storied place in Dutch culture. As Rico learned from Chef Eric Meursing at  De Culinaire Werkplaats in Amsterdam, they’ve been depicted in fine art going back centuries – and in Holland, it’s just not New Years Eve without an oil ball.

Rico Gagliano: How did oliebollen come to be in the Netherlands?

Eric Meursing: Well what I read is that there are three different stories. It’s also very German they believe, or Portuguese. People just brought it here and we changed it a little, and [at first] they were called oliekoek instead of oliebol.

Eric Meursing: Oil cookies. They had been also shaped like a little ball, but I think we made a bigger ball out of them.

Rico Gagliano: That was the Dutch tweak on the German cookie, was just to make it large?

Eric Meursing: Yeah, make it large, and put currants in it. Raisins and currants.

It looks airy, but it’s very heavy. I mean, you can never eat five oliebollen. It’s not good for your stomach.

Rico Gagliano: They’re like the size of a baseball, kind of.

Eric Meursing: You have them as big as a fist sometimes.  And when they’re ready you sprinkle them with powdered sugar.

Rico Gagliano: I’d describe them as the Dutch take on a donut, but without a hole.

Eric Meursing: Yeah it’s something like donuts, but I think it’s more heavy than a donut.

Rico Gagliano: If you can believe that!

Eric Meursing: Yeah, I think so.

Rico Gagliano: So when did they come to the Netherlands, the oliebollen?

Eric Meursing: Well the first oliebol appeared on a painting.  It was in 1652. It was a painting by Aelbert Cuyp, and he painted a woman with a basket full of oliebollen.

Rico Gagliano: A basket full of them.  So she’s a very large woman.

Eric Meursing: I don’t know. If she ate them all she would be very much larger than on the painting!

Rico Gagliano: So we know from this painting that they existed in like, the 17th century.

Rico Gagliano: The typical filling is currants and raisins. I know you can get them with other things, but the standard is raisins. Why is that?

Rico Gagliano: I see, so because it’s kind of holiday time, that’s a time to celebrate?

Rico Gagliano: But your take on an oliebol is different. Tell me how you prepare it.

Eric Meursing: We make them smaller, there are no currants in them, and they are savorish.

Eric Meursing: Yep, with all kinds of spices in them, and we eat it with a little bit of pesto, a walnut spinach pesto.  It is of course a kind of bread, oliebol, and you can eat bread sweetish but also savorish.

So let’s start making the oliebol for you.

[Rico and Eric move to the stove]

So there’s the dough going into the frying oil. It is very deep, in a wok/saucepan.

Eric Meursing: You see it rising, eh? It gets bigger and bigger.

Rico Gagliano: That’s delicious looking. I could just eat that, pretty much.  And in this batter, what spices are you using?

Eric Meursing: Yeah, you could say that! That’s an original way of looking at it: a naan doughnut.

Rico Gagliano: There you go; I’m doing all of your PR for you.

Rico Gagliano: You can market that, and I’ll take 10%.

Eric Meursing: You see, [this one] is going to look like a little animal, because I didn’t make a ball. Maybe it’s about the taste.

Rico Gagliano: It didn’t quite come out ball-shaped, you’re right! It does look kind of… I don’t know what that looks like.

All right, so now the sadly misshapen oliebol has now come out of the oil….

Eric Meursing: It’s ready, and this will be served tonight. It’s [served in] a cocktail glass.  And we use a cocktail glass because it’s almost like New Year’s Eve, and underneath we have a little bit of apple foam.

Rico Gagliano: So that’s an apple foam at the bottom [of the glass]?

Rico Gagliano: …In a kind of martini-glass looking thing. And now, so on top of the apple foam is a little —

Eric Meursing: Baby spinach. And here is a little bit of the pesto.

Rico Gagliano: All right, and now the twisted kind of golf-ball-sized oliebollen goes on top. So it’s like a spinach pesto salad with an oliebol on top, in a martini glass.

Eric Meursing: But you should imagine three balls like this.

Rico Gagliano: Oh I see, so normally there would be three oliebollen on top of —

Rico Gagliano: Each about, say, an inch wide normally. Oh sorry, we’re in the Netherlands — about four or five centimeters wide.

Eric Meursing: You have to dig deep and get all the different layers on your fork or spoon.

Rico Gagliano: That is delicious.

Rico Gagliano: Yeah, and by the way this is served… along with this there’s a kind of spritzer bottle, like a thin tube with a little aerosol sprayer on the top of it. What is this?

Eric Meursing: Champagne, which goes with New Year’s Eve of course, and [with] the oliebollen. But it’s better to spray it on your tongue. I mean, it’s a different sensation.

Rico Gagliano: So this is a spray bottle full of champagne?

Rico Gagliano: I’m gonna spray a little bit of this on my tongue and see how it goes.

I think I also got it all over my cheek!  So now I’m going to wander home and smell like a drunk on New Year’s, even though I had no alcohol at all.

Intrigued by the strawberry paper flower in the photo above or the rhubarb paper dress you heard Rico mention on the show? Take a look at Chef Meursing’s stunning conceptual creations. 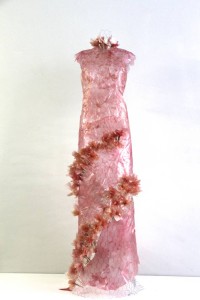