Brendan Francis Newnam: Each week you send in your questions about how to behave, and here to answer them this week, is Mr. Norman Lear.

He created and produced many of the sitcoms that shaped sitcom history, including “All in the Family,” “Maude,” “Good Times,” and “The Jeffersons” — one of my favorites. At their peak, his programs were viewed by 120 million people a week. That is 240 million eyeballs, give or take an eyeball.

But TV is just a part of the story. He’s also been a World War II serviceman, a joke writer, and an activist, among other things. He writes about all of it in his memoir, “Even This I Get to Experience.” It just came out in paperback, and Norman, welcome.

Norman Lear: Even this! Look at this, talking to you guys, here I am.

Rico Gagliano: It doesn’t get any better.

Rico Gagliano: There’s obviously far too much here to fit into one interview, so we’re just going to dive straight into your TV work, if you don’t mind. First of all, tell us about your first encounter with television. As you write in the prologue of the book, you were alive at the birth of TV, more or less.

Norman Lear: Yes, my wife, with our child, and I drove out to California. I was going to look for work as a publicist, and the only person we knew who had a television set was an uncle who was living here [in California]. We used to go over to Uncle Al’s to watch Milton Berle. 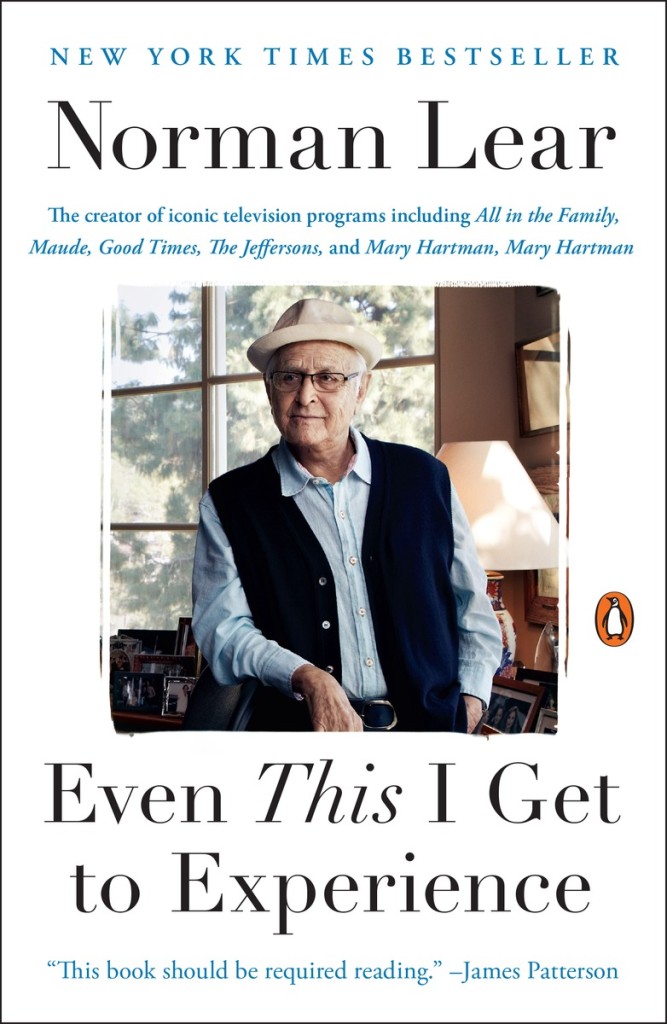 Rico Gagliano: Did it have much of an impact on you? Do you remember being…

Norman Lear: Well, no less or no more enthralled than I am today in this golden age of television. Unfortunately, like everything else in America, we deal with an excess — so there’s just too much content, but great.

Rico Gagliano: But back then, all you had was Milton Berle. It was much simpler then, I guess.

Norman Lear: It was a lot… well, life generally was simpler then.

Brendan Francis Newnam: You ended up making shows like “All in the Family” that were some of the first sitcoms to directly take on charged political and social issues. What led to that?

Norman Lear: Well, it was part of an expression of love of America.  You know, I think often that when I was a kid, we were in love with America. And I think because, in grade school, we had civics classes. I was taught, as an eight or nine-year-old, what my Constitution and Bill of Rights and so forth meant to me, what made America what it was.  “In love with America” is to understand those promises and guarantees.

My dad went to prison when I was nine years old. I was scared to death. I was Jewish. There was a Father Coughlin on radio who was a vicious anti-Semite, but I knew my First Amendment and my Bill of Rights. I know that that was part of what sustained me.

Rico Gagliano: So it was always important for you to speak out politically. Although, you started out… your career kind of began writing jokes for comedians that people wouldn’t consider politically edgy: Danny Thomas and Jerry Lewis. Do you remember a point where you made that shift?

Norman Lear: I didn’t know there was a shift.

The very first Dean Martin and Jerry Lewis “Colgate Comedy Hour,” the very first sketch, in the first show that we wrote, had to do with a campaign that the motion picture studios were running because they were afraid of television. Every motion picture theater had a sign that said, “Movies are better than ever!” Our first sketch was a satirical look at that.

And that first sketch caused so much of a furor that the studios insisted — and they did it — that Dean and Jerry took out an ad, apologizing.

Rico Gagliano: So, you started your career pretty much throwing some bombs!

Norman Lear: Pretty much the way it went!

Rico Gagliano: Let’s talk about “All in the Family,” which was arguably the most historically important show you made.  And it’s — for those who don’t know — about Archie Bunker, this cantankerous, racist, middle-class guy and his relationship with his family. From page one of your book, you make it clear that Archie was based on your own dad.

Norman Lear: My dad used to call me the laziest white kid he ever met.

Norman Lear: And I would yell at him that, you know, he didn’t have to put down a whole race of people just to call me lazy. So, I lived with that, so of course that was part of Archie.

Rico Gagliano: Do you have, maybe, an example of an episode or a situation from the show that you pulled straight out of your own life?

Norman Lear: Straight out of my own life? Archie and Mike, the son-in-law… were locked in a cellar.  And there was wine down there.  And they drank.  And the way they fought, and through the argument passed love for one another, speaks very much to my relationship with my dad.

My Dad… it’s difficult for me to say: He didn’t tell the truth. He cheated. He stole. But I never stopped loving him.

Rico Gagliano: Well Norman, you’ve lived quite a life, and it’s all led you to this crowning moment.

Rico Gagliano: Yeah, you get to answer our listeners’ etiquette questions. Are you ready for this?

Tip-toeing around your dinner party problem

Brendan Francis Newnam: All right. So, this first question comes from Andrew in the United Kingdom. Andrew writes: “I’ve committed to hosting a party, but I’ve also just developed an ingrown toenail. How can I adequately host a party and simultaneously soak my toe in hot water?”

Norman Lear: I don’t think he should soak his toe. He should remove it. Have the toe removed.

Rico Gagliano: Before the party.

Norman Lear: Before the — oh, yes! Do it before the party.

Brendan Francis Newnam: The party comes before the toe. You don’t even really need toes. My sister’s a foot doctor. She would kill me, but I mean, do we really need all our toes?

Rico Gagliano: That’s how you got your first show, isn’t it? You sold a few toes.

Brendan Francis Newnam: I was going to say, Norman, you’re 93! Have you used all of your toes in your life? No! You probably haven’t even used half of them.

Norman Lear: You know, it’s interesting to be talking about toes, because I stubbed one in the night about four nights ago and I… you can’t do anything for a broken toe, as your sister knows.

Norman Lear: So, in the course of this conversation, I’ve been suffering a little with a hurt toe.

Brendan Francis Newnam: I’m sorry. That could be gout, though. It could be the good life you’re leading.

Norman Lear: No, too young for gout.

Rico Gagliano: Well, Andrew, Norman feels your pain but, alas, you’ve got to lose the toe. So, there’s your advice.

Rico Gagliano: Here’s something from Kelly in Minneapolis. And Kelly writes: “I live in an old apartment building with very thin walls and, apparently, very thin floors. I can hear the guy below me snoring every night. How do I tell him his snoring is keeping other tenants awake? I should mention he is socially awkward. He never leaves his apartments, and sometimes, I think he’ll just snap and kill everyone in the building.”

Norman Lear: And the question?

Brendan Francis Newnam: “How do I tell him he’s keeping other tenants awake?” she asks.

Rico Gagliano: But he’s socially awkward, and he may kill everybody.

Norman Lear: Well, if he kills everybody, the problem is over.

Brendan Francis Newnam: There we go.

Norman Lear: Nobody will be troubled by his snoring.

Norman Lear: Yeah — it’s not anything I would recommend, please tell her — but it would be a solution.

Rico Gagliano: Just to call him up. All right, simple, simple idea.

Brendan Francis Newnam: You know, I have this problem. My girlfriend just told me the other day that I snore, and I didn’t believe her, and then she–

Norman Lear: How would she know that?

Brendan Francis Newnam: Well, this might upset you, I know you’re very conservative, but we share a bed sometimes.

Norman Lear: And you’re not married?

Rico Gagliano: These kids these days! I’ve expressed my displeasure at this situation, Norman. He won’t listen.

Brendan Francis Newnam: But I was like, “I don’t snore!” And then, she produced her phone, on which she recorded me snoring, and it was really loud.

Norman Lear: What are you going to do about it?

Norman Lear: I think you ought to move in with that woman in Minneapolis.

Brendan Francis Newnam: There we go. So, Kelly, just send an email, and you have a new roommate.

Brendan Francis Newnam: Thanks for that, Norman. He’s a matchmaker as well as a television show maker, folks.

Rico Gagliano: The guy’s a genius.

Too good for TV

Brendan Francis Newnam: This next question comes from Brian in Miami. Brian writes: “Norman, one of my friends loves to proclaim, ‘I don’t watch television!’ I don’t mind that he doesn’t watch my favorite medium, but he sounds so elitist when he says it, and he wears it like a badge of his good breeding or something. Apparently, he prefers books and caviar, etc. Anyway, what’s a good response?”

Rico Gagliano: Easy-peasy. All right, Norman Lear, his book is called “Even This I Get to Experience.” Norman, thank you so much for telling our audience, succinctly, how to behave.

Norman Lear: Thank you for talking about the book. I couldn’t appreciate it more.