Author Mia Alvar was twice nominated for the prestigious Pushcart Prize for fiction. On June 19, she publishes her first book of short stories titled “In the Country.”  They’re about the experiences of Filipino expats and emigrants, of which she was one.  Here is an excerpt, titled “Shadow Families,” from the collection.

Every weekend, in Bahrain in the 1980s, we took turns throwing a party. Luz Salonga hosted the first one that September of ’86, and as always, we crowded into her kitchen to help. Rowena Cruz soaked rice noodles at the sink. Dulce deLumen made spring roll skins from scratch, painting batter onto the pan with a brush. Rosario Ledesma threaded sweet pork onto thin bamboo sticks. Over the clatter of dishes and the crackle of oil and the smells of vinegar, soy sauce, garlic and fermented fish sauce settling on our clothes and skin, we laughed about children and gossiped about marriage, the noise as much a comfort to us as the food itself. 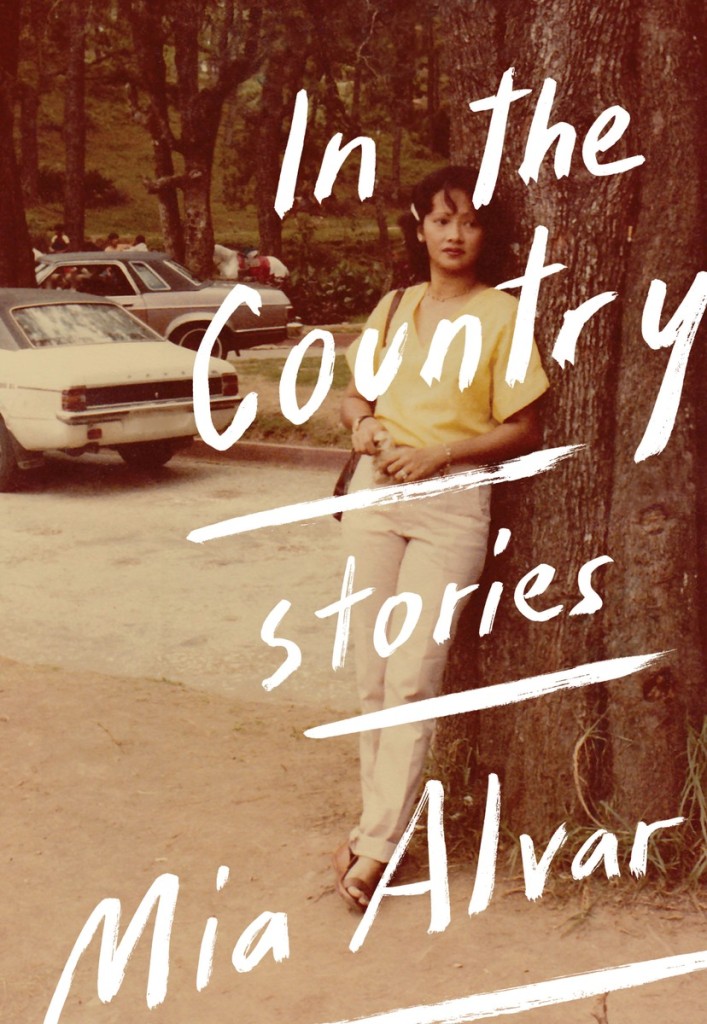 Soon our teenagers would come downstairs, whining of boredom. We lent them the car keys and sent them off to the shopping mall for an hour or two. They’d return with rented Betamax tapes and watch them upstairs: episodes of Top of the Pops, movies that the Ministry of Culture had cleaned up beforehand. (There was no lobster dinner in Flashdance, so far as our teens knew; no montage of oily limbs in leotards.)

Flor Bautista’s son Joseph had hair on his chin already; Fe Zaldivar’s daughter Mary was starting to fill out her blouses. We felt we could do worse than raise them on this small Islamic desert island, where some women veiled from head to toe, where cleavage and crotches were blurry bands onscreen.

Meanwhile the babies, as we’d forever call our younger children, tore through the house with their dolls and robots, trucks and ponies. Our “Catholic accidents,” Rita Espiritu liked to say — she was the vulgar one. We’d given birth to them here on the island, in our late 30s and early 40s.

The teens, who acted more like junior aunts and uncles to them than older siblings, had helped us name them: Jason and Vanessa, Stephanie and Bruce, names they’d accuse us of mispronouncing almost as soon as they could speak. Our babies learned math from Irish nuns and played soccer with Bahraini children and changed their accents at will.

“Watch her bob that head from side to side like a Bumbai,” said Paz Evora of her daughter Ashley, whose best friends at school were Indians. At noon and sundown, when the muezzin’s voice piped from the mosques, our babies ran to the windows. Allahu akbar! they sang, as if they knew what it meant.

As for our husbands, they retreated to a room where smoking was allowed and, implicitly, women and children were not. They turned on the television and spread the Sports pages of the Manama Times between them. A horse track in Riffa held races every week, but gambling there was haraam, of course. And so our husbands made their secret bets indoors, on the same notepads where we wrote the grocery lists.

Now and then a great male chorus erupted from the den, hooting at wins, groaning at losses, ribbing one another for bad calls. They waxed authoritative about odds and breeds, trifectas and photo finishes. For speed and grace, said Domingo Cruz, no horse could match the white Arabian stallion whose genetics had not changed in 4,000 years. Efren Espiritu talked up the sleeper potential of mixed breeds, which combined their parents’ best traits and evolved out of their worst. This was our husbands’ surging, primal release from the neckties and briefcases and paper-stacked desks that bound them through the week.

The wagers, the beer and the sizzling pork bits they ate with their fingers broke just about every law sacred to their Arab superiors. Men who’d seemed pummeled into defeat by the office, us wives, “bills to pay and mouths to feed,” relatives back home in the Philippines who took them for millionaires; men from whom we looked away in embarrassment on weeknights, when they sat on the sofa picking trouser-sock lint from between their toes; these same men became brash and young again, every Thursday afternoon in their improvised gambling dens.

In the evening we came together to eat and to sing into the Minus One, a double-cassette stereo system that let us dial down a song’s vocal track and step in for Tony Bennett or Stevie Wonder. Holding printed lyric booklets (this was before karaoke gave us words on a screen), we crooned into the microphone: “Feelings,” “My Way,” “Three Times a Lady.” Sometimes Vilma Bustamante’s husband changed the lyrics to suit the occasion and Xeroxed them for all to follow. “Mañana (Is Soon Enough for Me)” became “Manama (Is Good Enough for Me),” to welcome a family who’d just arrived on the island. “I Made It Through the Rain” became “I Made It Through Bahrain,” for a family on its way elsewhere.

Outside the walls of Luz Salonga’s house, beyond the fence around her yard, past her street and the gate to our compound, lay the oil fields and refinery that employed most of our husbands. We lived and worked in Bahrain at the pleasure of a people who mystified us. Everything we knew about the Arabs one day could be voided by what we learned the next. Luz Salonga, the most religious one of us, admired their devotion.

“I see them kneeling by the highway at all times of day,” she said, “while I can barely sell the kids on bedtime prayers.” But the Arabs that Fe Zaldivar knew only worshipped sports cars and gold jewelry, mansions and shopping trips to London. To Dulce deLumen, who worked in an emergency room, Arab meant incompetent and backward.

“The best of their doctors couldn’t heal a paper cut,” she said. But Rosario Ledesma didn’t think a country could get this rich, and have all of Asia at its feet, without some special brand of intelligence. Every morning Vilma Bustamante passed their marble palaces in Saar. Every afternoon Paz Evora drove by crumbling concrete villages in A’ali. It didn’t matter that our own community had its kings and hobos, geniuses and fools, heathens and believers; this didn’t keep us from wanting a more perfect knowledge of our hosts, a clearer definition.

We’d arrived on their island like the itinerant father in the fairy tale about a beauty and a beast, our houses fully furnished by some unseen master. Would he reveal himself to be a prince or monster? We decided early to behave ourselves rather than find out. In their shops and on their streets, we wore hems no higher than the knee, sleeves no shorter than the elbow, necklines that would please a nun. We lived like villagers at the foot of a volcano, hoping never to offend the gods who governed our harvest and our wealth.