Marlon James’ universe of fictional characters includes the gunmen, their families, and bystanders who happened to be in the wrong place at the wrong time on that fateful December day in 1976. One of these is Nina Burgess – an unemployed secretary who’s been stalking Bob Marley, and who hopes that he’ll save her from financial ruin.  In this excerpt we find her at the gates of his house, recalling her first fling with “him.”

Danny was from Brooklyn. A blond-hair man who came down to do research for his degree in agricultural science. Who knew that the one thing Jamaica created that was the envy of science was a cow? Anyway, we were seeing each other. He would take me around to Mayfair Hotel uptown for a drink and suddenly there would be Caucasians, men, women, old, young, all as if God just waved a wand and poof! White people. I am what they call high brown, but even with my skin colour seeing so many white people was a shock. Somebody must have mistook this for the North Coast for there to be so many tourists. But then 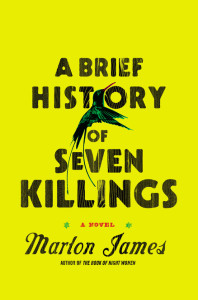 one would open his mouth and patois would tumble out. Even after going there too often to remember, I would pick my jaw off the ground every time I overheard a white man chat bad. Wait! Ho ho ho, is you that, busha? Ho ho ho, can’t see you these days, man, you get rich and switch? They didn’t even have a tan!

Danny would listen to really weird music, just noise that he would play loud sometimes to piss me off. Just noise, rock and roll, the Eagles and the Rolling Stones and too many black people who should just stop acting white. But at night he would play a song. We broke up almost four years ago, but every time I look outside the window I sing two lines over and over. I do believe. If you don’t like things you leave. Funny, it is because of Danny that I met him. Some party that the record label had all the way up in the hills. Bush people and white people are all that live up here, huh? I remem- ber saying. Danny said he never know black people could be racist. I went to get some punch, poured it slow to kill time then saw Danny talking to the label boss. I was exactly what these workers thought I was, some uppity naigger fucking the American. Right beside Danny and the label boss was him, somebody whom I never thought I would meet. Even my mother liked his last single, though my father despised him. He was shorter than I ex- pected, and me, him and his manager were the only black people there not asking if we would like our drinks freshened up. Standing there he was like a black lion. How the sexy daughter just come ’pon the man so, he said.

Fifteen years of schooling on how to talk proper and that is still the sweetest thing I ever heard come out of a man’s mouth.

I didn’t see him again until long after Danny went back and I followed my sister Kimmy, who has yet to call her parents after they’ve been robbed and her mother possibly raped, to a party at his house. He didn’t forget me. But wait, you is Kimmy sister? Is where you was hiding? Or you was like Sleeping Beauty, eh, waiting for the man to wake you up? The whole time I’m splitting in two, the part of me that I like to shut off after morning coffee said yes, reason with me my sexy brethren, the other part going what do you think you’re doing with this lice-infested Rasta? Kimmy left after a while, I didn’t see her go. I stayed, even after everybody left. I was watching him, me and the moon when he went out on the verandah naked like some night spirit, with a knife to peel an apple. Locks like a lion and muscles all over and shining in the moon. Only two people know that “Midnight Ravers” is about me.

I hate politics. I hate that I’m supposed to know. Daddy says that nobody is driving him out of his own country but he’s still thinking gunmen are somebody. I wish I was rich, I wish I was working and not laid off and I hope he would at least remember that night on his balcony with the apple. We have family in Miami. The same place Michael Manley told us to go if we want to leave. We have a place to stay but Daddy don’t want to spend any money. Damn it, now the Singer is so big nobody can see him anymore, even a woman that know him better than most women. Actually I don’t know what I’m talking about. This is the dumb shit women always think. That you know a man or that you’ve unlocked some secret just because you let him into your panties. Shit, if anything I know even less now. It’s not like he called me after.

I’m across the road, waiting at the bus stop, but so far I’ve let two pass. Then a third. He hasn’t come through the front door. Not once, not for me to run across the road that instant and shout, Remember me? Long time no see. I need your help.