It’s spring time in New York City, which means dining outside (finally) in places like Central Park, where, near a little pond, there’s a food stand called “Knish Knosh.” So the other day, Brendan met with Laura Silver, author of a book about the knish called “Knish: In Search of the Jewish Soul Food,” to talk about the hearty snack. Brendan started off by asking her to describe these little bites of Jewish soul food.

[Ed. note: A special knish playlist from Laura is a the bottom of this piece.]

Laura Silver: Imagine a lovingly-wrapped hunk of onion spiced potatoes in this cradle of a thin dough that’s very friendly, portable, and usually not too expensive.

Brendan Francis Newnam: It’s one of these kind of peasant kind of foods that fills the stomach quickly and cheaply. 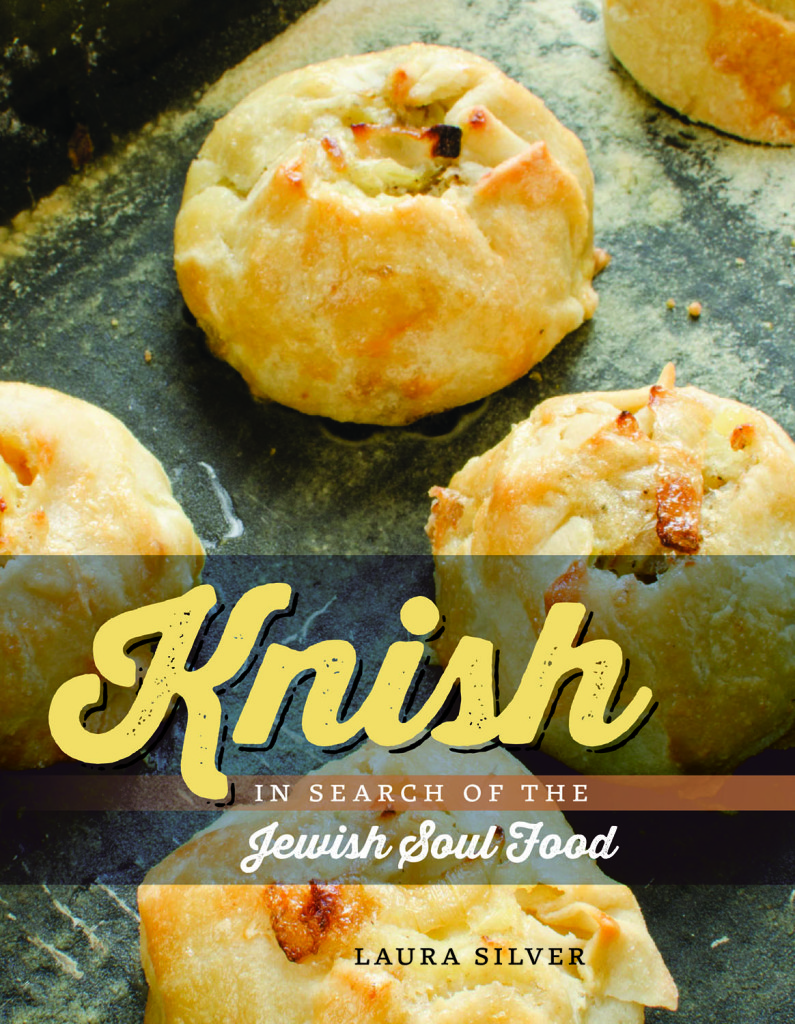 Laura Silver: Exactly. They fill the stomach and the gut in the bigger sense. I believe that sense of being full, also rises up to the heart.

Brendan Francis Newnam: Yeah. So you talk a lot in this book about the role of the knish in culture and to Jewish culture in particular.

One story I enjoyed, was a woman talking about her new daughter-in-law, and she was afraid that her daughter in law was going to make her son too snobby and then tell — what happened that made her feel like things were going to be okay.

Laura Silver: Well, because she baked knishes, that was the barometer of her okay-ness.

Brendan Francis Newnam: And she’s like, “No one who cooks a knish can be stuck up.”

Laura Silver: Exactly. If you cook a knish, you’re a real person.

Brendan Francis Newnam: And the other thing about the knish is, practically speaking, it’s — to make a knish it’s not a delicate process. It’s not like you’re just like grilling a fish or something like that. It’s like you’re really working the dough, you’re making potatoes, you’re chopping onions. It’s labor intensive.

Laura Silver: Right. It takes time to make knishes. And I think it takes intention, you need some space. The tradition talked about making a tablecloth of dough. So imagine rolling a sheet of dough that wide and thin. Something thin enough you could read a newspaper through, or my book.

Brendan Francis Newnam: Sorry. Your book is an exhaustive exploration of the knish. Where does it first show up?

Laura Silver: The knish first appears in literature in 1614 in a Polish poem that comes from a town in modern day Ukraine. I’m not convinced that the knish was inherently Jewish back in 1614. Because I found later instances of the knish being used for mourning rituals in the Christian and Catholic tradition. But, I have identified a knish, a historic knish corridor which extends from modern day Lithuania through Poland, Bialystok, Belarus and parts of Ukraine.

Now, you may be thinking that corresponds with the pale of settlement where Jews were, and that’s true. But this is a sub section.

Brendan Francis Newnam: Often on our show we’ll do a profile of like a new food item, or like an old food item coming back like a kolache in Texas, which is filled with meat or which is kind of a cousin of this.

Brendan Francis Newnam: It’s a knish-ian cousin. There’s so many puns to be had here. But I feel like the knish hasn’t really been part of this food renaissance.

Laura Silver: There is a guy in California who is making knishes in flavors like wasabi and white chocolate. He has a curry beef in there. He did a St. Patty’s Day knish.

So there’s a lot of innovation to be had, but the knish I think is getting ready for its full-fledged renaissance.

Brendan Francis Newnam: You think it’s right on the cusp of returning?

Brendan Francis Newnam: Can we say it’s right on the k-nusp?

Brendan Francis Newnam: You draw the line there?

Laura Silver: A pun has to be — it has to be earned.

Brendan Francis Newnam: I thought that was… okay you’re right. Let’s taste the knish here. You have the kasha. I have the potato. They’re beautiful. They’re like big, big hockey pucks, overstuffed hockey pucks.

Laura Silver: No, no. But it has the coziness of teddy bear.

Brendan Francis Newnam: It does. It does look kind of cozy.

Laura Silver: What’s so great about this is the dough is thin, and you almost feel like you’re eavesdropping. You’re like a voyeur looking into the inside of it.

Brendan Francis Newnam: It’s kind of sexy now that we talk about it.

Laura Silver: Right. It’s great. It’s hefty, yet sexy. Does it get better?

Brendan Francis Newnam: Well, let’s give them a taste here. [Tastes the knish] And it’s very good. It feels like this would — if I ate one of these, I would feel fortified for the day.

Laura Silver: Exactly. And this has such great onions and you don’t need a lot to feel good.

Brendan Francis Newnam: Talk about something directly right now. The knish, this is not health food. This is very heavy food.

Laura Silver: Knish is not light, but you can have a cocktail knish.

Brendan Francis Newnam: When I saw cocktail knish in your book I thought it was going to be like filled with booze but it’s actually like cocktail hot dogs.

Laura Silver: If anyone can create a knish filled with booze, it’s The Dinner Party Download.

Brendan Francis Newnam: A gin and tonic knish. That would be great.

Laura Silver: Well, it’s like those little chocolate bottles with cognac inside. We could do the same with the knish.

Brendan Francis Newnam: When did you fall in love with the knish?

Laura Silver: The knish was just something I took for granted till my favorite shop went out of business in 2005 or so. But, I’d say the obsessive love affair began around then, because then it became a quest. Something I loved was endangered and gone and I had to figure out what happened and then suddenly I had to know everything about it.

And I’d say the biggest discovery was the fact that my maternal grandmother was actually born in a Polish town called Knyszyn.

Laura Silver: No. There’s a Yiddish word that corresponds called bashert. It’s like this is your fate. I was direct descendant of the knish.

Brendan Francis Newnam: Are there any knish puns you approve of?

Lauren was kind enough to share a list of some knish-related songs with us! Check it out below: