This week, the film “Now: In the Wings On A World Stage” — opening in select theaters and online — documents the months Spacey spent touring the world, starring in a massive stage production of Shakespeare’s “Richard III.” The show was mounted by The Bridge Project — the transatlantic theater company he formed with his “American Beauty” director Sam Mendes.

Rico Gagliano: The Bridge Project consciously brings together American and British actors in one company.  Why?

Kevin Spacey: The experiment, really, was about Sam wanting — instead of sort of insisting that everybody has to speak in a kind of British accent — that we could bring Americans and Brits together and, no matter how they sound, you could make Shakespeare come alive. An audience would just accept that that that was the way Lady Anne sounded, and that was the way Clarence sounded.

Rico Gagliano: Why was that important to you?

Kevin Spacey: Because we wanted to have this experiment of showing that we could bring our two cultures together and do Shakespeare, and it wouldn’t be shit. And in fact, I remember Sam was like, “Wouldn’t that be a great review for us, though? ‘The Bridge Project: not shit.” We thought that was a good idea.

Rico Gagliano: I’m going to have to bleep out the operative word of that for radio, but I think people will get the picture.

Kevin Spacey: They’ll get the picture.

Rico Gagliano: Why “Richard III?” For this gigantic globetrotting adventure?

Kevin Spacey: Well, it was really Sam’s choice, ultimately. We had a lot of different plays on the table, but ultimately, Sam [told me], “I just want to see you play this part. I think it’s a great part for you.”

That was when we decided that we would only do one play instead of two, because I said, “I can’t do more than this. It’s the second longest role in Shakespeare’s canon, so give me a fucking break.”

Rico Gagliano: It’s interesting that Sam Mendes would want you to play this particular role, because I do see a lot of similarities between it and your “House of Cards” role.

Kevin Spacey: There’s a reason for that. The original role of Francis in the book ‘House of Cards,’ and the original British series, was entirely based on Richard III. That is why the direct address exists in ‘House of Cards.’

Kevin Spacey: Because although you might think that Ferris Bueller invented direct address… you’re wrong! It was actually William Shakespeare.

Rico Gagliano: I may be Generation X, but I did know that.

Kevin Spacey: [laughing] So the point is that of course there’s a parallel there, because one is based on the other.

Kevin Spacey: You know, there is something… I mean, it isn’t just me. It’s audiences around the world are fascinated by this kind of thing. That was the interesting thing about watching the audiences around the world really kind of enjoying being the co-conspirators to Richard III. It’s no different than the people who stop me on the street now and say, “I love Francis! He kicks ass!” And you’re like, “Yeah, but…

Kevin Spacey: Well, in some people’s eyes, yes!  I can’t judge the characters that I play. I just have to play them.

Rico Gagliano: Something that I love about you in all your roles are the moments of quiet. There is this moment in almost any role I’ve seen you play, where you’ll go from whatever emotion you’re experiencing in the scene… and suddenly go to this icy stare that just says: “I’m not a man to be messed with.” Has that always been something in your arsenal?  Was there a moment where you realized that you could draw on that?

Kevin Spacey: I don’t know. I mean, look… I’m not standing outside of myself and seeing myself. I’m in it. It’s the reason that one never reads reviews. There are times when things are pointed out to you that you’re completely unaware of – and I don’t want to become aware of them because I don’t want to become self-conscious about them.

Rico Gagliano: Do you watch your films after you film them?

Rico Gagliano: So, this film is mainly… it’s not really about the play, so much as the making of the play. It’s going behind the scenes and seeing how a production like this gets mounted and tours.

And it’s about the work of that, but it’s also about the fun of it.  And there were two things I wanted to ask you about: the kind of actors’ games that are portrayed in the film. First of all, ‘angel cards’?

Kevin Spacey: Oh, angel cards are great. All right: angel cards are cards that are in a little box, and on each card is a word. And the word could be ‘simplicity’… ‘flatulence’… or the word could be ‘strength.’ Everyone in the dressing room has to pick a card just before the performance, and you have to infuse your performance that night with whatever is on your card.

Rico Gagliano: Well, that’s my question: what’s the worst that you ever got, and had to therefore infuse your performance with?

Kevin Spacey: I can’t say it, because it’s worse than any word that you’re going to already have to bleep.

Rico Gagliano: Oh my God, my brain is racing right now. What could that possibly be?

Rico Gagliano: One other thing: ‘corpsing.’

Kevin Spacey: Oh!  So, for people that don’t understand what the word ‘corpsing’ means, it essentially means that you are on stage in front of an audience, and you start laughing, and it’s not part of the play.

By the way, Judi Dench is the most notorious corpser in all of British theatre.

Rico Gagliano: She breaks down laughing?

Kevin Spacey: Sometimes they have to stop the play because she has to go to her dressing room to compose herself.  So… corpsing happened quite often through the run of Richard III.  And it was either happening because I was the instigator, where I would look at someone in a particular way on stage, and sometimes I’d wink at them.  Or sometimes I’d whisper to people. I’d, like, walk up to them while someone else was talking and say, “What are you doing?  Why are you looking at me? And why are you holding that balloon?” And they’d be like, [whispers] “Stop it.” 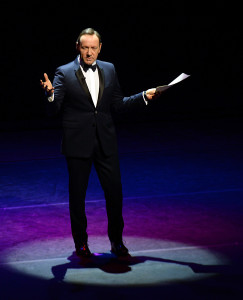 Rico Gagliano: Are you immune? Because you seem to be immune in the film.

Kevin Spacey: Oh, no! Are you kidding? There are shots of me lying and rolling on the ground!

Rico Gagliano: That was in rehearsal, I thought!

Kevin Spacey: No! That was backstage after I’d just walked offstage because I just said gobblygoop in front of a thousand people! And I said it oddly in iambic pentameter, but it made absolutely no sense! It was gibberish! I was like, “Peanut butter on your mother’s stock!!” And then I walked offstage.

Rico Gagliano: Why did you do that? Was somebody else…

Kevin Spacey: Who knows?!! It came out of my mouth. This is the thing about when you’re on stage and you have to talk very quickly and you’re doing Shakespeare. Sometimes it just comes out garbage. You just don’t say whatever it is that Shakespeare wrote, or you said it too fast.

Rico Gagliano: I want to go to that performance.

Kevin Spacey: Oh, believe me. There were lots of those moments in lots of performances.

Rico Gagliano: We have two questions that we ask everyone. The first one is: If we were to meet you at a dinner party, what question should we not ask you?

Kevin Spacey: ‘What don’t we know about you?’

Rico Gagliano: [sighs] You knew about this, didn’t you? Ah, you bastard. Yeah: Our second question is “Tell us something we don’t know.”

Here’s the thing though — I hold the trump card — It doesn’t have to be about you. It could be about anything in the world. It’s like trivia; something that would blow people’s minds at a dinner party.

Rico Gagliano: That doesn’t mean anything.

Rico Gagliano: I guess I can’t.

Kevin Spacey: I want you to infuse your next interview with that.

Rico Gagliano: All right, well, look. Here’s something that in researching you, I didn’t know — maybe some in the audience will know — but you are known to be a very good impersonator.  And I’m wondering if you could grace us with an impersonation that would play well on radio. Something nonvisual.

Kevin Spacey: [Imitating President Clinton] I love that House of Cards. Oh no, it’s good — I’ll tell you why.  Ninety-nine percent of that show is correct… and the one percent they got wrong is you could never get an education bill passed that fast.