If you’ve watched any movies or TV shows in the last thirty years or so, you’ve almost certainly seen actor Jeffrey Tambor in one of his dozens of standout character roles.  Best known as the self-absorbed TV talk show sidekick Hank on the breakthrough sitcom “The Larry Sanders Show” and as George Bluth, Sr. on “Arrested Development” — Mr Tambor’s now earning raves for a lead role. On Amazon’s dramedy web series “Transparent,” he plays the closeted, transgendered Mort, who reveals to his kids that he’s coming out as Maura. His funny, heartbreaking performance is already hotly-tipped to land him an Emmy.  This week Jeffrey tells Rico about his immersive prep for the role, and about his spacey Bar Mitzvah.

Rico Gagliano: So do we!  So this is going to be perfect.

Jeffrey Tambor: No, I do. At Wayne State University, I just remembered, I used to do radio plays. I’m just recalling that.  Because I just took off my shoes and put my feet up and I went, “Oh yeah, that’s what you can do on radio.”

Rico Gagliano: You did just put your feet up. You’re making yourself comfortable.

Rico Gagliano: You did radio plays in college?

Jeffrey Tambor: Yeah, and I remember because I learned how you put the script down noiselessly on the floor.

Rico Gagliano: That’s funny because I can hear you right now sort of sliding around, so you apparently forgot that.

Jeffrey Tambor: Yes. Those are actually my teeth.

Rico Gagliano: All right, let’s talk about this wonderful show that you are a part of right now —

Jeffrey Tambor: Have you seen it?

Rico Gagliano: I have.

Rico Gagliano: You, of course, are not transgender, but you show so much obvious sympathy for this character. What is your emotional connection to Maura, do you think? 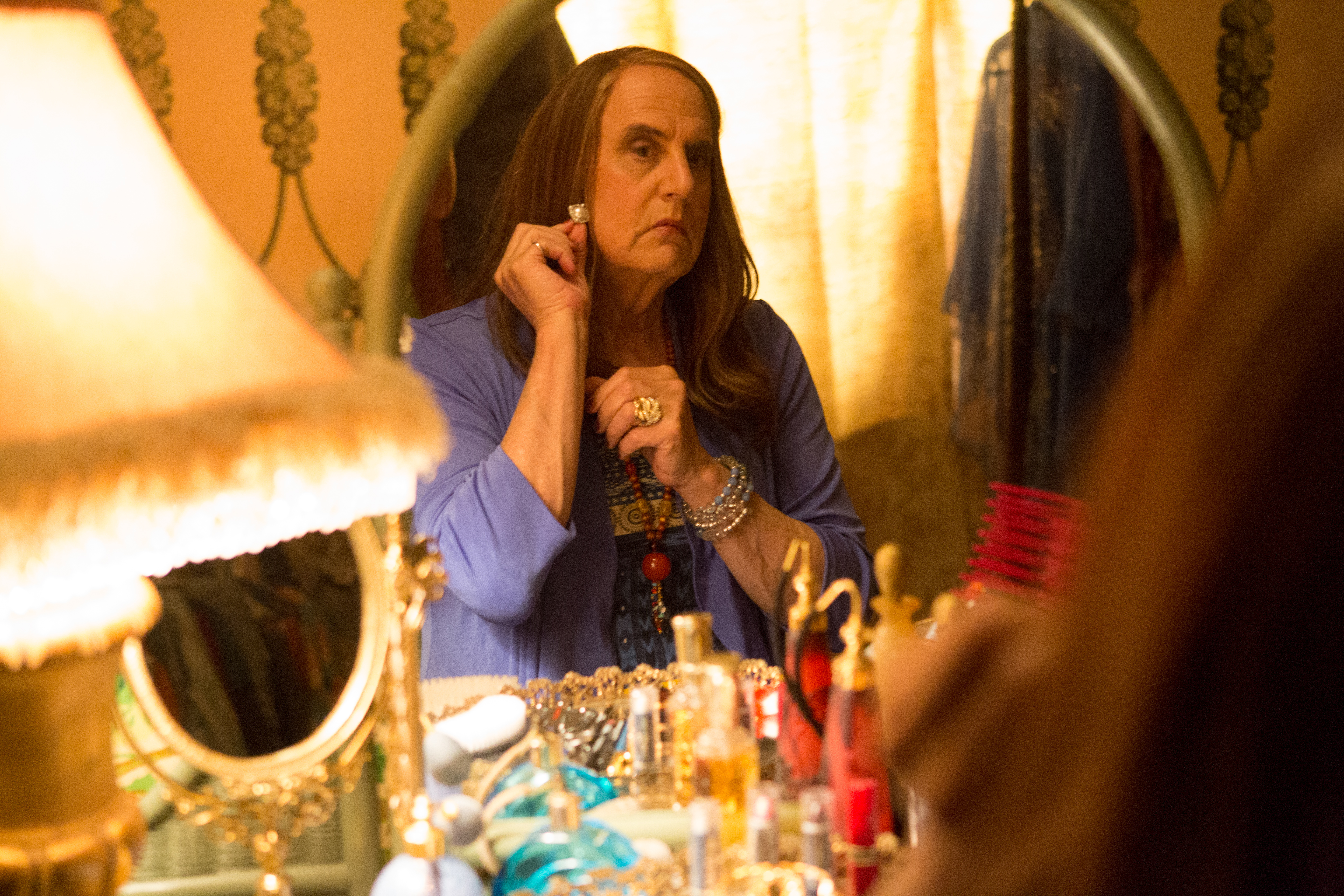 Jeffrey Tambor: That’s a great question. The fact that she’s courageous… she’s 70… she has an arthritic left knee… she has reading glasses. I guess what I’m saying is that she’s very human, and I love the break she’s making for her authenticity. I will be very honest with you. The degree of difficulty [of the role] also led me, because I went, “This is not going to be 1, 2, 3, kick,” and I like that in life. But also, it’s just… look, I did “Arrested Development” and “The Larry Sanders Show” (or, as my mother used to say, “The Hank Kingsley Show”), and, you know, I thought I was going to sit down and read in a library the great works of Dickens.

Rico Gagliano: Like, you were gonna retire?  You had done enough, basically?

Jeffrey Tambor: Well no, it’s just… these roles don’t come along. And this thing — “Tap, tap, tap, Jill Soloway wants you” — and I read it within 15 minutes. I was on my way to my hotel in Santa Monica, California, and by the time I got to the hotel I was calling my agent, saying, “I’m in.” They said, “Well, don’t you want a meeting?” I said, “I’m in!”

Rico Gagliano: What was on your mind when you and the filmmakers actually had to portray a person coming out as transgender? What did you feel you wanted to bring to it?

Jeffrey Tambor: Well, I like to say — and perhaps too glibly, and I don’t mean it to sound that way — but my politics, Jeffrey Tambor’s politics, are in Maura, and in the creation of Maura.  Making her as human as I can make her, and as well-portrayed as I can. Not for the reviews, but because of this community that needs wonderful light shone on it. As well as being, I think… the pitch of this show is really about what secrets can do in a family. And it answers the question, “If I change, will you still love me?”

Rico Gagliano: I actually wanted to ask you about that. There’s a moment in the third episode, I think it is, when your character has made her first transgender friend, and this friend tells you basically to expect your family to abandon you after you come out. Is that what typically happens?

Jeffrey Tambor: I would imagine that is not rare. Transgender people and people who make decisions like this are other-ized in our society. And people are ignorant, squeamish, and phobic.

Rico Gagliano: How did you prepare for this role? Did you speak with people from that community? I’m imagining you did.

Jeffrey Tambor: Well, there were three consultants from the transgender community. They would come to my hotel, and they once came and we went out on our first field trip. We went out dancing to a club in North Hollywood —

Jeffrey Tambor: Yes. And we went dancing, and I remember walking through the hotel, and I thought I was going to die, basically.

Rico Gagliano: Were you in costume when you did that?

Jeffrey Tambor: Oh yes, I’m sorry, I didn’t tell you the whole story. Yes! I was in wig, and I was totally en femme, and I remember we couldn’t get our car. They couldn’t find our car. I stood there forever at the valet station. These were important things to me. I went shopping as Maura, and then I remember sitting outside next to civilians, and I was just scared. And I went, “Do not ever forget this moment.”

Rico Gagliano: How did others react to you?

Jeffrey Tambor: There was one person who walked by me at the market and sort of smiled and shook their head, which I thought was very odd.

Rico Gagliano: Do you think they recognized you?  Like, “Hey, what’s up with Jeffrey Tambor?”

Jeffrey Tambor: I don’t know. My daughter came — my 7-year-old daughter — came to the studio on the day her Daddy was going to get a mani-pedi, and I thought was a singular father moment for me in my life. And I prepped her at home by saying, “Hmm, uh, erm, uh…” showing pictures, “Uh, erm, ah…” I couldn’t find the words. And finally she goes, “Daddy, Daddy I get it. Your character is more comfortable being a woman.”

Rico Gagliano: So you raised some sensitive children.

Jeffrey Tambor: No, no. Let me correct you.  And I like what you said, but I have children.  And children have not learned hatred. 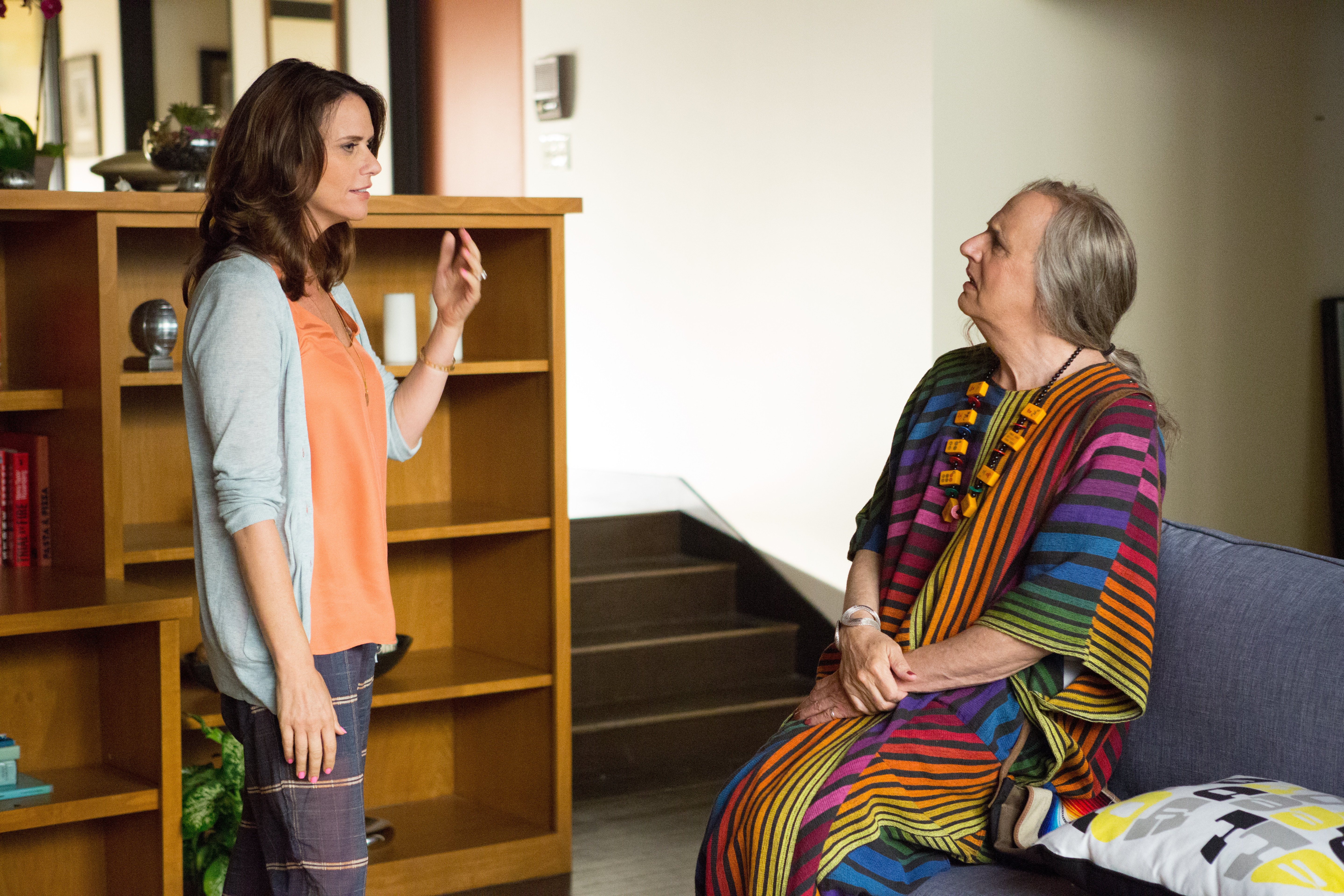 Jeffrey Tambor with Amy Landacker, one of his *on-screen* daughters in “Transparent.”  Credit: Amazon Studios.

Jeffrey Tambor: Please. And the answer is 16. “When did I lose my hair?”

Rico Gagliano: The first question is: If we were to meet you at a dinner party, what question would you least like to be asked?

Rico Gagliano: For those who don’t know, that’s the catchphrase of Hank from “The Larry Sanders Show” — “Hey now.”

Jeffrey Tambor: But Henry Winkler told me a very interesting thing. He told me, you know, “It’s their first time. It’s your 500,000th time,” or something like that.  And he’s right.

Rico Gagliano: Of course. So do you do it for them?

Jeffrey Tambor: Me too.

Jeffrey Tambor: Let’s see… Oh, I’ll tell you one thing: My mother, God bless her… there used to be a drug called Miltown. It’s a tranquilizer. And my mother gave me half a Miltown at my Bar Mitzvah, because I said I was nervous. She said, “Here, take this.” I’m not kidding — I was high during my Bar Mitzvah.

Rico Gagliano: You *did see God. You became a child of God.

Jeffrey Tambor: I was the only Bar Mitzvah boy who snapped his fingers in rhythm to the Torah.