Cartoonist Jeff Smith is a super-hero in the world of comic books and graphic novels. His primary comic book series, “Bone” earned 11 Harvey Awards (considered the Oscars of comics) over 13 years in print. His more recent comic book series, the dark sci-fi noir starring Nikola Tesla “RASL” has just been published as a collection and in November he launches a new webcomic series, “Tüki Save the Humans.”

This year he was tapped to edit “The Best American Comics 2013,” a volume collecting some of the best new work from all corners of the comics universe. He gave us a list of some of his favorites among those favorites.

My name’s Jeff Smith, creator of “Bone.” I was also the editor of the most recent volume of “Best American Comics 2013,” in which I spent an entire year reading every comic book in the world, and the 9 -year-old in me was ecstatic. I’m not exaggerating- I went to the grocery store one day, bought some milk and some cookies, came back to my studio and sat and read comics all day. And then the next day I drank bourbon. So, after all that weeding out of this pile of fantastic cartoonists, for you I’ve come up with the cream of the independent underground crop, and here they are. 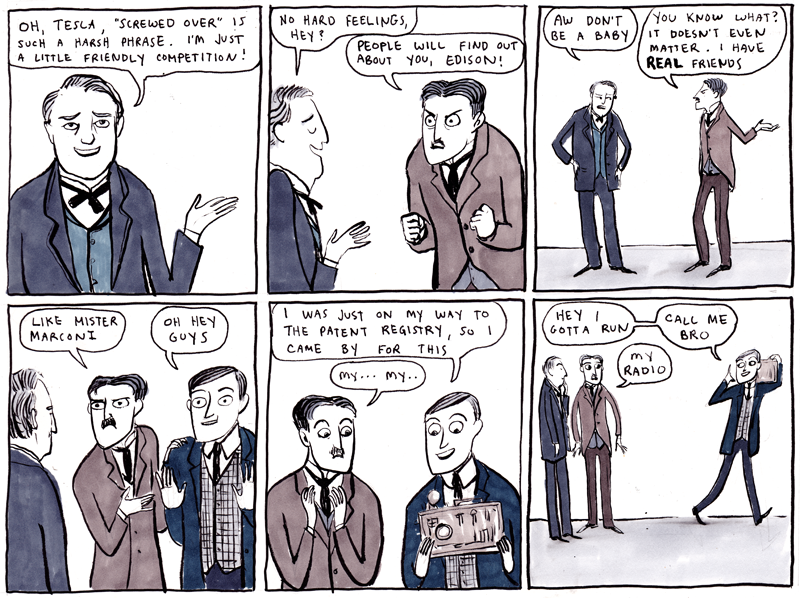 It’s a very funny, very humorously drawn strip, but the idea behind the strip is that she takes characters from history- people like George Washington or Nikola Tesla, and throws them into very contemporary situations.

The piece I picked for the collection was a perfect example. Wonder Woman is standing in the street, and there’s obviously a bad guy fleeing with bags of money, and there’s a woman going, “Why aren’t you running him down? Why aren’t you chasing him?” And Wonder Woman just looks at her and says, “I’m wearing a strapless bathing suit and high heel boots. What would you do?” Then she says, “Hey, do you want to see me use my lasso of truth?” And she puts it around herself and she turns to the person and says, “Shut up.” She put the lasso of truth on herself and told the lady to shut up. Oh my.

What it is I like about Kate’s work is really the timing. There’s a real art to the syntax between any two panels in a comic. You have to have the story move, you have to have the character move, and all those things create cues to the readers eye and brain, and someone who’s a master of the art form can just use the slightest change in a drawing to create humor. It’s really, really funny. You have to actually just see it. 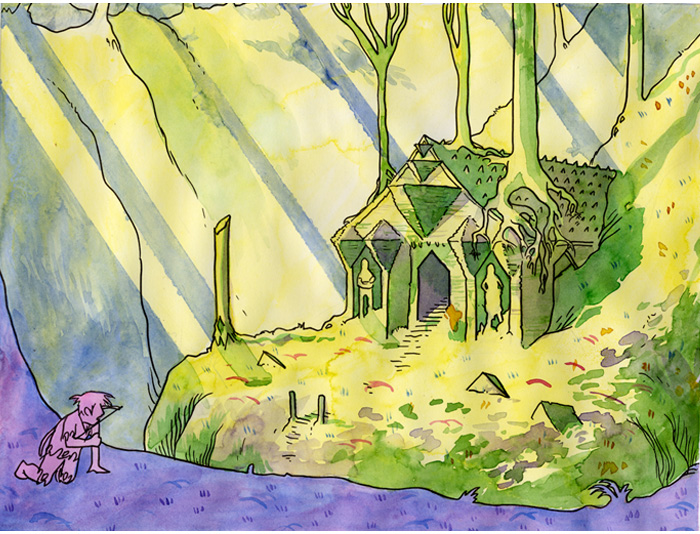 From Haunter, Part One
My second pick is a very talented young guy named Sam Alden, and he does a web comic called “Haunter.”

It’s a comic that has no words. It’s fantasy-based. It follows a young Robin Hood-ish woman who just has like a long bow, hunting through the woods, and she comes across an ancient temple across a broad river. She swims the river, goes into the temple, and ends up unleashing some ancient gods.

None of this is explained. You begin to feel like you’re perhaps on another planet or in another dimension, and you don’t know.The story is very dreamlike. It does feel a little bit to me like kind of an Alice in Wonderland tumbling down and going further and further, but I think that’s kind of the fun of it.

It’s very difficult to do a wordless comic, and I have done long segments of wordless comics, but when I see someone really go for it, I know they’re reaching to get it. Cause it is hard, cause the words, they can be a crutch. You can just explain things, you know, you can- sometimes people even explain what you’re looking at. But once you remove the words, it’s really just between you and the reader and the two of your imaginations kind of meeting. 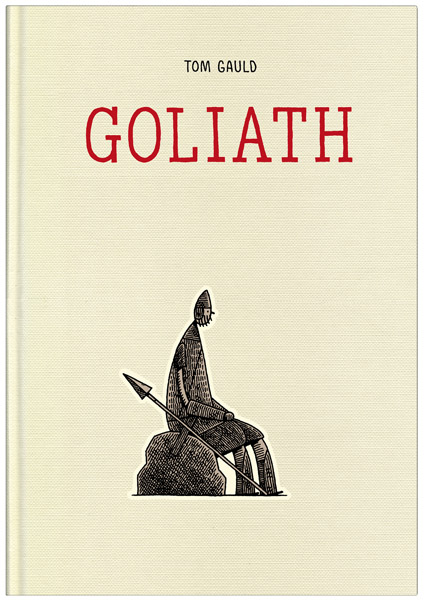 Well my next choice is Tom Gauld, a British cartoonist.

He’s done a couple of books now, one of them was called “Goliath,” and it’s the story of David and Goliath told from the viewpoint of Goliath, which is a very interesting idea, and especially the twist he puts on it is that Goliath isn’t this big ferocious monster, but instead he just happens to be the biggest guy.He’s a freak who’s really large, but he’s very quiet, but because he’s so big, he’s always the one that the guys go, “Come on, you go out, you go out and do it.” But that’s only half the story.

He’s really, really talented, and his visuals are as funny and interesting as his stories. Comics is a medium where story and words and the pictures all have to interact. Since we’re doing a dinner party, they interact like a gravy all over your stuffing and chicken and mashed potatoes.