Niki Russ Federman: It’s a young herring, and this time of year it hits its peak omega-3 fat content. Normally, it’s about 16% omega-3, this year it’s 18%, so it’s kind of a record high. And what that means as a food, what that translates into, is this piece of buttery, delicious, gastronomic heaven.

Brendan Francis Newnam: So is that what you’re looking for in a herring? That’s what distinguishes one type of herring from another, it’s the fat content?

Niki Russ Federman: Well, there are all different kinds of herrings, and all different herring preparations. And here at Russ & Daughters, if you look at our herring showcase, you’ll see about ten different kinds of herrings from pickled herrings, smoked herrings, herrings marinated in cranberry-clove sauce or curry, mustard, and dill. We have German rollmops, a Bismarck-style herring, and the Holland herring, which is different from all of those because it’s basically an unadulterated herring.

Brendan Francis Newnam: It’s not pickled, it’s not seasoned in any way. 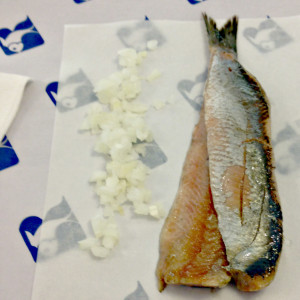 Niki Russ Federman: Think of this as the sushi version of herring.

Brendan Francis Newnam: And how did the Holland herring of all these different herrings, we have French herring, and Swedish herring, how did this one become the one that we eat sushi-style?

Niki Russ Federman: Well, this particular herring just lends itself so beautifully to just being enjoyed as-is. In Holland the catch for this herring is a source of national pride. It’s actually a national holiday when the first fish come into port. So it’s a really big deal.

In Holland you’ll see the equivalent of a hotdog cart in New York, you’ll see a herring pushcart in Holland where people eat these herrings on the street, and at Russ & Daughters my family has been importing these herrings for over ten years now, and every year we’ve just seen an increase in–

Brendan Francis Newnam: So have they been doing this in Holland for a while? This isn’t one of those Beaujolais things, where the herring association decided that they were gonna throw a party?

Niki Russ Federman: Right, this is not a marketing ploy. This has been going on for hundreds and hundreds of years. And herring actually is historically a fish that has been so critical to so many countries. Wars have been fought over herring.

I think part of the intensity of feeling like people have around herring, this very humble fish, is partly that when you eat a herring, you’re eating foods that our ancestors have eaten.

Brendan Francis Newnam: I’m guessing that herring, due to its size, is lower on the food chain, so that means it’s more plentiful than other fish?

Niki Russ Federman: It’s more plentiful. It is also because it’s a small fish that it’s high in omega-3’s, but very low in mercury.

We have customers here at Russ & Daughters who are literally in their hundreds – and if you ask them what they attribute their longevity to, they will say eating herring.

Brendan Francis Newnam: Can I try that? Can we? 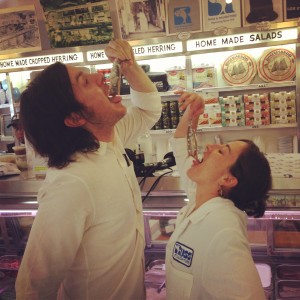 Niki Russ Federman: Yeah, let’s do it. Actually this time of year I try to eat at least one of these herring a day, so you came just in time.

Alright, so we’re looking at two herring, they’re about what, five, six inches, six inches long, delivered next to a side of minced onions. So do I need to know anything? Is there any particular wrist action?

Niki Russ Federman: Yeah. The most traditional way to eat this herring is almost as if you were a seal, just by taking the tail, we have two filets of herring that are attached at the tail, the little tailbone, and you just take that tail, and you lift the herring up over your head, and you tilt your head back, and you just eat it like a seal. I’ll demonstrate for you, how about that?

The onions are optional. It’s delicious as-is, so you can kind of fold the wax paper, and just stick the onions onto one side of the herring, and then you take it by the tail, lift it up-

Brendan Francis Newnam: And you’re just snapping at it like as if you were a seal, if a seal had hands.

Brendan Francis Newnam: So I’m gonna fold my fish with my onion and kind of… it’s like the first time I’m making a paper airplane. And so now the onions have stuck to it. How do we know the onions aren’t gonna fall down?

Brendan Francis Newnam: Okay. Wow. It’s delicious. It’s really, really good. It just disappears. Man. It’s not as, I mean I’ve had herring before, but it’s not as fishy as like the rolltops or something like that.

Niki Russ Federman: No, not at all. And actually, for whatever reason, herring has gotten a bad rap, and people have sort of misconceptions or they’re sort of primed not to like it, so we kind of have to open them up and when people then taste it, they just are blown away.

Brendan Francis Newnam: Although herringbone has always been very popular in both tweed jackets, and now in tile, and now I find more.

Niki Russ Federman: Umm, so herring is making a comeback in design and fashion and food!