“When I think of Iraq, I think of Donald Rumsfeld,” explained documentararian Errol Morris about his newest film, “The Unknown Known,” in which he extensively interviews the former Secretary of Defense about the Iraq war. It is Morris’ second film focusing on an American Secretary of Defense. The first, 2003’s “The Fog of War,” featured Robert S. McNamara as the central figure.

“For both Vietnam and Iraq, the Secretaries of Defense were the front-men. They were the men selling the policies to the American people,” Morris said of his recurring fascination with these men who operate just outside the Oval Office, rather than telling stories of war from the perspective of the Presidency.

While the premises of the films might be similar, the men at the center of each seem very different, particularly in how they perceive their own role in history.

“At the heart of ‘The Unknown Known is something really different from [McNamara’s sense of guilt portrayed in ‘The Fog of War’]. It is a man avoiding the history he was was so much a part of, refusing to reckon with it, not even clearly seeing it at all.[…] In the end, I am sure of one thing: he just lost touch with reality. 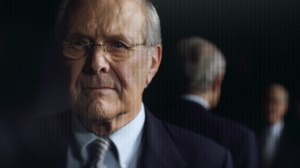 This film is the massively-acclaimed, Oscar-winning filmmaker’s 13th documentary as director, in a career that has included films such as “The Thin Blue Line,” “Gates of Heaven,” and “Tabloid.” He is known for his insightful interviewing style and an invention he named The Interrotron which he uses to capture his distinctive visual style of subjects looking unflinchingly directly into the camera, establishing in the final film an instant – at times deeply unsettling – sense of intimacy with the audience.

Morris believes the reason to make a documentary is to compile interviews and evidence to get closer to the truth of a thing, a process which, in a sense, he began early in life, in a very personal way.

“My father died when I was two years old and I had no memories of him at all. All around the house there were pictures of my father, and I always wondered, ‘Who is this man?’ without ever really being able to answer the question. All kinds of conflicting accounts from my aunts and my uncles and my mother; the feeling of an enduring mystery which I could not answer.”