David Picker ran Hollywood studios like Paramount and United Artists, and in his new memoir, “Musts, Maybes, and Nevers: A Book About the Movies” he tells tales from fifty years of producing films. Here he shares a story about working with one particular creative talent, and how whatever Woody wants, Woody gets.

People always ask me about my relationship will Woody Allen, and of course it is very special. I had seen his movies and I wanted him to make movies for us at UA, so I called Sam Cohn who was his agent, and I said, “Let’s get together and let’s talk about an arrangement.” He said, “Great.”

So, I met Woody. We hit it off right away, and United Artists, through me, made a six-picture deal with Woody Allen. The terms were unique: all he had to do was tell me the story in outline and if I said okay, he would just go off and make it.

So, Sam calls and says, “Woody’s ready, he’s got his first idea.” And I said, “Great. This is exciting.” He says, “Okay, well here it is.” He said, “It’s about a musician with a cocaine problem.” And I said, “Woody, it’s approved – for the sixth picture in the deal. I want a comedy, okay? Something funny, please.” “Okay, I’ll get back to you.”

Two days go by; Sam calls and says, “Okay, Woody’s got a comedy. The title is “Bananas.” I said, “It’s approved.” And Woody went off and made “Bananas.”

Woody made some pictures for us and, as was his want, he occasionally asked non-professionals to consider playing a role. His casting person was the fabulous Juliet Taylor, and Juliet said, “Woody would like you to come in and read for him, and the film is entitled ‘Crimes and Misdemeanors’.” And I said, “What? That’s crazy.”

She says, “Will you do it? The worst case is you get it, the second worst is you don’t get it. What difference does it make?”

I do what Woody asks. 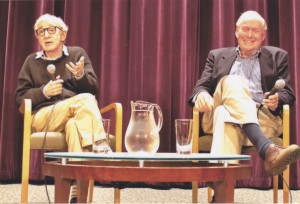 The next thing is I get a call from Juliet and she says, “You’re in the movie. We’ll pick you up at 7am. Do you mind riding with some of the other actors?” I get picked up, and Martin Landau is in the limo with me. Now Martin Landau is a serious actor. It’s Martin Landau and David Picker in the actors’ limo going out to the location.

Okay, so I get there and the AD comes up and says, “David, it doesn’t look as if you’ll be shooting until after lunch.” So now, I have lunch at the actors’ table and I knew most of the crew. I knew pretty much everybody, and everybody was laughing their heads off. I mean, “What is this guy doing here?”

In the film, it’s the opening scene of the film where I’m some distinguished person and I’m introducing these fabulous guests. So, you know, I make my speech, and everybody says it’s great, and life goes on.

A few months go by, and I’m in Toronto shooting a film. Juliet Taylor calls and says, “Woody has to reshoot the scene.” I said, “What do you mean? I screwed it up?” She says, “No, it’s not you. He’s famous for reshooting scenes. He wants to make an adjustment.” I said, “But I can’t do it.”

I was producing a movie and I felt I couldn’t take a couple of days off. So they shoot it without me. And I see the movie, and I see Bill Bernstein who used to work for me who’s playing my role.

And I send Woody a note, and I said, “Woody, I saw the movie. I loved it.” I said, “I have one critique. I really think in the opening scene of the movie, the actor who is playing the emcee wasn’t up to your usual standard of excellence, but the rest of the movie, it was really great.”

And I get a letter back from him. He says, “Dear David, thanks for the letter. I really appreciate it. I actually agree with you. I was not happy with it. Unfortunately, the actor I wanted to use was in Europe having a sex change operation. Love, Woody.”