Gabriela Cowperthwaite’s new documentary “Blackfish” is a gripping look at killer whales in captivity at marine parks like SeaWorld,  focusing on a single orca named Tilikum who has killed three humans.  The film provoked SeaWorld to issue, to top movie critics, an unprecedented rebuttal of the film’s arguments… and it provoked Rico to talk to Cowperthwaite about the issues she raises.

Rico Gagliano: And now, time for Chattering Class. This is when we are schooled by an expert and some fascinating topic. The topic this week, we warn you, can be upsetting at times, but it is definitely worth talking about: killer whales and their captivity in amusement parks likes SeaWorld. And our our teacher is Gabriela Cowperthwaite. Her new movie made quite an impact at Sundance. It is called “Blackfish,” and it explores the issue in the wake of the tragedy in which a Sea World trainer was killed by a whale. And Gabriela, welcome.

Gabriela Cowperthwaite: Thank you for having me.

Rico Gagliano: I kind of want to start with the really fascinating trivia about these animals. When you were researching killer whales, what was the most interesting thing that kind of leapt out at you?

Gabriela Cowperthwaite: Oh wow, there were so many things. I think the first one was the brain. They did an MRI scan basically, and looked at a killer whale brain. They have everything that we have in our brain, but then they have a part that we don’t have. We’ve never seen it before.

Rico Gagliano: And they, in the movie, the inference that is made is that they seem to almost have more highly-developed emotions?

Gabriela Cowperthwaite: Right, it’s located in a place where it kind of suggests that it contributes to the emotional life somehow. We can’t really know — we can’t kind of put it into terms that make sense to us. But a lot of people say that that’s why maybe they act in unison a lot. 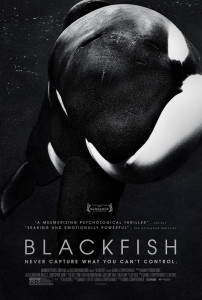 Rico Gagliano: They’re very social creatures, and then you show… there’s footage of three whales overturning an ice flow on which is a seal that they want to eat.

Rico Gagliano: And they do it… it’s almost like they have been trained, but it’s in the wild.

Rico Gagliano: Where did they get the name “killer whales?” One guy in the film says that there’s never been a recorded instance of a whale killing anybody in the wild.

Gabriela Cowperthwaite: That’s right.  It’s actually, everyone thinks it’s because they’re whales that are killers. They’re not whales, they’re actually large dolphins. “Killer whales” came from the fact that they actually kill whales.  And eat them.

Rico Gagliano: An unfortunate name for a fairly gentle creature.

Gabriela Cowperthwaite: Fairly gentle, but you know, that also is the side that we like.  You know, that’s convenient, I think, for us to remember:  that you know, they’re emotional and they’re lovely, and they sort of reach out and bond. But of course, they are the top, top predator out there. They take down great white sharks. They are killers. I mean, they’re predators. Both of those kind of need to be brought into, I think, the way we imagine these animals.

Rico Gagliano: Well, let’s talk about the film. You actually focus on one specific whale named Tilikum. And, you kind of follow this one whale’s life from the ’70’s, I believe, up until the moment where Tilikum killed this trainer.

Gabriela Cowperthwaite: You know, when I read the news stories about it… you know, I’m a mom who took her kids to Sea World. So when I was, you know, thinking that I was gonna make this documentary, I was terrified of him. I didn’t really have empathy.  I feel sort of bad saying that, but I didn’t — I was terrified of him. And so I sort of felt in order for me to make sense of him, I had to go back to his capture and just kind of follow through maybe what he might’ve gone through.

Rico Gagliano: And the narrative is basically that this was an animal that was kind of mistreated. And may have been made into a bad guy by us.

Rico Gagliano: So, you make that argument — that captivity damages these whales and makes them unsafe to work with  — but SeaWorld is conspicuously absent from this. You’ve tried to get them to be part of the movie, and they would not be.

As a journalist, without that opposing point of view, I kind of raise the bar as far as the burden of proof on you. I’m wondering, how you made the decision to proceed with making the film despite that?

Gabriela Cowperthwaite: I was incredibly disappointed. It was about a six month period where I was trying to get them to be interviewed, and I thought I had a chance.  Because maybe I’m naive. But you know, I thought just being someone who has no history of sort of animal activism — none of my films really reflect that point of view at all — I thought had a chance.

But to be perfectly honest, when I started peeling back the onion, what I was learning… I guess I could see why they wouldn’t. It would immediately put them on the defensive. I understood that, and also knew that, look, they’ve had the floor for 40 years.  They’ve kind of controlled the messaging. They’re in the media a lot. They’ve gotten their words out there. I felt sort of okay, finally.

Rico Gagliano: Well to play devil’s advocate and probably to ask the question that I think folks who haven’t seen the movie would ask: horrible tragedy, but Sea World’s been around for decades and decades and decades — How many deaths have there actually been? Doesn’t that actually show that they’re doing something right, safety-wise?

Gabriela Cowperthwaite: Yeah, no, it’s a good question, because you have to think about well, there have only been four deaths, you know, related to killer whales in marine parks. But, once you see the close calls, the injuries, people who were injured and sort of took leave, you start thinking about this whole thing differently.  Like, isn’t this an accident waiting to happen?

Furthermore, I think, you know, when you look at the consequences of these deaths to those families, and that these are… you know, I hate to say this part but this was not… these were not short deaths, you know? These were prolonged and fairly torturous. So when the consequences are sort of that bad, the probability in and of itself becomes kind of irrelevant.

Rico Gagliano: It’s interesting though, because you mentioned earlier you’re not a longtime animal activist. What drew you to this as a topic?

Gabriela Cowperthwaite: Yeah, I just was sort of obsessed by this story.  Because in my mind I thought killer whales were our friends. Like I thought we’re sort of in tandem here in life, you know? And that we realize that they’re our friends – and they’re capable…

Gabriela Cowperthwaite: — That’s right. We know they’re capable of doing this, but they choose us over the great white shark, you know what I mean? For whatever reason I thought we would never come to harm.

Rico Gagliano: I’m assuming, by the way, during the making of the film that you actually had close interactions with killer whales. What do you remember taking away from those interactions?

Gabriela Cowperthwaite: They are massive. Uh… It’s weird because I was used to maybe my Sea World experiences, in that the whale comes up to the glass sometimes, maybe might take note of you a little bit. So in the wild you almost want that to happen. Like, “Wait, I’m here!  I love you!” You know, “You’re so cool!” And they’re just kind of… they just kind of swim by.