“Funny or Die’s Billy on the Street” (airing Wednesdays on Fuse) puts comedian Billy Eichner on the – yes – streets of New York City with a camera, a stack of dollar bills, and often a celebrity guest, accosting unsuspecting passers-by and drafting them into a spontaneous, largely subjective, game show. He spends a lot of time yelling and thrusting a microphone at strangers, which we figure is pretty polite by New York standards — making him just the guy to answer our listeners’ etiquette questions.

Brendan Francis Newnam: So, that’s the basic idea: You run around like a maniac accosting people.

Billy Eichner: That is accurate.

Brendan Francis Newnam: Where did this idea come from?

Billy Eichner: Oh man… I was making these videos as part of my live sketch standup shows in New York years ago, where I would take on this persona that was really irrationally passionate about celebrity and had intense opinions about celebrity. The original idea in my head was: it’s one thing to stand on stage and rant and rave about pop culture. A lot of people do that.  A lot of comedians do that now. But what if you take it outside and shove it in a real person’s face as if it’s something that everyone should be thinking about?

So this person’s just going about their day — they’re going to pick up their kids, they’re on their way to work, you know… and it’s in New York obviously, so there’s a certain pace on the street.  New Yorkers don’t give a crap about anything but what they have to do that day, and everyone has really busy lives, and in the middle of it I stop you and ask you, “Did Jennifer Hudson peak too soon?” Because to me that’s very important.

Rico Gagliano: Speaking of confronting people on the street, overall have you been pleasantly surprised or disappointed in how people respond to you?

Billy Eichner: Always surprised. It has been a testament to not judging a book by its cover honestly. It’s a cliche, but it’s so true.

I really do pick people at random; I don’t know who I’m going to talk to.  And the reason I do that is because I have found when you sort of spot someone, you know, coming my way, and I think to myself “Oh that person looks funny or wacky?” Ninety-nine percent of the time they’ve got nothing.  They’re just boring, and this sort of wacky look is probably there because they have nothing actually interesting going on.

Rico Gagliano: Yeah, all the energy they have went into their clothes.

Billy Eichner: Went into their weird hat or their strange long beard.  And then you see some older lady on the street and you’d think “Well this person’s never going to know about Katy Perry or whatever I’m asking about.”  But then sure enough they saw her on The View, or they saw her on The Today Show, and they have a lot of opinions!  And — more importantly for me — the time to stand there and talk to me about it! What I have found in New York is that there are a lot of people walking around waiting for someone to talk to them.

Rico Gagliano: Do you have an example of maybe the most surprised you ever were with somebody? 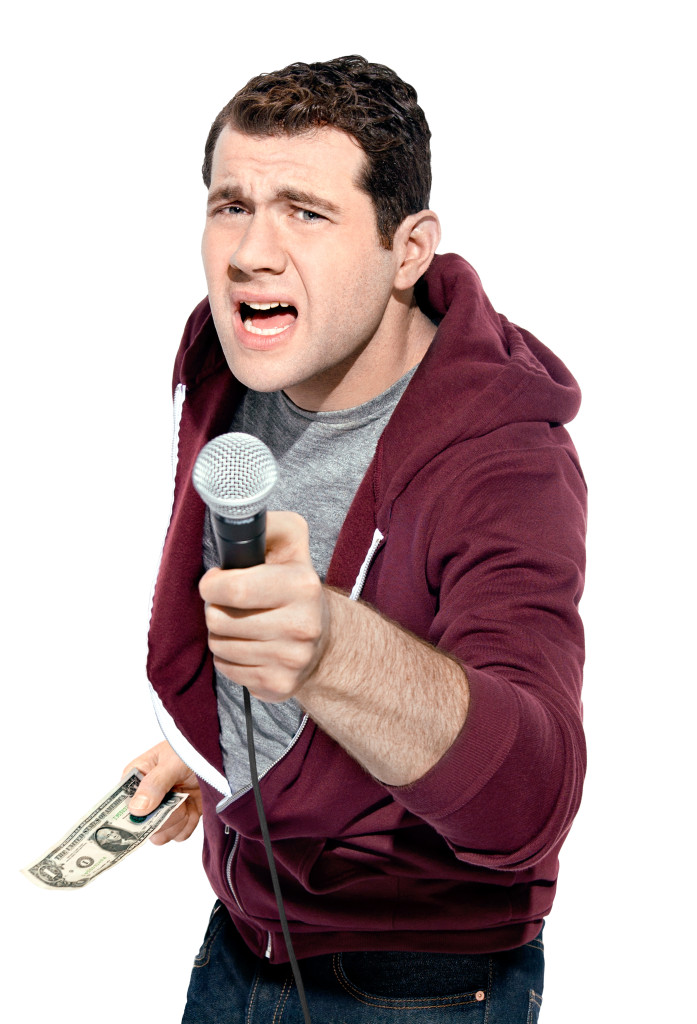 Billy Eichner: Yeah — There was a man the first season of the show, this semi-toothless… I don’t know if he was homeless, but he certainly wasn’t overly employed, I would say… and I asked him “Who do you like better: Meryl Streep or Glenn Close?”  ‘Cause I have this ongoing Meryl Streep obsession on my show.  And he was so, like, vehemently supportive of Glenn Close.  And we get into a huge argument about it and he’s just yelling “Glenn Close! It’s Glenn Close, dude! Glenn Close, dude!” You think there’s no way it isn’t scripted, but I swear you could not write it, you know?

Rico Gagliano: All right, Billy, we have a question: Will you answer our listeners etiquette questions?

Billy Eichner: I will answer anything.

Rico Gagliano: For a dollar?

Brendan Francis Newnam: But you have to donate the dollar back to public radio.

Billy Eichner: OK.  You know what? You guys are doing fine.

Billy Eichner: Oh don’t get me started. I shoot outside for a reason.

Rico Gagliano: All right, this is a question from Chris in North Carolina. And Chris writes:

“My friend borrows money from me often. Not a lot at once, just pocket change when he doesn’t have cash.  But it’s a fairly one way street and he doesn’t exactly jump on repaying me. Any fun ideas about how to call him out, or settle the balance?”

Billy Eichner: Yeah:  You tell him “You owe me a lot of fucking money,” that’s what you tell him!

I mean… no, no. I would say, “Look, I don’t have a ton of money myself, I can’t keep lending you money.” You have to be honest, you know?

Rico Gagliano: “If you don’t give me the money back, I can’t continue lending it to you.”

Billy Eichner: Exactly. “You never pay me back. It’s a little change here and there. It all adds up, you know. I need my money. Go get a job — babysit!”

Brendan Francis Newnam: But Chris asked if you had any fun ideas.

Billy Eichner: I gave you a fun idea! I said look him dead in the eye and say “Stop taking all my fucking money!”

Billy Eichner: I’ve made a career out of it!

Brendan Francis Newnam: You know, we have the Posts — Emily Post’s great grand children — come by giving certain etiquette advice… but I like your direct approach to etiquette. I think we’re going to get along.

Rico Gagliano: Yeah; I can almost predict the rest of your answers though.

Billy Eichner: Don’t judge a book by its fucking cover!

Brendan Francis Newnam: All right, so this next question comes from Scott in L.A. Scott writes, “I’m a video editor –”

Rico Gagliano: Can you believe it?

Billy Eichner: What a nice change of pace!  Keep going.

Brendan Francis Newnam: “Knowing video formats and sizes is what I’m paid to do. Sometimes when I go to my friend’s homes I notice their TVs aren’t set up correctly.  The image is scaled oddly, or they’re watching SD channels when I know an HD version is available –”

Billy Eichner: What a laid back dude. Scott’s his name? We’re shocked his name is Scott, by the way.  Keep going.

Brendan Francis Newnam: “What is the proper etiquette for offering to fix their setup, or at least suggest they’re doing it wrong? I don’t want to be obnoxious and over-reach.”

Rico Gagliano: See, he knows on some level that it’s a little obnoxious.

Billy Eichner: The proper etiquette is… get a life, is the proper etiquette! I’m so sick of people complaining, “Ohhh, it’s not in HD!” Who are you?! There are homeless people outside! Homeless people who love Glenn Close — and they don’t have HD or SD! They don’t have anything! They barely have a little… in my day I had a portable compact disc player — that was the only form of entertainment I had! So stop being so judgmental about people’s entertainment!

Billy Eichner: She always looks great, she hasn’t aged a day since “Kramer vs. Kramer!”

Billy Eichner: Scott. If Scott came to my house and said “Oooohh, can we watch a show in HD?” No! No you can’t!

Rico Gagliano: But isn’t it a simple way to make someone’s life better? “Look: with the touch of a button, I can make this more pleasing to the eye.”

Brian Eichner: Get out of here! Come on!  You come over to my house… by the way, you’re going to go to someone’s house and sit there and watch TV? Who are you, my uncle Lester?!

Rico Gagliano: Scott, I just want you to know I would defend you more, but I’m a little afraid to do so right now.

Brian Eichner: How boring!!! Play a board game! Talk for five minutes — you’re on your damn phone all day long, and then you’re gonna, “Oh yeah, let’s just throw all caution to the wind and watch some television!!“

Brendan Francis Newnam: And he’s a video editor! So he’s already doing that at work. Get some exercise.

Billy Eichner: I’m sure Scott’s a real looker, by the way.

Brendan Francis Newnam: So that’s the polite way to deal with things — there you go Scott!

Brendan Francis Newnam: Well, give us a cut, okay?

Billy Eichner: Yeah, I know — you guys always want every cent you can get, here.

Rico Gagliano: We’ve got it on tape.

Billy Eichner: Somehow Terry Gross doesn’t need my nickels and dimes. You know what I mean?

Don’t Call Me, I Won’t Call You

Rico Gagliano: This is something from Trying To Be Gentle.  It comes via our website – they don’t even what to tell us where they’re from.

“What do I say,” Trying To Be Gentle asks, “When someone asks me for my phone number… and I’m not interesting in giving it to them?”

Billy Eichner: I’ll answer that one honestly, since I’ve been giving your viewers a hard time so far.

I think in that case, you know what I say actually? I say, “You know what? Let me just give you my email.  Because it’s quicker, I’m on email all day long, and honestly you’ll get a quicker response out of me via email.”

Brendan Francis Newnam: So you lie to them, is what you’re saying?

Brendan Francis Newnam: I like how you had a nicer tone of voice, but your core answer was still “lie to them.”

Billy Eichner: Well I’ll be honest, I miss Scott. I do.

Rico Gagliano: Billy Eichner, thank you so much for telling our audience how to behave.

Billy Eichner: Thank you, it was fun. Thanks for having me.