From his debut, “Bottle Rocket,” through break-out hits “The Fantastic Mr. Fox” and “Moonrise Kingdom,” Wes Anderson has crafted an utterly distinct style.  Some of his trademarks: a core troupe of actors and collaborators, a visual experience of rich textures and intricate detail, and a sensibility that’s both whimsical… and melancholic.  His newest film, “The Grand Budapest Hotel” is no exception — it’s a headlong dive into pre-War eastern Europe, for a tale that’s part coming-of-age, part madcap caper.

Wes chats with Brendan about the pains of pride, fantastical filmmaking, and old-world stoves.

Brendan Francis Newnam: What are you most proud of in this film?

Wes Anderson: Well, you know… You’ve just hit a nerve. I just had this conversation yesterday with a friend, where I said “I don’t believe in pride.” I’m not sure if it’s really true, but I’m trying to make this case that I feel like pride is a negative quality.  But I guess to be proud of other people is a good thing? I don’t know; I love our cast.

Brendan Francis Newnam: That’s fair. Pride is a sin, so it might’ve been bad for me to ask that question off the bat.

Wes Anderson: Yeah. I mean, you know… I’m just trying this out.

Brendan Francis Newnam: Let me ask you this way: there’s a distinct ‘Wes Anderson style’ of beautifully rendered sets, attention to detail, certain camera movements. What is your favorite ‘Wes Anderson move’? What gives you delight every time you do it in one of your films?

Wes Anderson: Every time I’m making a movie I think I am doing something totally different from anything I’ve ever done before, and I’m back to square one and I want to try to make a new experience for everybody. Then, when the movie is done, a lot of people say “It reminds me a lot of everything else you’ve ever done!”  But I’m not really thinking about that when I’m making a movie. I don’t want to do anything to make it like what I’ve done before. Sometimes I might be aware that “I am now going to use a technique that I have used a number of times.” But I’m only doing it because I can’t think of a better way to do it.

Brendan Francis Newnam: You’ve said part of the inspiration for the movie — part of the inspiration for the protagonist, Gustave H, played by Ralph Fiennes — is a friend of yours. A guy who is kind of dapper, fastidious, and he carries himself in an old-world way. When I think about that, that’s how a lot of people think about you.  And I’m wondering if you see yourself at all in Gustave H.

Wes Anderson: No, I see our friend. He’s a sort of person who was fully formed when he was sixteen years old. Now he’s in his mid-50s, and if we had a conversation when he was sixteen, it would probably be very similar. He is someone who is very knowledgeable in the things he’s interested in, which is a very wide range of things. He sort of assumes the role of mentor. Most people when they enter into conversations with him quickly became a protege.

Brendan Francis Newnam: The name of the movie comes from the hotel, the fictional Grand Budapest Hotel, which is based on those grand old European hotels and spa resorts from the late 19th century. And you also show the hotel later, after communism, in the ’60s — and it’s drab and utilitarian.  That could be a metaphor for how you approach movies. Do you see your stuff as the former hotel, and maybe more naturalistic films as the latter?

Wes Anderson: I don’t, because I think the movies I make, they tend to have some sort of fantasy to them. There’s somehow some world where the story, the context of the story, the world that the characters live in… I like to do a thing where we invent that.

Somebody who makes a movie where they do want it to be like the reality outside — or the reality that you would discover whatever place it is — well, they have to use all the techniques at their disposal to do that. It’s not like you can just “make it real.” I’m absolutely equally interested in movies like that, and I think there’s no point that you cross between them at all. There’s just gradations.

Brendan Francis Newnam: Alright — we have two standard questions that we ask all of our guests. The first one is: what question are you tired of being asked?

Well, I think that’s quite rude to say! If you know that that’s not a nice thing to say, you wouldn’t say that in a real conversation with somebod, you know? Either I defend myself or I say, “Well I won’t defend myself.”

That’s the only thing that… there’s no pleasure in it.

Brendan Francis Newnam: The second thing we ask each of our guests: tell us something we don’t know. Something you haven’t talked about in interviews before. and this could be a personal fact or a piece of trivia. 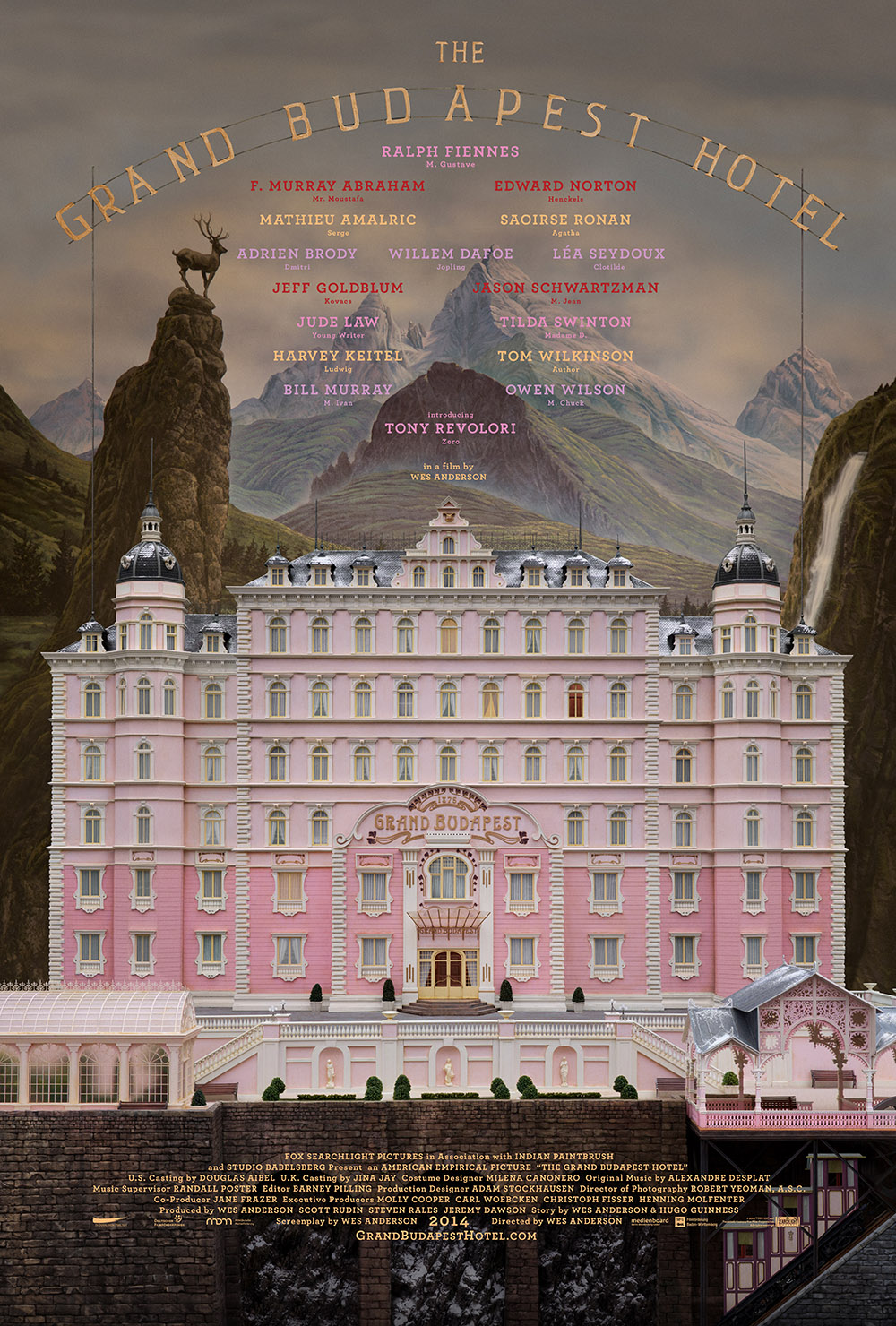 Wes Anderson: Well, one day someone will say “Can you tell us the most boring thing anyone ever said when you asked them this question?” And this could be it, but it’s what just sprung to mind.

We spent all this time travelling around in Eastern Europe and Central Europe. And we often went to locations that were abandoned buildings. You know, beautiful old buildings. Viennese kind of places. Old Belle Epoque kind of architecture that we could maybe do something in — we might adapt this building for our set.

And often when we would go into these buildings in that part of the world that had been behind the Iron Curtain, you would see the Communist layer of architecture. It would have been partitioned, and the ceilings were lowered, and these practically cardboard walls with orange and yellow flowered wallpaper, and weird linoleum…

And the one thing that always struck me in these places — always in the corner of these ruined rooms — there were these ceramic wood-burning stoves that go from the floor to the ceiling.  And they’re very intricate, they’d have wonderful detail… and they have been there since the beginning, because they’re so heavy that they can’t be stolen.

And I would always say, “Let’s take this stove and put it in the movie!” and they’d say “We can’t. We have to just make it scenically, because you really can’t move these.” But somehow these stoves stand in the corner like some sort of witness.

Brendan Francis Newnam: Did you incorporate stoves like that in the final film?

Wes Anderson: We’ve got ’em all over the place. Unfortunately ours are made of essentially papier-mache.  But they look more or less real.

Brendan Francis Newnam: Even an art-direction-obsessed Hollywood director like you was unable to dislodge these witnesses to history.

Wes Anderson: Exactly. Even with my own resources.  But if Chris Nolan wanted one, I bet they would give it to him. I’m operating on a different budget level.