Brendan Francis Newnam: So, I have to ask, how do you feel?

David Linden: I feel good. I know that I should.

Brendan Francis Newnam: Well, I’m glad that you feel good, but I guess maybe I should ask, how does one feel? Because this is the topic of your book.

David Linden: Yes, absolutely. So our sense of touch is actually many different highly specialized micro machines in our skin. Some for pain, some for itch, and heat and cold and pressure and vibration, in fine tactile form. And all these streams of information come through the nerves, into the spinal cord, and into the brain. And then, ultimately, they segregate into two fairly different systems. One is called the Sensory Discriminative System and it’s just all about the facts: Where on my body am I being touched, how intensely, and what is the nature of that touch? And then there is a second system which is the Emotional Touch System, and that’s the one that gives touch its particular emotional tone. It’s what makes a caress feel good and pain feel bad.

Brendan Francis Newnam: So if I understand correctly, when something happens to us, one system will feel the pain, but then another system will tell us “Ouch, that hurts”? 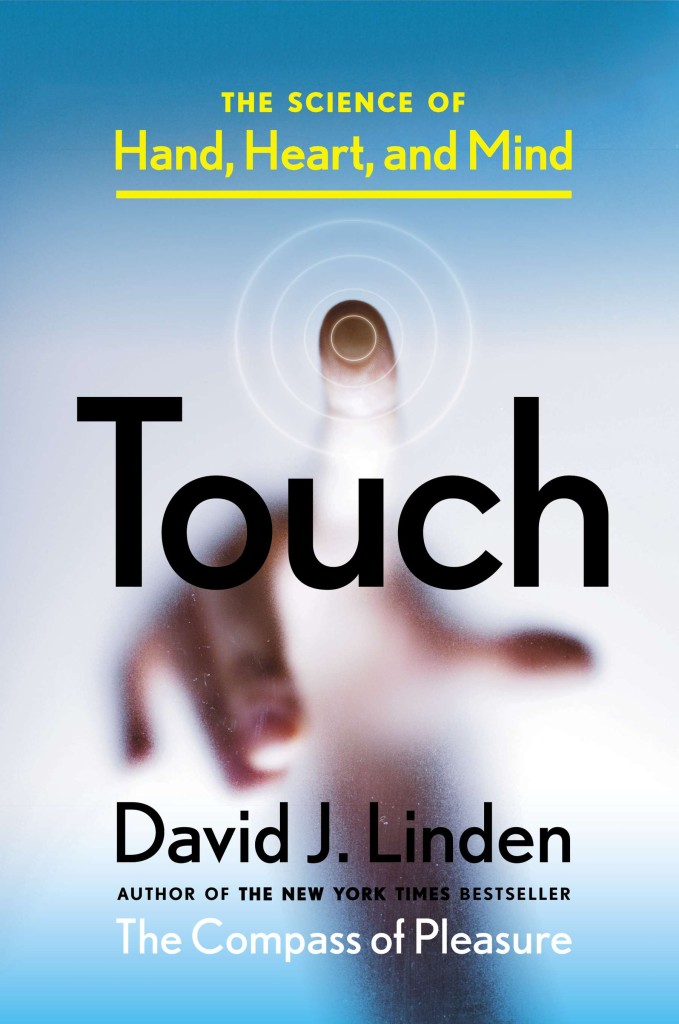 David Linden: Yes, that’s absolutely correct. When you feel pain, it feels like a unified sensation. You don’t feel it like there’s an emotional part, and then there is a discriminative part, and you can separate them. Pain feels intrinsically bad. But, if you sustain damage to your brain that destroys the emotional pain circuitry in a place called the posterior insula, then you will have a syndrome called pain asymbolia. And pain asymbolics have no emotional pain feeling at all. So, for example, if they whack their thumb with a hammer, instead of going “Owww, heck! Oh that hurts!” the way someone would normally, with a negative emotional reaction, they would just go “Yeah, that hurts. That hurts a lot. It’s throbbing now,” with a flat affect.

Brendan Francis Newnam: Do you feel like this sense gets less attention than the sense of sight or the sense of hearing?

David Linden: Yeah, I think people take it for granted. And I think part of the reason is because it’s always on. You can close your eyes and imagine being blind if you’re sighted, you can plug your ears, you can pinch your nose shut, but there’s no way to turn off your touch sense through some act of will. And as a consequence, we just think of it as always being there. But it’s absolutely profound and central to our human experience.

Brendan Francis Newnam: And what’s neat about your book is, when people do begin to think about touch, we think about “Oh, this would be something that would be hot,” or we think about pain. But what you tell us is touch also does many other things, like it shapes our first impressions. Can you explain that?

David Linden: Yes, so one of the first things when we meet someone and we want to form an impression of them rapidly, as we are very good at doing, as humans have evolved in social groups. The first things we want to determine is “Is this person warm or cold? Are they friend or foe? Should I trust them? Or do I need to be wary of them?” And that really is the hot-cold dimension. And what was shown in an interesting experiment is, if you have someone hold a hot cup of drink versus a cold cup of drink, immediately before they are reading a job résumé, if they are holding the hot drink they rate the person as warmer, more sociable, more cooperative, more trustworthy, than if they were holding the cold drink. It’s not that you’re just rated better in every way, those people aren’t rated as more serious or more intelligent, they’re just rated as warmer.

Brendan Francis Newnam: Wasn’t there another study where someone had a clipboard, and if the clipboard was heavier, the person was thought of as more serious and had more gravitas?

Brendan Francis Newnam: This is why I gave you a strong, handsome, charming glass of water when you arrived in the studio today.

David Linden: Yes, yes. That was a good move.

Brendan Francis Newnam: Thank you. So as much as we are learning about touch, it comes as a surprise to learn that we still don’t really understand — it’s not how sex works — but how the genitalia relate to touch. I find that hard to believe.

David Linden: So, people can have sexual contact through all kinds of parts of their bodies, and people can have an orgasm all kinds of different ways not involving the genitalia, but there’s something special about the genitals. These places produce the strongest, most reliable sexual sensations. And so you might think, alright, “Well what happens if I look under a microscope at the structure of the skin in those locations? Would I see something unusual?” And the answer is that it’s not obvious. There is one kind of nerve ending there that has a great name, it’s called a mucocutaneous end organ. And it is likely to be the source of sexual sensation, but we don’t actually know for sure that this is true. When you think about it, sexual sensation of the genitals drives so much of our human behavior, and is so important in our human culture, and yet we don’t actually know what cell does it.

Brendan Francis Newnam: It seems like there would be no lack of volunteers to do this sort of research, so do you have any hope that we’re going to figure it out?

David Linden: Well, you know, the volunteers, it turns out, actually are mice.

David Linden: Right? Because you’ve gotta cut off the tissue. I don’t think you’re volunteering to put it on the block, right?

Brendan Francis Newnam: That’s right, no, that’s right. Maybe there’s some moyles you can work with who could help you.

David Linden: You know, I never thought of that, but that’s a strategy!

Brendan Francis Newnam: It’s like the moyles said, it won’t be long now until we discover how that works. OK, sorry. That was my boorish portion of our interview.

David Linden: Yes, I hear you got tipped off to that.