Much of modern comedy sprang from the absurdly influential humor magazine The National Lampoon. Ellin Stein has written about culture for publications from People magazine to the New York Times, and her new book is called That’s not Funny That’s Sick: The National Lampoon and the Comedy Insurgents who Captured the Mainstream.

Rico Gagliano: First of all, especially for the younger folks, they will know the National Lampoon mainly as a name they see above the title of the occasional comedy movie. For them, can you briefly just lay out what it was and the various comedy outlets it begat?

Ellin Stein: It was started way back in 1970 by two graduates who recently from Harvard and they had worked on The Harvard Lampoon and done some parities there. Part of it was very smart, very sharp, very subversive, and the more frat, sex and drugs, and rock and roll and gross out humor was always part of the mix but it was a much smaller part of the mix.

It always had sort of a Dr. Jekyll and Mr. Hyde split. Over time Mr. Hyde took over but what they begat was — well, Lorne Michaels would dispute this — but Saturday Night Live to some extent, the Judd Apatow movies, The Onion, South Park.

Rico Gagliano: They all owe a debt to the humor that was started at The Lampoon?

Ellin Stein: If they weren’t directly in line they were influenced, yes.

Rico Gagliano: At the time, there were other national humor magazines. What was it about the Lampoon style of humor that made the magazine popular as opposed to the others?

But what The Lampoon did was that it had that sex, drugs, and rock and roll element. It had better production values, better paper, and after the first six months better art direction. It had naked ladies in the form of the photo funnies, which was a photo novella with usually a half-naked lady in most of them. 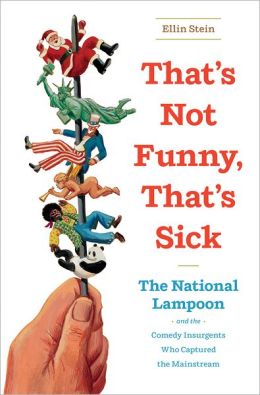 Rico Gagliano: So much for highbrow.

Ellin Stein: It was more populist I guess.

Rico Gagliano: It was the blend of the high and the ultimate lowbrow but being ironic about how lowbrow they were being I guess.

Ellin Stein: Exactly. We’re sort of mocking this but at the same time we’ll take the commercial benefits of it. They’re trying to have their cake and eat it too.

Rico Gagliano: Absolutely and they ate a lot of cake. As a radio guy I would be remiss not to mention The Lampoon actually had a national radio show for awhile in the ’70s and it featured everyone from Christopher Guest to Bill Murray. Do you have a favorite sketch first of all from the radio show?

Ellin Stein: Yes. There’s a great one where Christopher Guest  does culture show actually and he introduces it with excruciating correctness. After this highly erudite introduction Bill Murray comes on and just shouts about a vengeful, escaped lobster. I’m fairly lowbrow myself but I find that very funny.

Rico Gagliano: I agree. My favorite tale about the radio show from your book is how they handled switching from an hour long show to a half hour.

Ellin Stein: Yes, that’s very funny. The radio hour was, for commercial reasons, cut back from an hour to a half hour but they didn’t tell the audience this. They just made it sound like they were being cut off.

Rico Gagliano: It’s genius. There would be basically an actor saying something and they would just stop the show mid-sentence.

Ellin Stein: Then they said “we’ve been forced to cut it short. Write in and protest.”

Rico Gagliano: In the late 70s the movie National Lampoon’s Animal House comes out. It is made for no money. Universal Studios doubts anyone will respond to it. What happens?

Ellin Stein: Animal House did extremely well. It spawned toga parties. John Belushi in a toga made the cover of Time magazine.

One of the executives it says in the book that “people kept turning up. We weren’t doing all that much PR and the word spread. We don’t know how.”

In the days before the internet it went viral by people speaking to each other on the phone or something.It spawned a whole genre of film that is still with us today for better or worse.

Rico Gagliano: How did it change it? It basically changes the nature of all teen movie comedies that follow, right? What was new about it?

Ellin Stein: Well, it went in for bad taste jokes in a way that had never been done before. Again, and you see these two dynamics I mentioned really being played out, compared to the things that came after it and imitated it it looks like Wes Anderson or something.

Ellin Stein: Yeah, because it had also a lot of very smart jokes as well. It was about anarchy I think as opposed to trying to gross people out for it’s own sake. Some of the people at the Lampoon, indeed some of the writers, felt they didn’t think it was as smart as they would have wanted it to be.

Rico Gagliano: Along these lines, I think it’s safe to say that nowadays The Lampoon brand is overshadowed by Saturday Night Live which sort of grew out of it and by The Onion and other humor outlets.

Ellin Stein: Yes. South Park I think when we’re talking about pushing the boundaries of taste, we have to mention South Park.

Rico Gagliano: Certainly. So, what happened? What triggered it’s decline?

Ellin Stein: Well, the initial audience got older, the initial writers got older, and started drifting away. The publisher of the Lampoon had a lot more sway and was able to call the shots a lot more and he wanted more naked ladies on the cover.

They just didn’t attract the talent. It was just like you get some music scenes sometimes where all these great bands come at one place at the same time. It was kind of like that and sort of like a baseball team with a real winning streak and then it dissipates.