LoveGrain is a new company working to export teff — Ethiopia’s staple  grain — to the US. The idea is to support Ethiopian farmers by selling Americans a gluten-free teff-based pancake mix.  The company just won an Agricultural Innovation Prize for the idea.  So over a plate of flapjacks, we asked the co-founders to tell us about the stuff.

Aleem Ahmed: So, teff is an ancient grain from Ethiopia that’s been grown there for over 5,000 years. It’s the tiniest grain in the world. It has a subtle, nutty flavor. It’s grown by over six million farming households in Ethiopia.

Rico Gagliano: I wanted to ask you about the “tiniest grain” thing. First of all, who’s going around measuring all grains? That sounds like a really bad part time job.

Aleem Ahmed: You know, I think it’s seed scientists whose job it is to do that.

Rico Gagliano: I would hope so!  By tiny, how tiny are we talking? I mean, lesser than even, say, couscous or something?

Caroline Mauldin: So tiny that it would actually fall through a sifter.

Rico Gagliano: So really, really fine. Does its size give it any special properties?

Aleem Ahmed: Yes, it does. You’ll notice that it’s high in fiber, and that’s because it’s the tiniest grain in the world, so the ratio of the outside of the grain to the inside is the highest ratio.

Rico Gagliano: I see: and the outside is kinda where the fiber lives on a grain, and there’s a lot of outside to this grain, so it has a lot of fiber.

Rico Gagliano: Well, why are we only now starting to talk about that in this country, then?

Aleem Ahmed: It’s really because folks haven’t connected the dots. Ethiopia’s sort of been off the international food scene for a while. You know, it was a country that used to be closed off to the world, but is now growing and is vibrant.

Caroline Mauldin: Delicious. And actually, most Americans who have eaten Ethiopian food will know teff as the basis for injera, which is sort of the spongy flatbread that Ethiopian food is served on.

Rico Gagliano: Sure, and it’s also used often to scoop up the kind of pasty Ethiopian food.

Caroline Mauldin: Indeed. Eating with your hands, my favorite way.

Rico Gagliano: I’m glad you bring that up, because that flatbread, when I’ve eaten it at Ethiopian restaurants, is kind of sour, it has a tang to it. Is that typical of anything made with teff?

Caroline Mauldin: It’s not, actually. The sourness is coming from the fermentation that, you know, typical sourdough bread would also go through. The teff itself has kind of — as Aleem mentioned — a sort of subtle nutty flavor, and really can lend itself to savory goods or to sweet goods. 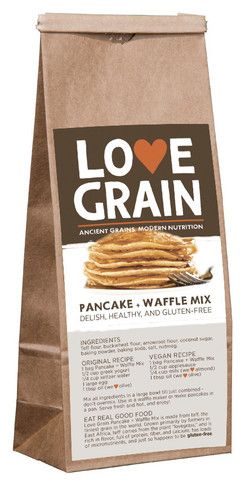 Rico Gagliano: So part of the goal of your company is to import teff from Ethiopia to sort of help the Ethiopian farmers. But how much teff is grown in the United States right now?

Aleem Ahmed: There are a couple places growing it in the U.S. When it was grown first, it was primarily grown for the straw and for the grass as cattle feed, and not really for the grain. I would say the primary teff that’s used for food products is coming from Idaho. A little bit is being imported right now.

Caroline Mauldin: But that would be mostly just for the Ethiopian diaspora. Most of the imports that we have today are going to places like D.C., where there’s a large amount of Ethiopians.

Rico Gagliano: I see, they want the real stuff from back home.

Rico Gagliano: Here’s the thing, though. If it becomes very popular, is there a risk that maybe, by popularizing this, we’re actually gonna make it more expensive, or cut down on supply?

Aleem Ahmed: Well, that’s a great question, but we’re actually getting out ahead of a projected surplus in Ethiopia of teff. When I used to work on agriculture projects in Ethiopia, we had found new ways of planting the grain, so that we were projecting teff surpluses down the line.  From the same plot of land, we were expecting, you know, twice as much teff.  And if there was excess teff in the country, the prices would begin to start dropping, which could actually end up hurting the farmers at the end of the day. So by finding export markets for this teff, we’re actually gonna create a floor so that the price can’t drop below a certain level for the farmers.

Rico Gagliano: Okay. I’m going to try some of this stuff. Our intrepid associate producer, Jackson Musker, along with our digital assistant Brittany Martin, cooked up a batch of pancakes with this mix that you have, made of teff.

They look like any other pancakes — maybe more like buckwheat pancakes — they have a darker sheen to them, I guess. I’m gonna try some plain — Jackson also provided some maple syrup, but I should note that it’s not real maple syrup. I feel like we haven’t trained you well, Jackson!

Rico Gagliano: This is the corn syrup-based stuff. So, I’m gonna try some of this, here we go.

Rico Gagliano: So it is actually sweeter than the typical pancake that I get, which actually needs a lot of syrup to give it some punch.

Can you use this for basically anything that requires some sort of flour? You know, corn flour, wheat flour, whatever, could you make tortillas out of this?

Caroline Mauldin: Muffins, scones, banana bread, the mix as it exists today can actually be used for any of those things. We are now in the process of developing a more general baking mix that, as you say, can be made into sort of tortillas, crackers, et cetera.

Aleem Ahmed: It’ll also keep you full longer, too. That’s one of the real benefits of fiber.

Rico Gagliano: Are you telling me that these pancakes could be diet food?

Caroline Mauldin: You got it.

Rico Gagliano: Could you make donuts out of this stuff?

Caroline Mauldin: I mean, why not?