Musician Stephen Malkmus is best-known for leading Pavement, a signature band of the 1990s-era indie rock scene. His collegiate look, cool demeanor, and literate, stream-of-consciousness lyrics made him a critical darling and fan favorite. Pavement disbanded in 2000. Since then, he has made six albums, solo work and with his band, The Jicks. The latest Jicks record is called “Wig Out at Jagbags.”

Brendan is just a bit of a fan of Malkmus, so it’s no surprise they had plenty to discuss. Hear the full tape of their interview.

Brendan Francis Newnam: Should we start with “Houston Hades”?

Stephen Malkmus: Yeah, that sounds good. That has a little anarchy at the start of it and then it settles into a populist groove.

Brendan Francis Newnam: I have a question about the end of the song. That part? How does that part of a song evolve? Because it doesn’t, I don’t see someone sitting on their couch adding that ender. Is that something that happens in practice?

Stephen Malkmus: Yeah. It just happened. A cherry on top at the end. I was trying to sing a little like Robert Smith, like imagine if Robert Smith from The Cure was in the Rolling Stones or something. But he’s singing about tear-away jerseys. I imagine Texas Longhorns in the 70s with tear-away jerseys and stuff.

Brendan Francis Newnam: What a window into your brain. Robert Smith and the Texas Longhorns.

Stephen Malkmus: Yeah. But you know that the Gothic stylings of Robert Smith were really popular with suburban Dallas teenagers in the 80s. So you never know.

Brendan Francis Newnam: Who is your ideal audience for this album? 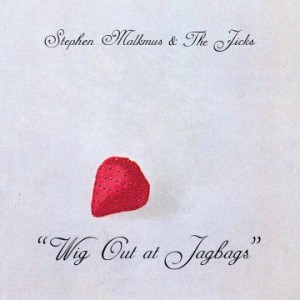 Stephen Malkmus: The audience sort of picks itself. We just want any audience. Obviously, not date rapers or fascists.

Brendan Francis Newnam: You want good people to listen to your music?

Stephen Malkmus: Yeah. A mix of male, female. All demographics would be fine. Except those that I stipulated are not welcome.

Brendan Francis Newnam: But when you’re writing a song does that help focus your mind sometimes to who the audience is? Or is that just not even part of the equation?

Stephen Malkmus: I don’t know. I just want things to be catchy in my mind and attainable with my levels of talent. So I try to keep grounded that way.

Brendan Francis Newnam: You have two daughters now. And I’ve read in several interviews you talk about their love of pop like Lorde, Lady Gaga. You said that Daft Punk was getting a lot of play in your house recently. Do you ever think about writing a song like that? Just like a pure, radio friendly…

Stephen Malkmus: I take influence from those people occasionally. In my lyrics I’ll throw in something universal or written with an eye towards not what I really think but what the song would trigger in people.

Brendan Francis Newnam: Can you give me an example of that?

Stephen Malkmus: Well there is “We Grew Up Listening to the Music from the Best Decade Ever.” It just kind of, I can see Katy Perry writing this. Kind of like “Teenage Dream.” But I’m having good success with this low stakes, personal thing that we’re doing. And I like that.

Brendan Francis Newnam: When was the moment you realized that you were going to be a musician your whole life?

Stephen Malkmus: Well I think when we made a record in Pavement called “Slanted and Enchanted” and then “Crooked Rain” was the second one. And those made me feel pretty confident that I could at least exist in a level that I was used to which was, I don’t know. Like Maxwell’s, perhaps you know, there was a venue in Hoboken, New Jersey that was kind of like a small club and those were my aspirations, to be able to play there. And I was pretty sure I was gonna be able to play Maxwell’s for like eight years.

Brendan Francis Newnam: What was your plan gonna be after that eight years?

Stephen Malkmus: Maybe we would graduate to Irving Plaza or something but if it didn’t happen I would just reassess.

Brendan Francis Newnam: Well at the time you were a security guard at the Whitney Museum. And you were kind of a preppy group. I think you once described Pavement as nice suburban kids. How did your parents feel about your career choice?

Stephen Malkmus: Well I went to university. They payed for it. So that was maybe something that I was supposed to parlay into a middle class life like theirs. And I’m sure they wouldn’t have thought of music as making that happen. I mean we were from Los Angeles so there’s a lot of entertainment people, but we were on the Ronald Reagan side of the street. Even though he was an entertainer, he was more of an Orange County Republican. That was the archetype. Not the Jack Nicholson or Steve McQueen or something.

Brendan Francis Newnam: All right, well we have two standard questions we ask our guests, be they Reaganites or Nicholsonites, and the first one is: what question are you tired of being asked in interviews?

Stephen Malkmus: With music, people ask you, “What came first the words or the music?” And for 99% of us it’s always the music and it’s kind of obvious that, in music, that you need the music first.

Brendan Francis Newnam: So the words can actually fit in the song. All right so the second thing we ask of our guests is: tell us something we don’t know. And this can be either a personal thing that you haven’t shared in interviews before or it could be an interesting piece of trivia about the world.

Stephen Malkmus: This isn’t even gonna be particularly interesting but my daughter, one of her friends, her name’s Elena and her mom’s name’s Britta, and you don’t know that. [Britta] grew up in Lawrence, Kansas, and the first concert she went to was Mighty Mighty Bosstones and Skankin’ Pickle. I don’t think anyone knows that. And when I was looking at my notes on my iPhone, when I saw you were gonna ask that question, I had written Skankin’ Pickle. Just to remember that.

Brendan Francis Newnam: Certainly obscure fact. So your daughters are 10 and 7 so I imagine you talk to their friends parents a lot when you’re waiting to pick them up from school.

Brendan Francis Newnam: Do you find any of their friends parents are fans of your music?

Stephen Malkmus: A couple. Not really… I know there’s some Black Crowes fans.

Brendan Francis Newnam: The important thing is: do your kids know that they have a cool dad yet?

Stephen Malkmus: Oh, they know. Yeah, they think I’m a rock star. But they don’t know what that means exactly. They think anyone that plays in a band is a rock star which is good for your ego I suppose. Or you may feel hollow knowing that it’s not true.