British comedian, actor and writer Stephen Fry started out as half of the comedy duo “Fry and Laurie” (with Hugh Laurie), and has since starred in classic BBC comedies like “Black Adder” and “Jeeves and Wooster,” and movies like “Wilde” and “Sherlock Holmes: Game of Shadows.” He’s won an Emmy for his documentary work, hosted a quiz show, and even lent his voice to a half-dozen best-selling video games. On Twitter, he’s followed by over six million people eager for his wit, behind-the-scenes banter, and political opinion.

These days he’s onstage in his Broadway debut, reviving his role in a production of “Twelfth Night” that’s been gushed over by critics since it launched at Shakespeare’s Globe Theater late last year.  He talks to Brendan about suiting up as Malvolio, stoking one’s curiosity, and spending Turkey Day with Gore Vidal.

Brendan Francis Newnam: Your Twitter bio claims you are an “actor, writer and Prince of Swimwear.”

Stephen Fry: Yes, that about covers it; I can’t think of anything else I can do.

Brendan Francis Newnam: Is there really a Prince of Swimwear in England? I know there’s an Earl of Sandwich.

Stephen Fry: There’s no Prince of Swimwear and if there were I would come last! It’s ironic.

Brendan Francis Newnam: So in this rendition of “Twelfth Night,” you play Malvolio, the kind of straight-laced steward to the noblewoman Olivia. The New York Times gave it a great review, and they called your performance as Malvolio felicitous. It’s felicitous for your Broadway debut; that this is a great way for you to come to Broadway. 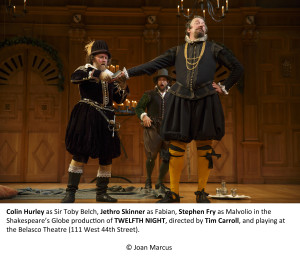 And I’m wondering, do you agree? Does Malvolio feel like the right fit for Stephen Fry?

Stephen Fry: Yes, I suppose so. It suits certain elements of me, if you like. There’s a gravitas in Malvolio, a pomposity!

Brendan Francis Newnam: You strike me as less puritanical.

Stephen Fry: Yes, I’m certainly not that. He is described as puritanical sometimes, and Maria says, “Oh, the devil he is puritanical. He’s anything — he’s anything that will please people.” So his puritanism is there simply, I think, because he wants to show himself as superior to the other servants.

Brendan Francis Newnam: You once said that you admired Shakespeare because, although he appeals to intellectuals, at heart he’s a cakes-and-ale guy, a populist.

Stephen Fry: Absolutely. Very much so. And I think a lot of the aristocrats and kings that he presented to the people… of course they admired them and were fascinated, because they thought they were getting a window into a world they would never other imagine.  I mean, simply the colors on stage!  You went back to Elizabethan England, the only colors ordinary people could afford were earth pigments, which were very dull indeed. Only the very rich could afford to have imported jewels and dyes that were fantastically expensive. Indigos and ultra-marines and aqua-marines. So it was a bit like going to a Busby Berkley Musical in the Depression — you were looking at the amazing life of amazing people.

But you were also getting a moral tale out of it. You could go away satisfied that you weren’t a prince or a king, because princes and kings have pretty rotten lives.

Brendan Francis Newnam: Malvolio has a famous line that he reads – it’s actually written by Maria who was playing a prank on him – where she says “Some are born great, some achieve greatness, and some have greatness thrust upon them.” Does that line apply to Stephen Fry the writer or actor?

Stephen Fry: Achieve is always the one! There’s the old joke of someone bumping into Vladimir Horowitz walking down Sixth Avenue, and they say, “How do I get to Carnegie Hall?” and he says, “Practice.”

But… I had great good fortune to be expelled from a large number of schools when I was a boy. Four or five at least couldn’t handle me. And I ended up in prison.  And at just the right time, I think, I decided that criminal life wasn’t for me.

Stephen Fry: Right, yes. I could have turned into James Spader  in “The Black List,” one likes to think — some arch master criminal — but instead I thought, “No I’ll go to a university.” 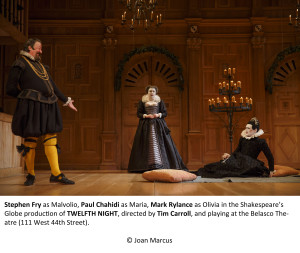 thought I would stay and grow tweed quietly in the corner writing about Shakespeare.

But instead I had the misfortune of meeting Emma Thompson and Hugh Laurie and Tilda Swinton and other such people, and we did comedy instead.

Brendan Francis Newnam: And you were quite a success with various projects on radio, on television, books. The phrase ‘Renaissance man’ comes up when people talk about you. You’re an actor, writer, game show host, et cetera…

My question, when I was looking over all of the things you’ve done, is just simply: how do you do it? Do you have extraordinary self discipline? Are you a great time manager?

Stephen Fry: I have a magnificent PA.

Brendan Francis Newnam: Which is a production assistant?

Stephen Fry: Personal assistant, really. And she looks after my diary. She’s the Martin Bormann of my diary, and keeps away things that would distract me.

But it’s ultimately curiosity that drives anybody. I’m always astonished when people say, “Oh, I haven’t got time to do this,” or “I haven’t got time to do that.” Time is absolutely and infinitely elastic! And they say, “Well try saying that to a mother with a child of two.” But I know mothers with a child of two who have simultaneously taught their child of two Russian, and taught themselves Russian. There’s plenty of things you can do.  And I think, possibly, the greatest human sin is lack of curiosity.

Brendan Francis Newnam: You did a documentary, “Stephen Fry: The Secret Life of a Manic Depressive” and you described yourself as ‘bi-polar light.’ Do you think that figures into why you do so many different projects?

Stephen Fry: I do. I think that, and atheism, which is the most optimistic of all belief systems that you can have.

Not that atheism is a belief system, but if you believe in a God and an afterlife then there’s not much point in worrying about this life. There’s not much to do. You’re gonna have an eternity, apparently. And the idea that this is sold as a good thing is, to me, absolutely incomprehensible! The idea that we have one life that we can enrich and fill and then it’s over — like a long, beautiful sleep, and you’re never conscious again — is fantastic.

To spend eternity even with what? Angels? Usually white crystal rooms with strange white things breathing on you and hideously tasteless music.

Brendan Francis Newnam: Don’t you get to meet Frank Sinatra or Noel Coward?

Brendan Francis Newnam: These people that have come before. Heaven could be amazing.

Stephen Fry: You meet them anyway! That’s what literature is, that’s what history is! I’ve met Shakespeare by being in the Shakespeare play, by reading his plays. To actually meet the man and spend my lifetime with him, I’d get to know, like, what his farts smell like? In the end, a life is enough!

Brendan Francis Newnam: Alright, well, we have two standard questions that help us get to know our guests while they’re still alive. And the first question is, “What question are you tired of being asked in interviews?”

Stephen Fry: Haha!  I suppose the question I get most bored with asking is… what am I gonna do next? Because I never know.

Stephen Fry: No. I mena, I know what I’m going to do next year, because that’s laid out, but they say “Is there any ambition, is there something you haven’t done, but you want to do. And I can’t think of it really. It may happen.

Stephen Fry: Immensely lucky. Yes, just the other month I went up the Dolomite Mountains in blizzard conditions, on the border of Italy and Austria, with Bear Grylls, and had to do the most terrifying physical things I’ve ever done. You feel very satisfied at the end of that.

Brendan Francis Newnam: OK, our second question is, tell us something we don’t know. It could be something about you that you haven’t discussed in interviews before… or it could be an interesting piece of trivia.

Stephen Fry: Well an interesting piece of trivia is one that I used to share and laugh about with my dear friend — and it’s a way of memorializing him, not that he’ll ever be forgotten — Gore Vidal.  Around this time of year, we always used to pore over history books, of which he had an astonishing collection.

And he would say, “It’s extraordinary isn’t it? This Thanksgiving, the ability of the Americans to mythologize themselves.” He said, “If you asked 90 percent of Americans what we were giving thanks for, it would be ‘escaping religious persecution.’ In fact, the exact reason the Puritans left Plymouth to go to America was in order to be free to persecute.  And until America understands that it will never understand itself.”

And I’m not saying this as a Britain who wishes to defend Britain, but: Puritans were not allowed to beat up Quakers. They weren’t allowed to set fire to Catholics.

Stephen Fry: In Britain, yeah. It was a place of religious tolerance. And if you read your Nathaniel Hawthorne, you’ll read terrible tales of Puritans hunting down, burning, savaging, torturing Quakers and other non-conformists of slightly different nuanced sects.

Brendan Francis Newnam: This is exactly what I think would happen at a Gore Vidal/Stephen Fry Thanksgiving dinner party.

Stephen Fry: Yes, I know!  It sounds cynical but it’s not, I promise you!