Back in 2012, tech entrepreneur Rob Rhinehart decided to stretch his food dollar — and simplify his life — by whipping up a cheap nutritional powder which, mixed with oils and water, he proceeded to live on for weeks. A subculture of folks started tweaking the recipe, and this spring, a commercial version became available for purchase online. Soylent is now one of the buzziest foodstuffs around, and over $3 million worth of it has been sold. This week, Soylent’s business VP, David Renteln, stopped by our studios with a sample … and to reassure those disturbed by the product’s sci-fi name.

David Renteln: Yes, so in the movie with Charlton Heston, Soylent is made of people.  But our product contains absolutely no people.

Rico Gagliano: Happy to hear it. Tell me what is in this stuff? What are the ingredients?

David Renteln: There are a lot of ingredients. The largest percentage is oat flour, maltodextrin, canola oil, rice protein.

Rico Gagliano: First of all, who came up with those particular ingredients in whatever proportions you have them in?

David Renteln: It took a lot of product iteration. Rob, our CEO, came up with the original formula and he lived on it for 30 days.  So that’s where this all began.

Rico Gagliano: Sure, but I mean, where did he come up with it? Did he just kind of test out every possible combination of nutritional supplement until he came up with one he could live off?

David Renteln: So there are a lot of studies that show what ideal nutrient proportions are. Part of what Rob did initially was sift through all these studies and come up with the closest consensus of what would be most healthy, which we then confirmed with our medical adviser, Dr. Pi-Sunyer, who is the head of human nutrition at Columbia. 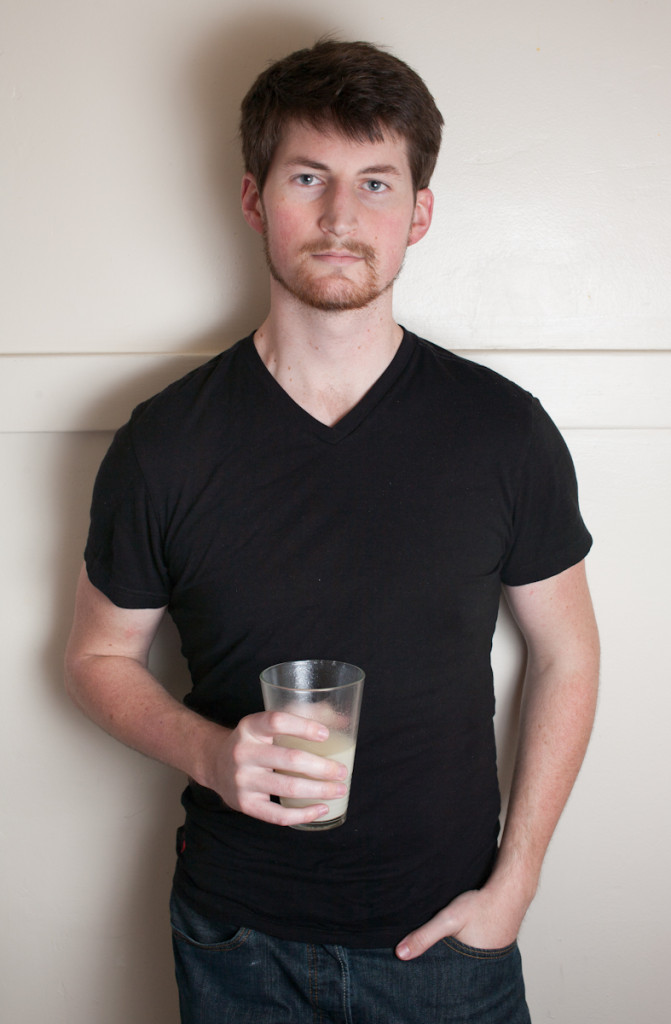 Rico Gagliano: So you get this stuff. It’s a powder and oil, and you mix those with a certain ratio of water, and that is the proportion that everyone gets. It seems to me that everybody has different nutritional needs. Some people are iron-deficient, some people will naturally eat more of something because their body demands it. Is this really a one-size-fits-all substance?

David Renteln: It’s as close as one-size-fits-all can get. As far as iron deficiency or wanting to eat more, it has a ton of iron from added vitamins as well as natural iron in the rice protein. And as far as eating more, you can always mix up another bag of Soylent; it’s one calorie per milliliter. One of co-founders, John, is 6’8”, and he needs about 3,800 calories per day sometimes when he’s very active.

Rico Gagliano: Are there side effects? I had read somewhere that gas was an issue for some people.

David Renteln: That can be an issue for some people. And it was especially an issue in early iterations of the product, when high qualities of sulfur were involved. And that was quickly, er, addressed.

Rico Gagliano: I can imagine!  That’s what beta testing is for.

David Renteln: It is! There was a bug in the product.

Rico Gagliano: Are you subsisting on this entirely?

David Renteln: Not entirely; it makes up the bulk of my meals. I do breakfast and I do lunch pretty much every day. Especially weekdays. I find it very easy to wake up in the morning and mix up a pitcher of Soylent. I don’t have to worry about what’s for lunch or what I’m gonna get. I don’t have to leave my desk if I don’t want to. It’s a problem that’s just solved.

Rico Gagliano: But I guess that’s what gets me: this idea of stopping to eat food as a “problem” that needs to be “solved.” I understand that sometimes it’s an inconvenience, but, like your CEO, there’s a whole subculture of people who want to subsist on this for long periods of time. I don’t know why, but it feels worrisome to me. I think about the movie “Brazil,” where they’re in a fine restaurant and everybody’s ordering variations on the same lifeless paste. It’s almost like the definition of a totalitarian society. Is the goal here really to eradicate the need for food?

David Renteln: We’ve heard that concern before. It’s not so much us wanting to replace food as much as wanting to replace a staple meal and make food more convenient. And you can replace meals that you don’t enjoy. I don’t know what that I might be for you.

Rico Gagliano: Oh, there are no meals that I don’t enjoy, unfortunately!

David Renteln: Well, for me, junk food is something that I try to get away from, and I find Soylent is very useful in helping me avoid that. But I still very much enjoy going out to a nice restaurant where there’s a dish that is almost more of an art than a meal that I would need to subsist.

Rico Gagliano: You mentioned trying to get away from junk food. Something that would satisfy you beside junk food. Is it satisfying?

Rico Gagliano: Even though it doesn’t have a chew to it? I did an interview with a guy who did a certain type of cleanse and he found that after a week he was really yearning to chew something.

David Renteln: We have heard that some people miss the urge to chew, and we recommend that they chew gum.  But we don’t recommend they consume unhealthy calories, just to satisfy a mechanical urge.

Rico Gagliano: All right, well let me taste some of this.

David Renteln: Sure. We brought you some here.  It’s in a 2-liter pitcher …

David Renteln: It is beige. We purposely designed it to be very neutral. For taste and texture. If this is something that you’re gonna to have for a large percentage of your meals, you would get tired of something that has a very extreme texture or taste.

Rico Gagliano: So it’s gonna be somewhat bland I guess, is what you mean by “neutral.”

David Renteln: Yes, but I prefer “deliciously neutral.” And an advantage there is that you can customize it by blending it up with berries or peanut butter, and everybody has their take on it.

Rico Gagliano: OK.  Although when you start doing that, you’re kind of missing the point, it seems like.

David Renteln: Well, since it’s so amenable to customization in terms of taste, you wouldn’t actually have to blend very many berries, for instance. The nutrition wouldn’t really change very much.

Rico Gagliano: Initially smelling it, it smells a little bit like protein powders that I’ve had after a workout or something like that.

It is very neutral. It’s not unpleasant at all. It has a kind of graininess on my tongue. Kinda the consistency of watery cake batter. The flavor is maybe a little nutty?

I can imagine drinking a lot of this, but do you know people that have lived off this other than your CEO?

David Renteln: Yes. A number of our customers have ordered large amounts and stated to us their intention to live on it for long periods of time.

Rico Gagliano: What kind of people are those? Who, in your experience, wants to eradicate the pleasures of food from their life forever?

David Renteln: We have a very, very colorful community, and we have people who are chained to their desks some days and can’t get away, or don’t want to, in terms of efficiency. We have other people who really want to use this for, say, a camping experience. Then you can see how it actually is very energetically efficient to carry a lot of powder with you.

Rico Gagliano: Although you can’t roast this over a campfire. Alas.