Have you ever been threatened in front of someone you love? How did you respond? How did they respond? Did it change your relationship? These are the questions Swedish director Ruben Östlund explores in his film “Force Majeure.” The movie picked up a jury prize at Cannes, has received critical acclaim around the world, and this week is being released in the United States. It’s about a young family who goes on a vacation at a fancy ski resort but, early on, an avalanche occurs. Although they survive, it shakes up thier marriage.

Brendan Francis Newnam: Ruben, thanks for joining us.

Brendan Francis Newnam: One reviewer described this film as one that will, “Throw a wrench into many a date night.” What do you think is the best way to see this film? Alone or with a loved one?

Ruben Östlund: Well, I think one of the goals of the film was to raise the percentage of divorce in society. So…

Ruben Östlund: Yeah, yeah. I hope I will. Yeah, so, I want everybody to consider the film like a relationship test. They can go together and, instead of spending like ten or twenty years to get it, maybe you can come to a quicker decision.

Brendan Francis Newnam: It’s cheaper than couples therapy. You can just check it out.

Brendan Francis Newnam: So, explain in more detail what the film is about and why you made it?

Ruben Östlund: The situation is the avalanche is approaching an outdoor restaurant and, suddenly, the father in the family is getting so scared and he runs away and abandons his wife and his kids. Then it turns out to be no catastrophe. It’s only snow-smoke that reaches the restaurant.

I think the situation is immediately triggering questions. What would you do if you were in a catastrophe incident like this? How would you handle it?

Brendan Francis Newnam: It is interesting to hear you talk about it in terms of masculinity. Because, when I was watching this film, I was thinking, “Alright, yeah, this gets at these essential questions about what it means to be a man,” and yet, it doesn’t necessarily have to be viewed through the filter of gender. Right? I mean, it’s about what it means to be human. The survival instinct, the fight-or-flight instinct, is universal, across genders. So it’s interesting. You really saw this as specifically, like, he failed as a man, not as a human?

Ruben Östlund: No, of course I see it also from a perspective of being a human. But I guess that it raises that question about the expectations of gender, expectations on the man and the woman.

I think I was interested in it also because, if you look at cinema history, I would say that the most-reproduced role in cinema history when it comes to the man, is the man as hero. But, when you compare that to statistics from, like, maritime catastrophes, you can see that the percentage of survivors, the one that survives most, is men in a certain age. The one that dies is women and kids. We have all those myths about, for example, the Titanic, when they say, you know, “Women and kids first in the lifeboat,” but when it comes to survival instinct, the men actually have the ability of acting a way, abandoning everyone else to save himself. And I thought these facts were tragic and comical at the same time. 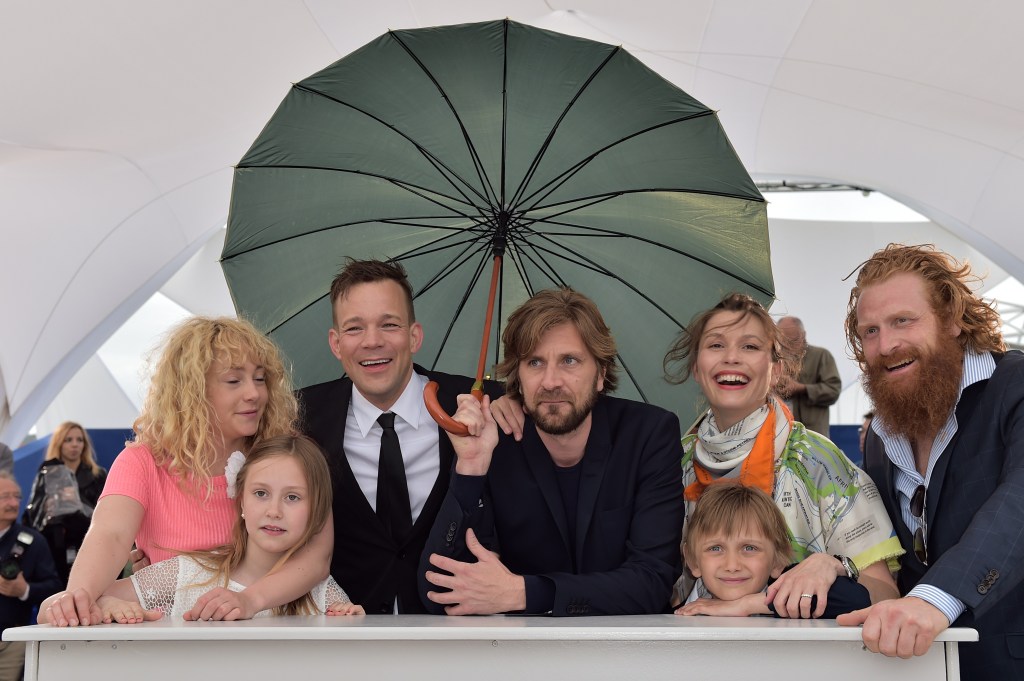 Brendan Francis Newnam: Certainly a rich vein to mine for a movie. Yet, if we’re going to do pop-psychology, which, since I’m just a journalist and you’re a film director, that’s all we can do, [the film’s character] Thomas is the provider for the family, he’s the only one who earns an income, he’s thier pipeline for food, and he is critical to thier survival. His wife raises the kids. Maybe he was protecting himself to protect the family because he thought, you know, on a another level, that, without him, they wouldn’t survive.

Ruben Östlund: Yeah, sure, maybe. And also, I think that the roles of the man and the roles of the woman in the nuclear family is quite limiting. And it’s obvious that couples that have been in the crisis situations like this have a problem to get over it, have a problem to continuing together. I actually read an investigation about airplane hijackings and you could tell that the frequency of divorce is extremely high after airplane hijackings. And I think it says something about the expectations we all have on each other. We not very often are facing survival instinct, therefore we don’t really know how to handle it. We project disappointment and things like that on our partner.

Brendan Francis Newnam: Is the logic behind that that part of the reason we create a nuclear family is to feel, like, a level of protection. And when that gets tested, when it turns out, you know what, there are crazy events in the world your partner is unable to protect you from, that kind of makes people question whether or not they should even be in relationships?

Ruben Östlund: The thing is… The role is that the man is expected to stand up to the outside threat, but in our society we don’t use this role of the man that much any more. And, so, I think we can question if we need him at all.

Brendan Francis Newnam: I’m curious how this movie went over in your native Sweden, which is on the vanguard of feminism – there’s a feminist political party, the government created a genderless pronoun – what has the reception been there?

Ruben Östlund: Well, there’s a lot of feminists that have watched the film and also quite famous ones that have been writing articles about it and so on, and I can tell there is like, even though we don’t want to admit it, there is still, like, a war between the sexes. Still a war between genders.

So, I guess, the ones that are really provoked from the film, are the men that are like 60-plus or something and they are so provoked of the character of Thomas. I mean, I’m really pushing him down on the bottom. I’m letting him cry the worst man-cry ever. I’m letting him be really, really pathetic. What I this is very humorous is, if you look at Hollywood movies, they always start with a character that loses his dignity and then gets his dignity back before the film ends. In my films, all the characters lose thier dignity and never get it back. And I think that is actually how it is in real life.

Brendan Francis Newnam: Ruben, thank you so much for coming by and chatting with us about your film.

Ruben Östlund: Thank you so much.