When actor Rich Sommer joined the cast of television series “Mad Men” in 2006, he didn’t know how big a hit the show would be – or if any given day would be his last on the job. With the second half of the show’s final season in the works, we invited Rich to join us onstage to talk about his character, the show, and its two favorite vices: smokes and booze. For good measure he threw in the sordid history of the card game “Uno.”

Brendan Francis Newnam: Happy to have you here! Your character, Harry Crane, has gotten more interesting this season. He’s always been interesting, but he was kind of meek, and now he’s kind of become a little more powerful.

Rich Sommer: Yeah. He seems to have sort of really gotten…

Brendan Francis Newnam: So, you’ve been doing this for years. At what point were you, as an actor, like, “Oh, cool, I’m gonna get to continue to be on this show.” When did you know your character was gonna stick around to the end?

Rich Sommer: Well… never. I was always terrified that, with each script, we might open it and find out that Harry gets his just desserts and is fired, or at least relocated.

Rico Gagliano: What is that like? Basically, your fate is being decided by this group of writers that, on any day, can stop this portion of your career.

Rich Sommer: Yeah, well, it’s awful. But that’s sort of the nature of the job that I chose, to put my entire fate in the hands of other people. I have very little control over what happens in my life. 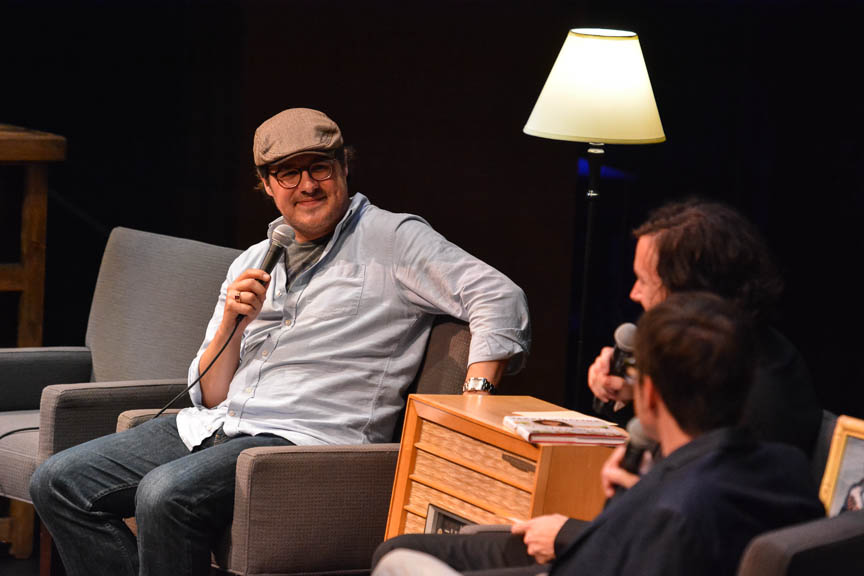 Brendan Francis Newnam: Well, we have a clip, here. The writers do some good things for you, as this clip will demonstrate. In it Harry, for once, gives the show’s lead character, Don, information that Don really needs.

(Harry and Don meet at a bar.  Harry informs Don that Don’s colleagues are trying to force him out of the company. Don is blindsided.)

Rico Gagliano: That’s actually a big moment in that series.

Rich Sommer: Yeah, yeah. I mean, I was obviously very excited when I saw that scene. I love any time that I’ve gotten to have one-on-one scenes with Jon [Hamm]. They have really only been a small handful, but at least two of them have ended up being sort of pivotal moments for Don: That one, and the other was at the end of the first season, when Harry sort of inadvertently gives Don the seed that becomes “the carousel speech,” which is sort of like the most well-known moment from the show.

Rico Gagliano: This is true. We did wanna ask, by the way, one question about that scene. You’re drinking in that scene. That happens occasionally on “Mad Men.” What are you actually drinking? ‘Cause God knows it can’t be booze.

Rich Sommer: Can’t it be booze? Sometimes… well, 98% of the time, it is like a watered-down iced tea or watered-down Diet Coke. But, you know… I mean, through no fault of the producers or anyone who works for AMC or Lionsgate, there have been times that I perhaps have found my way to an alcoholic beverage in there.

There was one scene in particular where, during the first season, we go to P.J. Clarke’s in New York.  And we’re all doing the twist, and there’s this moment where Pete Campbell and I finish a beer and I say I’m “going back to the well.”  And Vinny [Kartheiser] and I found some real beer, and it’s the first and only time, I’m happy to say, that I missed a cue for lack of sobriety.

We had done several takes, and finally I was sitting there, sort of listening to the music, looking around.  And I heard the director, Phil Abraham, say, “Rich! Hey, Rich! Are you gonna go?” “Is it now?” And then I did my line – and switched from the real beer to the fake stuff.

Brendan Francis Newnam: So it wouldn’t have been the writers’ fault if you lost your job then.

Brendan Francis Newnam: So, “Mad Men” is almost over. I mean, they are dragging it out, but… what is the ratio of “sad” to “relief” you’re feeling?

Rich Sommer: I mean, for me, personally – I don’t know if I can speak for every single person – but I can speak for most of us and say it’s a very high sad to relief ratio. We’re really, really bummed.

It’s a really tight group, and I think that all of us are aware of the fact that, even if somehow we were to find ourselves on another show, it would neither be the same sort of group, nor the same sort of storytelling that we’ve been fortunate enough to be a part of.

Rico Gagliano: We’ve heard that there’s a place – it’s called “the porch,” or something like that – where you guys all hang out?

Rich Sommer: Our base camp. Yeah, base camp… you know, it’s right outside of the hair and makeup trailers. On most sets, you come out and you do your hair and makeup, you go back to your trailer, and you wait for them to come and say, “We’re ready for you.” But on this show, no one ever spends any time in their trailers. It’s a very social place, and so the production caught onto that, and each year, they’ve given us a gift of a base camp enhancement.  And now, what started as literally a little block of cement is now…

Rich Sommer: It’s a two-level deck, and on the top deck, there’s lounge seating for twelve with a fire pit, and then down here on this one is a game table with, you know, cribbage, and dominoes, and… 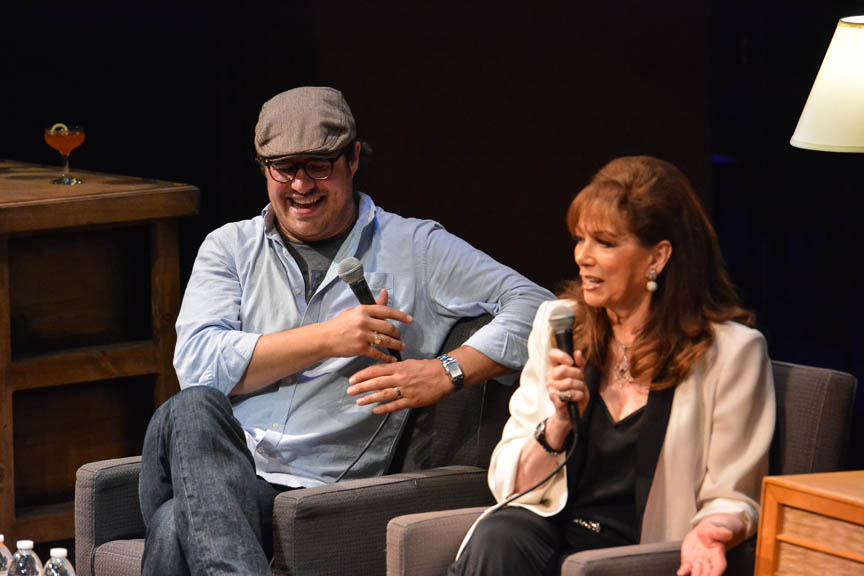 Brendan Francis Newnam: All right. Well, you’re on our show, so we have to ask you our two standard questions. And the first question is: What question are you tired of being asked?

Rich Sommer: I will not miss being asked if we are smoking real cigarettes on the show. Every interview, with the exception of this one, we’ve been asked that.

Rico Gagliano: We did the booze thing — we went the other way.

Brendan Francis Newnam: But you know, the point of this question is for you to give us that answer, because not all of us know about it, so…

Rich Sommer: No, they are not real cigarettes.

Rich Sommer: Yes, you’re shocked, I’m sure. They’re not real cigarettes. It’s California workplace law. Although I will say that on the pilot, they were real cigarettes because we were in New York, and also, none of us knew that we would… It was my first job, really, so I did not know that I would be smoking, over the course of the day, five hundred cigarettes.

Rico Gagliano: And you’re still here to speak to us.

Rich Sommer: Yes, I made it to here, somehow. 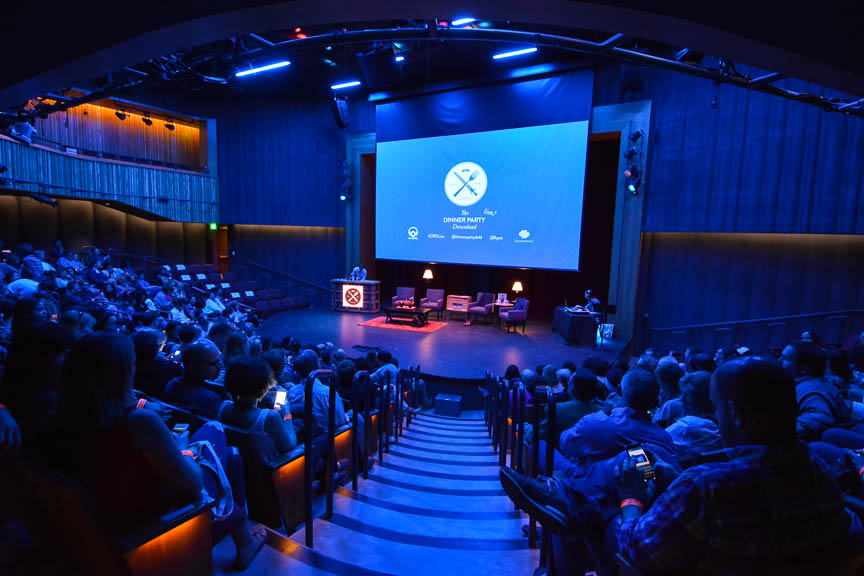 Rico Gagliano: All right, well, our second question is kind of the flip: Tell us something we don’t know. And this can be about yourself, or anything on earth.

Rich Sommer: Okay. This is a tough one. I wanna try and say this concisely because I know we’re gonna be on the radio, but, this is something you don’t know.

Rico Gagliano: Can we get Michelle Phillipe out here, by the way?

Rich Sommer: — He spent $8,000 to make 5,000 original decks. Robert Tezak, who was a funeral parlor owner in Joliet, Illinois, bought one of the decks, came over and said, “I’d like to buy your game,” bought it, founded International Games, which then became a huge success. Everything that we know about Uno from like the early ’80s is from International Games.

Tezak then – this is all alleged – but he allegedly was either smuggling cocaine in between decks of Uno to China… or was doing a ton of cocaine himself. Either way, the building that housed all of the evidence burned down.

He was found guilty of arson, went to prison — for arson, never for the other thing. Was away for eleven years, got out in like 2001 or 2002 or so, and then just last year was headed back to prison for not paying the fines that he had been paying, because he says he’s out of money because all the Uno millions are gone.  Even though he drives still his mother’s car, which has the license plate MR UNO on it.

That’s all I’ve got.

Brendan Francis Newnam: Wow! So, if you don’t get another TV show, you can be a docent at a nerd museum.

Brendan Francis Newnam: Rich Sommer, thanks so much.