My name is Molly Ringwald, and the name of the album is “Except Sometimes.” You know most standards albums, you can count on “Embraceable You,” or “My Funny Valentine” because they’re such good songs. But I tried to pick ones that were standards but maybe a little bit more obscure and not recorded as often.

And then of course, the last song is much more contemporary and I recorded it because it was in “The Breakfast Club.” I think that there’s not even one original chord in the song.

But I thought it was a really nice way to kind of integrate who I was, or what I’m known for into who I am now. So, just like “Don’t You Forget About Me” I have another list of songs that I think are so great that they could be standards, and should be standards.

Elvis Costello, I think over the course of his career has written so many songs, but one in particular that I love is “I Want You.” It’s so emotional, and it’s a song about obsession.

I remember when the album came out, and somebody said that it sounds like an obscene phone call. He knows that this woman is cheating on him and stepping out on him, and it’s everything that you would say to that person.

It’s just relentless. You know, there’s not a lot of musical variation in it, but it just really gives you that sense of, oh my God, he’s gotta get out of this place. He’s just gonna go mad.

2. “Glory Box (Give Me A Reason To Love You)” by Portishead

My number two song, I was thinking of the Portishead song, “Give Me a Reason to Love You.” That song is already so bluesy and sexy, I think it’s just sort of a natural to turn it into a jazz ballad.

Give me a reason to love you. I don’t like perfect voices. It’s hard, because I’ve been singing for so long.

I started out with my dad who wanted to make sure that I didn’t sing flat, so he always said, if you have to pick one, pick sharp, you know. But that’s not really what I enjoy. I’m very interested by flaws and emotion in voices, and I think that she has one of those perfectly emotional voices.

3. “Only A Monster” by Franklin Bruno, as sung by Jenny Toomey 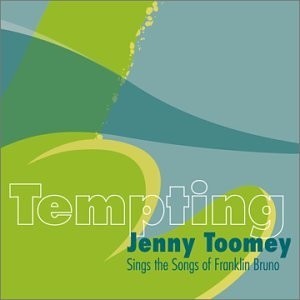 My third song was written by a lyricist composer named Franklin Bruno, and it was recorded by Jenny Toome. The song is called “Only a Monster.” That song is basically about again, a failed relationship.

And you know, the lyrics are sort of like, “I know you’re not a vampire, but only a monster could basically treat me the way that you’ve treated me.” I love when somebody is singing something that’s incredibly harsh, but with a really, you know, beautiful, pure voice.

Along with the idea of standards, there are certain songs that I think belong in the vault. The vault is basically songs that are great, but they have been played and sung so much, you never want to hear them again. The songs don’t disappear, they just stay in the vault for 200 years, for future generations, you know? But I don’t need to hear “Hotel California” one more time.