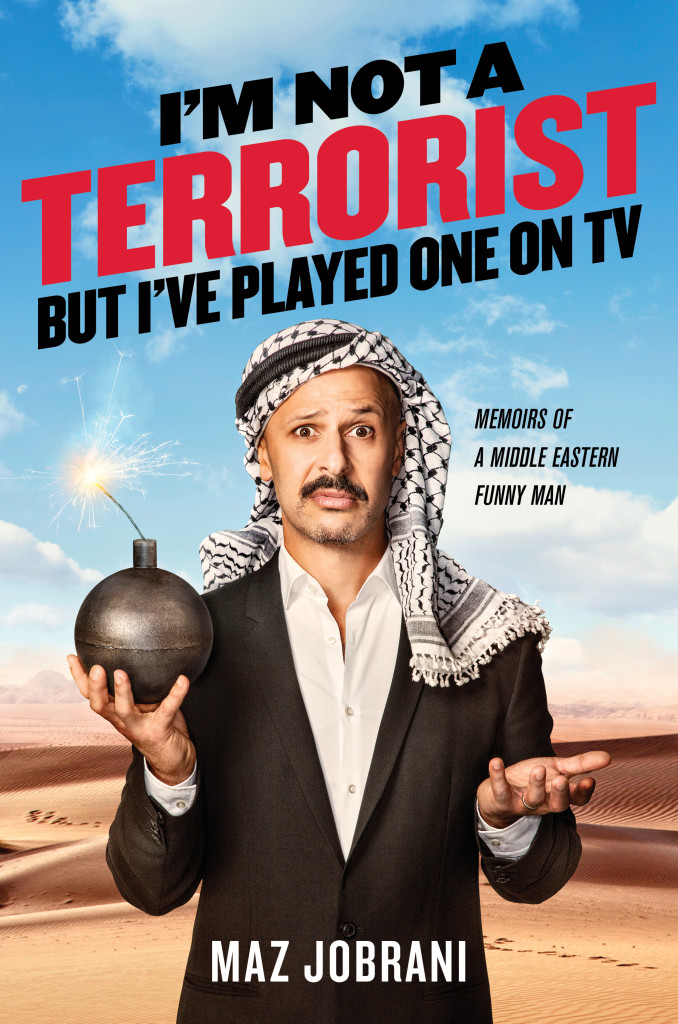 Brendan Francis Newnam: Each week you send in your questions about how to behave, and here to answer them this week is comedian Maz Jobrani.

He’s Iranian-American, which is relevant because he’s perhaps best-known as a member of the Axis of Evil Comedy Group. That’s a group of four Middle Eastern comedians who have toured together. But Maz is also his own person, and that person has made lots of TV appearances on shows like “The Colbert Report” and “Late Night with Craig Ferguson.”

He’s also a regular panelist on the public radio quiz show “Wait, Wait, Don’t Tell Me,” which I’ve never heard of — have you heard of that one, Rico?

Rico Gagliano: Sounds weird to me.

Maz Jobrani: It is weird.

Brendan Francis Newnam: Anyway, his new book is called “I’m Not a Terrorist but I’ve Played One On TV: Memoirs of a Middle Eastern Funny Man.” And Maz, welcome!

Maz Jobrani: Thanks for having me!

Rico Gagliano: Thanks for coming. It’s clear from the title of your book, obviously, that you don’t always play yourself. You’ve acted in film and TV, including “The West Wing,” is that right?

Maz Jobrani: Yes, I did. I played a Saudi ambassador in “The West Wing.”

Rico Gagliano: Of course; you have the diplomatic air about you.

Maz Jobrani: I do.

Rico Gagliano: And you spend a lot of time in your book actually talking about the kind of roles that you get as a Persian-American. Can you run us through a few of these?

Maz Jobrani: Sure.  So I always say, when people find out you’re of Middle Eastern descent, the kind of parts that you get… you tend to die a lot.

So I did that, I did a Chuck Norris movie of the week where I played an Afghan terrorist who wanted to blow up a building.

Rico Gagliano: Has it gotten any better since then, do you think?

Maz Jobrani: No, I think what happened was… after that, I said, “No more terrorist parts.” I told my agents no more terrorist parts.  And then one more came up for the TV show “24,” where they go, “It’s a terrorist…” And I said “No thank you!”  And then they go “…But he changes his mind halfway through the mission.” I go “Ah, the ambivalent terrorist! I’d like to try this!”

So I played that and then after that I said no more. But it’s not really that much better, in that there are still a lot of parts like that. I just turn down the auditions now.

Brendan Francis Newnam: So you act, but you’re also a standup comedian, and you talk a lot about being a Persian-American. You’ve also toured the Middle East, toured Iran. What, if anything, do they find funny over there that we don’t?

Maz Jobrani: For the most part they’re laughing at a lot of similar stuff. What’s crazy is, with the internet now, the rest of the world knows so much about America, while America knows a lot less about the rest of the world. So you could go to Saudi Arabia and do a joke about Lindsay Lohan, and they’d be like, “Oh that Lindsay, always in the rehab!” You know?  They get it! It’s crazy.

Rico Gagliano: But is there… I mean, is there something that would not translate here, I guess, that they would laugh at?

Maz Jobrani: Well this is where you start walking the fine line. Because I was recently in Saudi Arabia and I was doing a show. And they’ve just started doing “public” shows. Before, it would be a promoter, who would do kind of like a private show. You’d end up doing the show at like the Venezuelan embassy, or you would do it at a compound where there’s a lot of expats living, and then the Saudis who are Western-educated would come and watch.  And the crowds would be mixed.  Now that they’re doing it in public, the left half of the crowd are all a bunch of dudes. And the right half are like families. So you do like a fart joke, and the left half, the dudes, are just dying of laughter. And the right is kind of looking at you like, “What is this all about?”

Maz Jobrani: Then you do a joke about your kids, and the right half is laughing, and the left half has no idea what you’re talking about.

Brendan Francis Newnam: Well, Maz, we have etiquette questions submitted by both families and single men. Are you ready to tell our audience how to behave?

Maz Jobrani: Yes, and I will move to different sides of the microphone as I do it.

How a spoon is a direct line to a nap

Rico Gagliano: It’s gonna be a good workout. Here’s something from Amir in Austin, Texas. And Amir writes:

“Why do we Persians insist on eating everything with a spoon?”

Maz Jobrani: Well Amir, that’s a good question, and the answer is very simple: Because we want to get more bang for our buck.

Maz Jobrani: Because you take… Listen, you bring me a Japanese fellow with the chopsticks. Then you bring me a white Anglo gentleman with his fork. And now you bring me that Persian with the spoon. And you put that rice in front of these three, and you see who finishes first and gets to their nap.

Rico Gagliano: Well it depends on what kind of rice though, right? If it’s sticky Japanese rice, then perhaps the chopstick is efficacious.

Brendan Francis Newnam: Sticky aside, so the nap is the key motivator there, you’re saying, for the Persian?

Maz Jobrani: Listen, gentlemen, yeah.  Ultimately t’s about getting to the nap, because in Iran they actually take siestas.

Rico Gagliano: Oh, I’m so jealous. All right so Amir, there’s your answer: The spoon is just the straightest line between rice and sleep.

Maz Jobrani: Sleep it up.

“I live on the second floor of a three story apartment building. My new upstairs neighbor wakes up every day at 7 AM. I know this because they jump out of bed and proceed to stomp around for the next 30 minutes. Am I within my rights to ask them to tread more lightly?”

Brendan Francis Newnam: Can you remind us?

Maz Jobrani: Well he just opens the window and he starts cussing them out!  Like “Shut up! SHUUUUT UP!” You know, those are words you can use Graham. You’re in Brooklyn!

Brendan Francis Newnam: But it’s so cold in Brooklyn right now if you open the window, you might freeze like a gargoyle.

Brendan Francis Newnam: But what if your neighbor is Jake LaMotta and you’re just a public radio person.

Maz Jobrani: You do this, but you keep that door locked.

What do “real” Indians do?

Rico Gagliano: All right. Here’s something from Maya in Nashville, Tennessee. Maya writes:

“I am a half Indian, half white-Jewish-South African. My co-workers and friends will sometimes try to correct me about my own culture and cultural experiences. Things like ‘…but real Indians X, Y, or Z.’ How should I respond without seeming uptight?”

Maz Jobrani: Maya, it’s very simple.  You’re right — you’ve got to walk a tightrope here, right? So you’ve got to come back with like, “Listen, half of me agrees with you. The other half?  Not so much!”

Brendan Francis Newnam: It’s wild though: Basically, Maya is getting in trouble for not confirming stereotypes, it sounds like.

Brendan Francis Newnam: “No, no, you’re supposed to like spicy food, Maya! At least half of you.”

Rico Gagliano: Is that what a real Indian sounds like? That’s interesting.

Brendan Francis Newnam: Can you do a Saudi prince?

Rico Gagliano: Nailed it!  Maz Jobrani, thank you so much for telling our audience how to behave.

Maz Jobrani: Of course. Any time.