Rico Gagliano: Mark Adams has written for GQ, The New York Times, many more. He wrote the bestseller “Turn Right at Machu Picchu,” which Men’s Journal named “One of the 50 Greatest Adventure Books Ever.” His new book, “Meet Me in Atlantis,” chronicles his adventures with modern day Atlantis seekers. Mark, welcome.

Mark Adams: Thank you for having me.

Rico Gagliano: Thanks for coming. So, for those of you who are only dimly aware of the concept of Atlantis, can you give the quick elevator pitch of what believers say it was?

Mark Adams: Well, the general pop culture version of Atlantis is this sophisticated island civilization that suddenly sank beneath the waves in a day and a night. That’s the Disney version.

Rico Gagliano: And this was centuries ago.

Mark Adams: This was supposedly, yeah, long before recorded history.

Rico Gagliano: First of all, many people would be surprised to learn that Atlantis is not part of ancient Greek religious mythology or something. It was written about first by Plato. 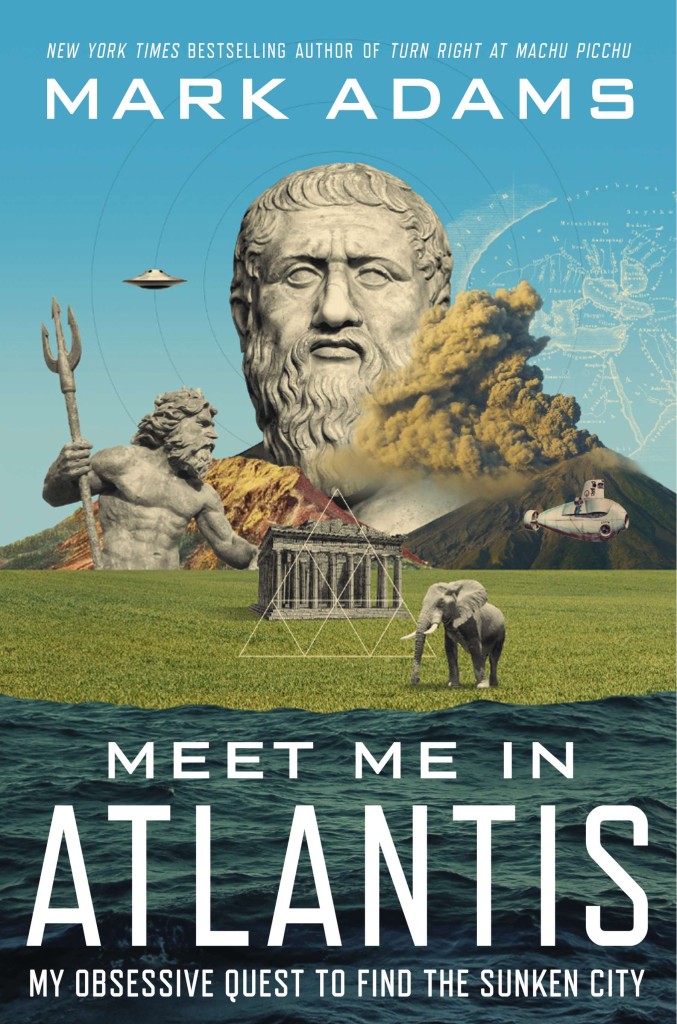 Mark Adams: It was. That’s what first attracted me to the story. You have this Atlantis tale, which is usually grouped with Bigfoot, UFOs, crop circles, and then you have Plato, arguably — or maybe not arguably — the greatest thinker in Western civilization history and he’s the sole source for the Atlantis story, Plato.

Rico Gagliano: Not known as a crackpot.

Rico Gagliano: The big question among the people that you speak to is whether Plato was just making Atlantis up to make a rhetorical point or actually passing on a historical tale that had been passed down to him by his forefathers. Explain the evidence of each of these.

Mark Adams: Well, the thing about Plato’s story is he gives all this incredible detail. He talks about landmarks that can almost, but not quite be identified. He talks about building materials, he talks about the island position relative to a land called Gades. There’s so much detail in there including numbers, all sorts of numbers. You can’t help but start to wonder: was he telling the truth about this? I mean, it’s almost like he’s giving GPS coordinates from the distant past. What has happened over time is you’ve got academia, which treats Atlantis pretty much like kryptonite. Nobody wants to touch it with a 10-foot pole.

Mark Adams: Well, every email I sent off to an email address ending in .edu, I had about a two in three chance that no one would ever get back to me. The “A” word is untouchable. On the other hand, you’ve got all these amateur researchers who see all this detail, and they say, “Oh, my god, this is essentially a treasure map, and we’re going to use all these clues to solve the greatest mystery of antiquity.”

Rico Gagliano: Now, I have to say, the former seems more likely. There was not this mythical, wonderful city centuries ago that has magically disappeared. But then, you know that people have actually used old tales to find actual evidence of mythical places.

Mark Adams: Exactly. Myths were treated purely as fiction up until the middle of the 19th century when there was a German named Schliemann who took Homer’s Iliad to find the city of Troy in Turkey, and after that, it was like all bets are off. People started looking for Atlantis almost immediately. There was a sort of crackpot Minnesota congressman, ex-congressman named Ignatius Donnelly.

Mark Adams: And what Donnelly did was he took every scrap of evidence he could find and cobbled it together into this Atlantis theory, and used some of the brand new science — they were doing some of the first deep readings of the ocean at that time — and he said, oh, you know what? The Azores, the islands in the middle of the Atlantic, those are actually the tops of the mountains that were in Atlantis. Atlantis sank to the bottom of the Atlantic Ocean and that’s why so many people believe that is the case today.

Rico Gagliano: By the way, in the chapter that you read about Ignatius, there’s a quote from his book about Atlantis where he hypothesizes that the people of Atlantis sailed away to form “the Indo-European family of nations and the Semitic peoples.” I am part Jewish, so does that mean that I am part Atlantean, perhaps?

Mark Adams: I would say the chances that you are part Atlantean are roughly 98 percent, if not higher.

Mark Adams: Well, he takes that a little bit further if I may add. He says that the Atlanteans were circumcised. I don’t know how he gets this evidence and the fact that actuarial tables show that Jews live longer shows that Atlantis was a super-race.

Rico Gagliano: Wow! Now I feel really great about myself.

Rico Gagliano: As crackpot as that stuff sounds, you spend a lot of the book exploring the more likely places that people have posited that Atlantis could have existed.

Rico Gagliano: Which did you find the most compelling?

Mark Adams: Perhaps the dark horse candidate, which a lot of people have latched onto is, I met this IT specialist from Bonn, Germany, who took every detail from Plato’s story and plugged it into what he calls “hierarchical constraint satisfaction,” a sort of statistical modeling.

Rico Gagliano: Yeah. Well, you start the book with this guy.

Mark Adams: I do.

Rico Gagliano: You seem to really want to believe him above all of these folks. How did it turn out?

Rico Gagliano: Yeah, I have to say that when you list the places that Atlantis could possibly be, I’m like, that’s a pretty good gig you just made for yourself, Mark. You get to go to Morocco and Spain.

Rico Gagliano: Confirmation bias. Donovan’s song “Atlantis,” which starts with Donovan reciting this long, almost Spinal Tap-like history of Atlantis, is there anything remotely accurate about that?

Mark Adams: You know what? He might as well be reading that straight out of Ignatius Donnelly’s book, all that kooky stuff.

Mark Adams: Yeah, they all got in their ships and they went to far lands and started the master race. I’ve done a few interviews for this book over the last couple days, and do you know how many times I’ve heard the sound of Donovan’s “Atlantis” as the intro? If you’re going to dub it in, please do it after I leave. That’s all I ask.