“Lickestra” is a collaboration between artist Emilie Baltz, object designer Carla Diana, and musician Arone Dyer that explores the relationship between sound, movement, and taste. A specially-designed, sensor-activated ‘cone’ holds electricly-conductive ice cream, and the act of licking the ice cream triggers a variety of tones.

Two of the collaborators, Baltz and Diana, showed Brendan the installation, and explained that the project does more than just create a new kind of instrument – it also engages with how sound effects our experience of food and with ideas of mindfulness, both in eating and in modern life in general.

Emilie Baltz: Every time we eat we make a sound. And that sound exists in two spaces: it exists inside of us and it exists outside of us. And you know that classic example, you’re sitting in the movie theater with that darn bag…

Brendan Francis Newnam: I can’t stand that sound. When they crunch on the popcorn.

Emilie Baltz: Or you’re in a meeting and someone decides to eat a carrot. What a great idea. No.

Brendan Francis Newnam: Or on radio. We get in trouble sometimes because we always eat on this segment, the main course. But the sound of mastication… Even that word. It’s gross. So why do we need to amplify this?

Emilie Baltz: That’s our immediate relationship to it, is that it’s gross – but actually this is not true. You look at any sort of industrial food product, chips are a great example of this, and they’ll actually work on the sound of it. We’ll manipulate the material to create a sound of freshness. There are many, many, many companies that go towards this where, we actually realize that the sound of it obviously relates to the texture of it. The sort of crisp, crunch, snap communicates to us.

Brendan Francis Newnam: Certainly, you don’t have to have the answer to what end, but making food sing, although fun and interesting in a gallery – and obviously I’m talking to you because it’s kind of fascinating – but really was there a practical application for this?

Carla Diana: Well, sure. We had a lot of conversations about modern life and about how we don’t actually stop to taste our food. And that this actually contributes to a lot of what we talk about [when we talk about] obesity and how the pace of our life is just making us go so fast that we’re not even appreciating the moments.

When you have the sound that accompanies it, it makes you really understand that moment.

Brendan Francis Newnam: Is that part of the reason you chose ice cream? I mean, of all the foods you could choose? Because do people stop and take it as a treat and they’ll be more contemplative of that?

Emilie Baltz: The gastronomic reason is that it’s delicious.

The other reason is that, from a technical standpoint, this is a way to naturally encourage people to use a gesture. The tests that we did before, sometimes we had to explain “Okay, please do this,” and it’s not as intuitive. But ice cream is intuitive, you just lean over and you lick it. 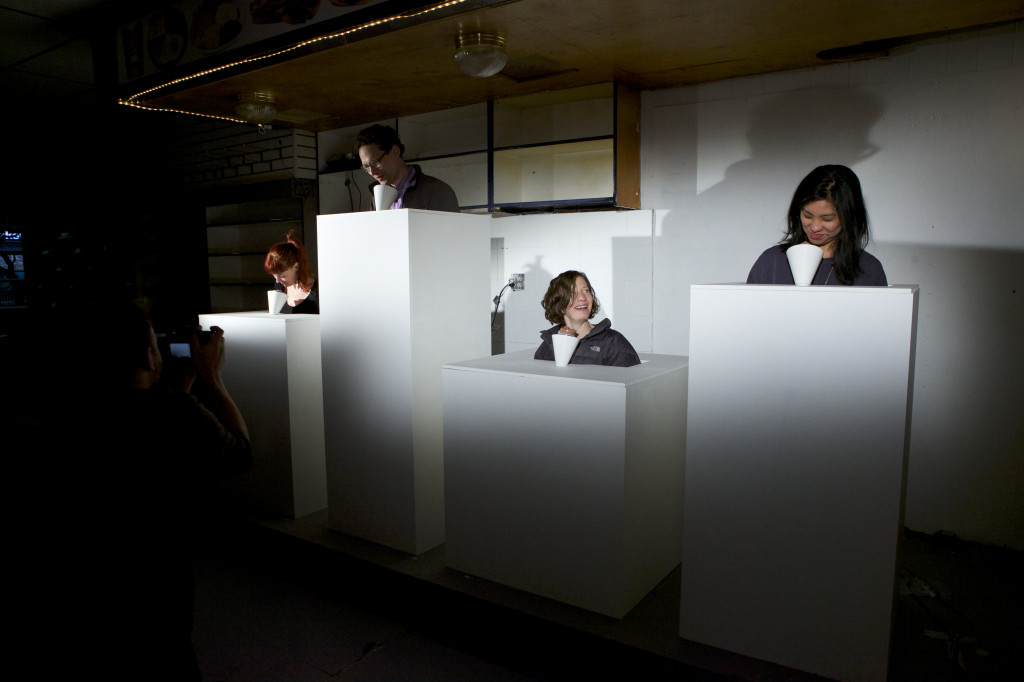 Brendan Francis Newnam: All right, we’ve waited long enough. We have a quart of ice cream here and we have these sensors. Their the shape of cones, like ice cream cones, but they’re much bigger than that. They look like mini megaphones. And you put ice cream in them and the sensors get triggered by the motion of the ice cream.

And that was an early lick sound. Oh, there we go. And Carla’s licking it and it’s making noise. I’m gonna try it. That is so cool.

What determines the different sounds or frequencies?

Emilie Baltz: So we have a four-part composition that we worked with a woman named Arone Dyer and each sound is assigned, each different track is assigned to a cone. So depending on the length of time that your tongue is on it it will modulate up and continue or you can start to play individual pieces.

Brendan Francis Newnam: So hence the “Lickestra,” because when you did this recently you had a handful of people doing different tones.

Brendan Francis Newnam: This seems like it runs counter, the wholesome, the natural.

Carla Diana: You might look at it that way if you just think about electronics and think anything electronic is somehow unnatural. But what we’re really doing is…

Emilie Baltz: Oh, that is on the radio.

Carla Diana: But what we’re really doing is we’re playing with the natural properties of that ice cream by riffing off of it’s conductivity.

Emilie Baltz: There’s another level of it too, is that though they’re, yes, food is of the earth and that it’s good for you, but that’s not the whole story. Since the dawn of man we started cooking, and cooking takes us one stop away from that.

So in doing that the transformation into cuisine, when something becomes cuisine it also becomes creativity. And this is an abstract way to start thinking about it, but food is also entertainment. It does feed us but it is also pleasure. It is also community. It is also happiness and delight.

Brendan Francis Newnam: But don’t you think restaurants will be intolerable if people start making their food sound like things? I can already barely hear what’s going on.

Carla Diana: Well it’s very possible you could have directed sound. Imagine if there were three tables and they started becoming an orchestra together and you actually had a reason to talk to other people.