The name “Kit Kat” sounds vaguely like a Japanese phrase meaning “good luck,” which is one reason Kit Kats are the most popular candy bars in Japan.  The other reasons are the unusual, often limited-edition Kit Kat flavors Nestle unleashes periodically on Japanese consumers, including soy sauce and baked potato.

Last week, L.A.-based food writer and Asian-food tourguide Clarissa Wei discovered that baked Kit-Kats — the latest and perhaps strangest variety to go viral in Japan — were starting to appear in Asian markets here in the USA.  Just in time for Halloween, Rico met with her at Nihaya Market in L.A.’s Little Tokyo to talk about (and then cook up) the bakeable bars.

Clarissa Wei: I think in Asia in general there is just an obsession with quirky treats, and flavors and whatnot. When I was in China, all the potato chips had the weirdest flavors. Anything from, you know, pizza-flavored candy to squid-ink-flavored potatoes. And I think they just have a much more versatile palate.

Rico Gagliano: What is the strangest Kit Kat flavor you have encountered?

Clarissa Wei: Definitely the baked Kit Kat bar. So I was taking a couple people on a food tour here, and when they ate it they were like, “This tastes kind of funky!” And then you look on the back and it’s like, “Oh you’re supposed to put in in the toaster oven.” So I think the fact that candy requires an extra step to cook is probably the strangest thing I’ve ever encountered.

Rico Gagliano: I mean, this isn’t so bad. When I buy a Kit Kat bar I’m not buying it to not be sugary.

Clarissa Wei: So you can see the edges kind of browning right now…

Rico Gagliano: Oh yeah, and kind of bubbling on the edges.

Clarissa Wei: You want to get a caramel crust on the top, like golden brown.

Rico Gagliano: The idea then, I guess, is that you’re taking what is normally a creamy outer coating with a crunchy inside, and you’re kind of giving the top of it a little crunch.

Clarissa Wei: Crunchy, yeah. It tastes a little like a biscuit, but a lot of people think the wafer is what’s baking.  But there’s already a cookie inside.

Clarissa Wei: No — and it’s funny, because a lot of the English publications wrote about this when it came out in March. They were like, “Oh, it turns into a wafer,” but the wafer is already in there.

Rico Gagliano: Don’t be fooled by the press!

Clarissa Wei: Okay, this is what we want — it’s kind of like golden brown on the top.

Rico Gagliano: It smells like a marshmallow right now. A roasted marshmallow. You’re now trying to get a piece of this off of the pan with a spatula, and… [laughing:] The two halves of the Kit Kat bar just separated and they’ve sort of come apart! So now we’ve got a mess of the charred candy outside of the Kit Kat, as well as the exposed inner wafer….

Clarissa Wei: Try it though. It is actually very good — looks are deceiving.

Clarissa Wei: Right? It tastes like a sugar cube.

Rico Gagliano: It does. The closest I can come is like a roasted marshmallow, except hardened and a little bit more caramely. 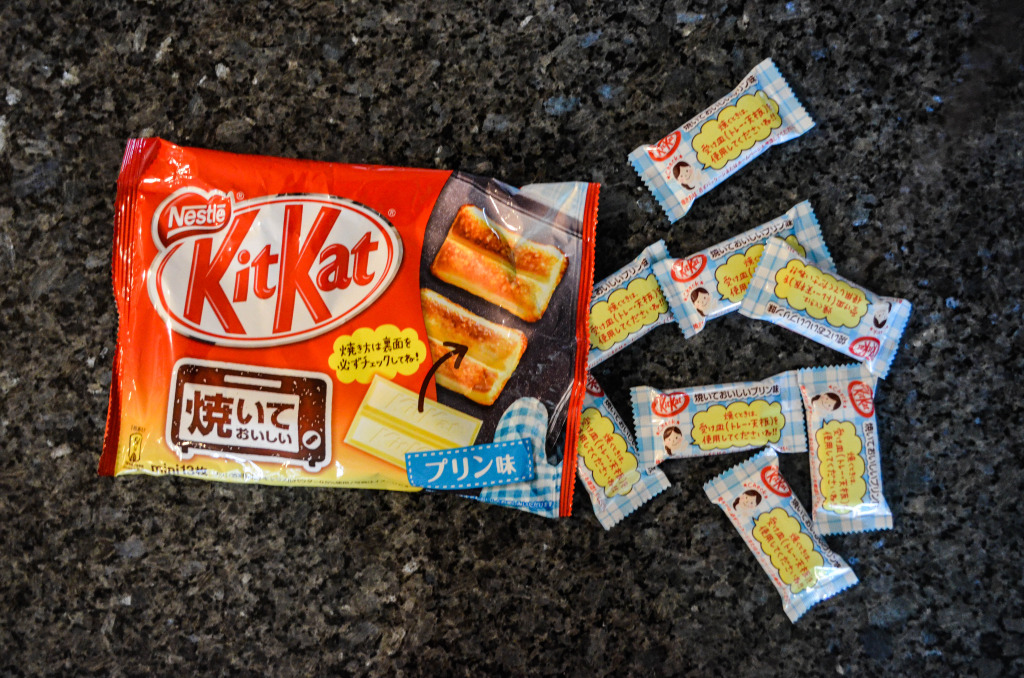 Clarissa Wei: And it has kind of a cookie texture to it, which is super interesting, because it looks like chocolate, but once you bake it, it turns into a cookie.

Rico Gagliano: That’s true. It’s really good, but I can slowly feel myself developing diabetes as we speak.

Clarissa Wei: Yeah, I can’t eat more than one half of a Kit Kat because this is intense.