Actor and comedian Kevin Hart has had scene-stealing small roles in big films like “The 40-Year-Old Virgin” and “Little Fockers.” And he had a big role in the big film “Think Like a Man.” But he’s best known for his stand-up comedy. This week “Let Me Explain” — a movie about his recent comedy tour — hits theaters. It was filmed mainly during a sold-out show at Madison Square Garden. Brendan chats with Kevin about his penchant for leather, his international fame, and his recent growth spurt.

Brendan Francis Newnam: You worked for a while in comedy before breaking through.  What led you to find your voice?

Kevin Hart: I think the one thing that’s most important is being yourself, you know? It took me a lot of time to realize that I didn’t have to pretend to be somebody else. I didn’t have to be a character on stage, I could be myself.  And being yourself, you develop a following, because you’re genuine — you’re being real. When people see that you have that quality, people root for you.

So, in the beginning of my career when I was attempting to be all of these other people, they were all pieces from someone else. Like, you didn’t know who the hell I was.  Once I grasped the concept of stand-up comedy, and of writing a joke, and making a segue make sense, then I said, “You know what, I’m in the Jell-o, I don’t have to try and pretend. I can talk about me and my problems.”

Brendan Francis Newnam: Was there a particular joke that really broke through for you, that made you think, “I’m onto something?”

Kevin Hart: Yes. I mean, in my first jokes I talked about my wife at the time, and how we basically got into an argument.

Brendan Francis Newnam: There is a thing that you also do with your comedy — for lack of a better word, I’ll call it the convoluted kind of story joke? And one of my favorite parts of the film is when you imitate a guy who’s lying about why he’s late for work, and he says that it’s because he saw a baby crossing the road.  How did this kind of become part of your style?

Kevin Hart: I don’t know. I just first want to say I don’t do drugs. So don’t blame it on that.

You know what, dude? It’s all about the way that you think, and I love putting that unexpected punchline in the story. I love going far left when everyone expects me to stay straight.

Brendan Francis Newnam: Are you like writing that on a laptop? Where are you building these crazy stories? 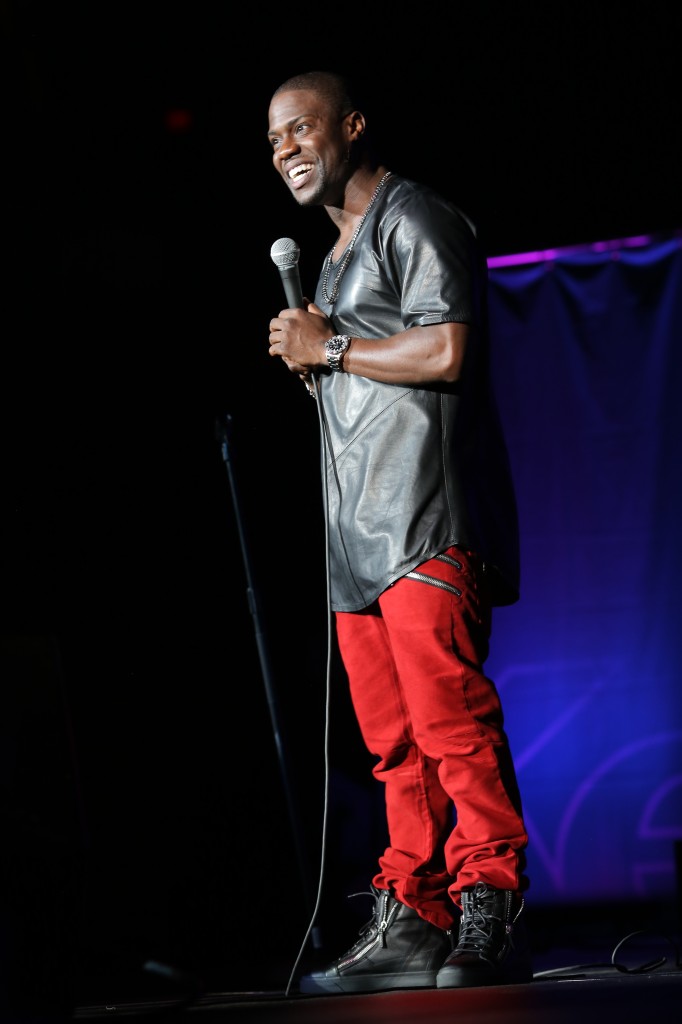 Kevin Hart: I just jot down funny thoughts on my iPhone or in a notepad. That’s what I do all day.

Brendan Francis Newnam: I’m going to quote you. You said once, “At the end of the day, I want to be part of the same conversation as Chris Rock, Eddie Murphy, Dave Chappelle, Bill Cosby and Richard Pryor.” First of all, is that why you wore that crazy leather shirt in the concert footage?

Brendan Francis Newnam: Cause you wear a black leather shirt, and Eddie Murphy famously wore the purple suit, and the red suit.

Brendan Francis Newnam: So your comedy is pretty raw, and your kids I think are probably too young to have attended one of your events, I’m assuming, but do you ever think about the moment when they’re going to tune in and check out dad’s specials?

Brendan Francis Newnam: But you’re not worried about the salty language and the kind of adult situations?

Kevin Hart: Well no, because they understand. They know what’s a bad word and what’s not, and they know what they can say and what they can’t say. Do kids cuss when they leave the house? Of course. How do I know that? Because I cussed when I left the house.

I remember that as soon as I left my mom’s house, I just started letting them fly, nobody was around me. I did it just because I could. So I imagine that my sons and my daughters are gonna do the same thing. It’s just the understanding of it.

Brendan Francis Newnam: We have two standard questions on our show that we ask each of our guests. The first question is: What question are you tired of being asked in interviews?

Kevin Hart: Did my ass really get stuck in the toilet in “Soul Plane?”

Brendan Francis Newnam: So “Soul Plane” was one of your first feature film appearances, and some people really enjoyed it, other people thought it was kind of goofy. This film starts with you touring all over, you’re international, you’re in Europe, and many people are like, “You’re from Soul Plane! The guy from Soul Plane!” which isn’t how people think of you in the United States, I think.

Brendan Francis Newnam: And did you want to take a picture and send it to the critics who maybe weren’t so laudatory about “Soul Plane?”

Brendan Francis Newnam: Our second question we ask our guests is: Tell us something we don’t know.

Kevin Hart: All right, I’m about to give you a great piece of information. You ready? I grew an inch the day before yesterday. I’m now 5-foot-5. Document it, write it down, and circle it. Yes.

Brendan Francis Newnam: That’s like Bobby Brady hanging off the pull-up bar to get taller.

Kevin Hart: This is huge.

Brendan Francis Newnam: How did you do that?  Did you go to a plastic surgeon?

Kevin Hart: Nope, no plastic surgery at all. I just did a bunch of calf raises, and eventually it hit the spot — so right now that inch is there. That’s all I needed.  I’m not doing any more, I don’t want to push the envelope, I’m happy with this height, this is a great thing.

Brendan Francis Newnam: Five-five is good. What happens when you’re children get taller than you? Do you think about that moment?

Kevin Hart: Well, no, ’cause I don’t think it will happen. If they do get taller than me, I’m just gonna hit them in the top of the head and make ’em go in reverse.

Brendan Francis Newnam: Some of my favorite moments in the special are right after you do an impersonation of a crazy person — who’s occasionally your ex-wife — you play a calm serious person, and it reminded me of like the typical radio voice and delivery?  So I was wondering if you could give me a radio voice “out.” Like your impersonation.

“Well you heard it here first, Kevin Heart’s ‘Let Me Explain’ in theaters July 3, Gonna be epic. Kevin, I just wanna tell you congratulations, and we’re looking forward to seeing you do what no one else has done — wow. All right, coming up next you’re gonna hear a hot song on the one-and-one played on the two-and-two!”

Brendan Francis Newnam: Couldn’t have done it better myself.