A lot of us grew up with the late, masterful comedian George Carlin, but Kelly Carlin really grew up with him. The late comic’s daughter – now a performer herself – has written a new memoir called “A Carlin Home Companion” (we enjoy the public radio nod). The book was was inspired by Kelly’s critically acclaimed one-woman show of the same name, and it delves into Kelly’s unconventional upbringing, her parents’ roller-coaster relationship, and her search for her own voice.

Kelly shares an excerpt from the book about a time when her father insisted that the world was about to end…or as she told us, “A little story that we used to like to tell at cocktail parties.” 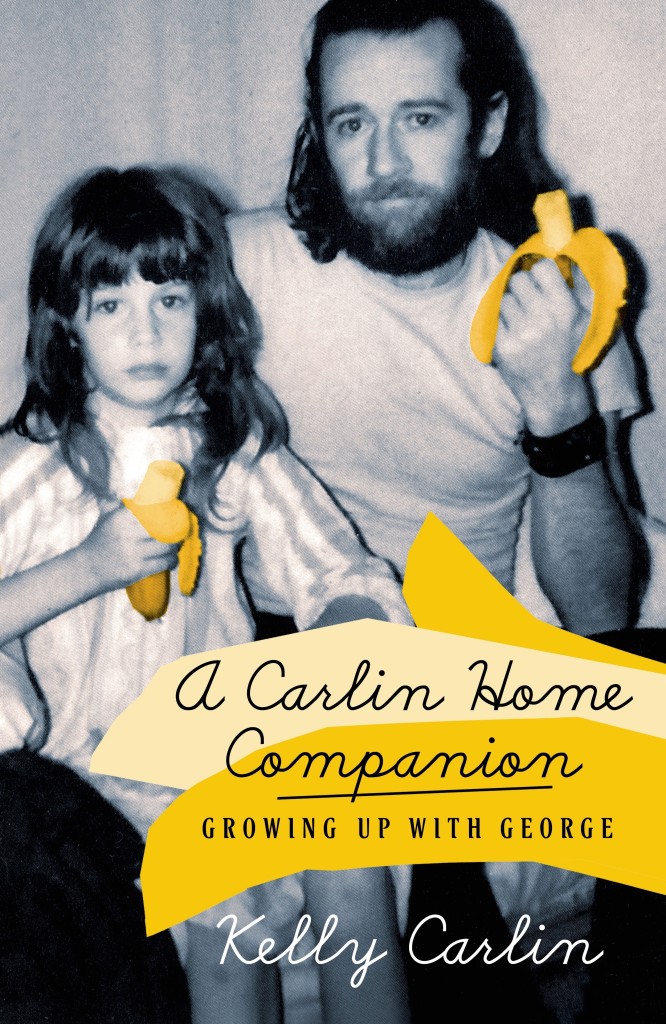 Around 11 AM the day after we got home from Hawaii, my dad rushed into my room and woke me up with the words, “Kelly, I have something important to tell you.” Now, these words scared the shit out of me because I was sure that he was going to tell me that he was finally leaving my mom. I knew in my heart that it was the only thing that might finally make my mom get some help for her drinking, and so I was ready for it. I sat up in bed and braced myself for the blow of the news, when he said, “Kelly, the sun has exploded and we have eight, no… seven and a half minutes to live.”

“What?” I asked, trying to take in this new information.

I knew my father had been doing a lot of cocaine, and God knows what other assorted chemicals in Hawaii, so I thought he was probably just freaking out or something. But he was my dad, and no matter how messed up he was, he was still my dad, and so I got out of bed and went to have a look.

My parents had very thick curtains in their bedroom to block out the mid-day sun so we slowly parted them and made our way through the curtains to the backyard. When we got outside, the sun was blinding. You couldn’t even open your eyes. It was too painful to even squint them open. We were like some mole family suddenly thrown into the mid-day sun. I thought–My God, I can’t see! My God, what if he’s right? My God, are we going to die? I didn’t really think so. At least I didn’t hope so. What I was hoping was that there was a very reasonable explanation. I offered up a few: “Maybe it’s the smog? Or maybe it’s just that LA sun is different from Hawaii sun?”

And then my mother chimed in, “Maybe it’s the fact that you haven’t slept for more than four fucking hours in the last three weeks?” She did have a point.

Contrary to how it may have seemed at the moment, my dad was a very rational man. He decided that he needed to check and see if this phenomenon was happening anywhere else on the planet. As he paced in the bedroom, he explained, “We could call Doc in New York, but New York is three hours later which might mean that the effects of the sun exploding wouldn’t be so prominent on the East coast. No, we need someone on this coast! I’m calling Joe.”

So, dad called his old friend Joe Belardino in Sacramento. I sat on the edge of my parent’s bed tensely listening as dad hurriedly explained to Joe what was going on. “Joe, it’s George…I need you to do me a favor…Well, I need you to go outside and check and see if the sun is okay…Yeah, I think it may have exploded…Yeah, yeah, I know…Um, do you think you could you go now? I don’t think we have much time.”

With a look of hope on his face, Dad covered the mouthpiece and said, “He’s checking.”

Now, here was the moment of truth for me: Either the news was bad, and the sun had definitely exploded, but my dad was a genius for being able to calculate something that involved the speed of light! Or the news was good, and the sun hadn’t exploded, but my dad had completely lost his mind to drugs confirming, once again, that the only sane and rational person in this household was an eleven-year old girl who wanted donuts for dinner.

And just like all the other weird shit that made up my daily life, I could not talk about this with anyone, anywhere–especially at school. When I returned to school after the Hawaii trip, the day after the sun had not exploded, my teacher asked, “So Kelly, how was your Easter vacation?”

Mustering a look of complete neutrality I said, “It was…good. Fine. It was fine.”