Actor Joseph Gordon-Levitt is best-known for starring in hit films like “Looper,” “Inception,” and “(500) Days of Summer.” He is also the creative force behind an unusual show for the cable channel Pivot, called “HITRECORD ON TV.”

Every episode features a bunch of segments exploring a theme. The show is largely produced by an online community of people he has never met in person. Through his web-based “open collaborative production company,” hitRECord, Levitt and other artists propose segment ideas, to which anyone can contribute audio, video, music, writing, or other work. Then Levitt and his crew curate and weave together the contributions into a high-speed variety show. A box set of the first season just came out.

Rico Gagliano: Why would a guy who works with the best artists in Hollywood want to collaborate with total strangers?

Joseph Gordon-Levitt: The truth is, I think there are tons of great artists all over the world that don’t necessarily have the opportunity to be here in Hollywood. You know, the established entertainment industry is sort of an exclusive clique. I’m very, very fortunate to get to work inside of that clique, but that doesn’t mean that there’s not lots of other people that I want to work with. 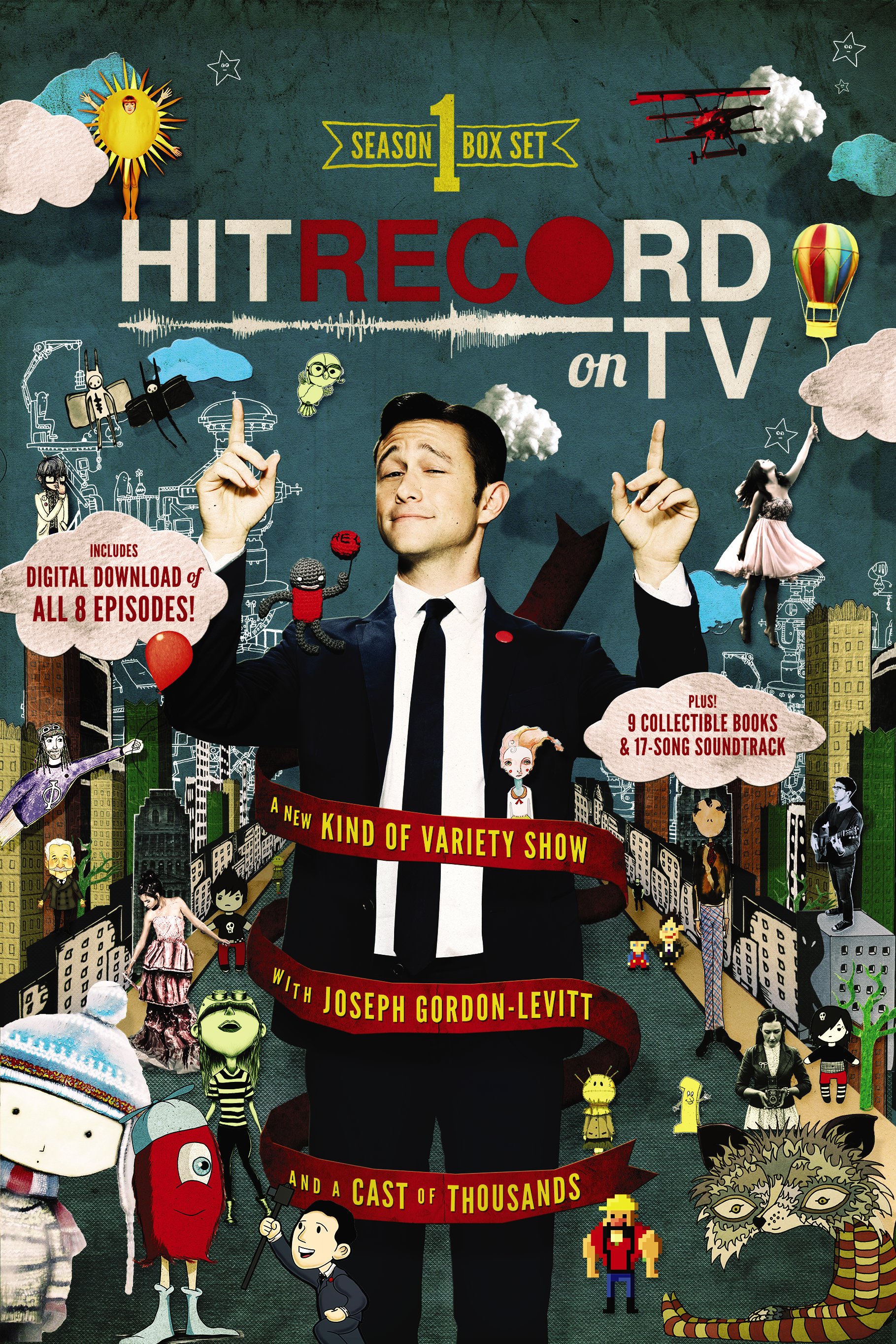 Rico Gagliano: A lot of other people. Let me take an example. There’s this guy, Saint Maker, I believe his name is? He’s an older gentleman, first of all. He’s not the kind of person you would expect to collaborate on this. He’s got, like, a beard and lives in Texas.

Joseph Gordon-Levitt: You’re right. he’s a great writer. Actually, his primary contributions are writing. He’s called Saint Maker, there’s a little piece where he explained his name on the episode regarding trash. He digs through trash and he makes these sculptures of saints. You know, so that’s like, thirty seconds on the show, just this guy who’s like, “Oh, I’ll tell you what trash means to me.”

Rico Gagliano: What do you think his motivation is for being on this show? And, broadening that out, have you found that there is kind of a common thing that unites the people who really want to contribute to this?

Joseph Gordon-Levitt: Sure. Well, the name of it, hitRECord, is sort of a turn of phrase that I started saying to myself, ten years ago now. It was at a time in my life when, you know, I grew up working as an actor when I was a kid, and then I quit for a couple years, went to college, and then when I wanted to start up again, I couldn’t get a job. It was depressing. But I realized, and I think this is something a lot of actors go though, when you’re an actor, you have to wait for someone to give you a job before you can do your art. I realized then that wasn’t going to work for me. I couldn’t be relying on other people, and so the record button became this sort of symbol for me. The red circle.

Joseph Gordon-Levitt: Exactly! It’s just like Nike. But that’s exactly it. Getting started, that’s the hardest part. Pushing the button. Because you have all these voices in your head saying, like, “No, you’re not an artist. What do you have to contribute?”

Rico Gagliano: You think that the people who are contributing, they’re kind of people that have been in a similar position, maybe?

Joseph Gordon-Levitt: Yes. To answer your question specifically, that’s exactly it. I think that most people that come to our site are people that want to make stuff and want to be a part of a community of other people who are encouraging them to do that. Oftentimes on the internet, it’s more a culture of “Look at me! Look at me! My thing! My thing!” and it’s competitive.

Rico Gagliano: There is something, though, the filp-side of this, that I can imagine, is that it must be really tough for you, given what you just said, I mean, if you’ve got someone in this community who is there because they want to express themselves and get out there and collaborate, but they keep contributing and it’s just not good, what do you do?

Joseph Gordon-Levitt: That’s a great question. The truth is, and this is honest, the people who are really dedicated and contribute often, get on the show. They generally do. We make so many requests and there is a real wide range of skill level required. Some of the requests just require you to, you know, talk into your webcam and give us your own unique insight.

Joseph Gordon-Levitt: I’m sure there is. I’m sure there is and, do I feel for that person? Of course! I also, though, you know, it’s an interesting blend. In one way, the way we are making our show is really different than conventional show-business. In another, it’s very much built on conventional show-business. That’s what I grew up in. I grew up going to audition after audition after audition.

Rico Gagliano: Did that kind of blow your mind? Like, “Even though I’m trying to get away from the Hollywood thing, there is an actual underlying system that makes sense”?

Joseph Gordon-Levitt: That works! Absolutely! I love working on movies. How I try to direct hitRECord is based on what I’ve seen. I just got to work with Robert Zemeckis and he’s enormously collaborative. He will oftentimes, when we’re starting to work out a scene — I like this phrasing, actually, that he’ll use — he’ll say, “Here’s what I know. I know the scene has to start this way and the camera has to start here…” blah-blah-blah-blah-blah, and then he’ll say, “Here’s what I don’t know.” People will start throwing in their two cents.

Rico Gagliano: Something interesting, I was talking to a guy from the Online News Association, and he specifically mentioned hitRECord’s website as an example of an online community that is somehow magically without trolls? For those who don’t know, those would be people who are negative commenters and, I mean, are you actually policing comments or is this a naturally-occurring phenomenon? Why?

Joseph Gordon-Levitt: We don’t police or, like, delete anybody’s comments. Yeah. So why don’t people do that? I don’t know. It would be like walking into a kindergarten class and being a dick, you know? Who would do that? I don’t even think it would be satisfying.

I think part of the reason that trolls can be troll-ish is because they know they are in the company of other trolls. So, they’re comfy on YouTube.

Rico Gagliano: The opening shot of the opening episode is you coming out on stage, you have a camera with you, you shoot yourself, you shoot the audience. The audience is encouraged to take out thier cell phones and shoot each other. There are cameras in the audience, everybody’s pointing cameras at each other. I can almost guarantee you that an older person looks at that like this is the end of culture. Everybody shooting like selfie-culture, you know? Defend it.

Joseph Gordon-Levitt: My defense would be that, back hundreds of years ago, not everyone was literate. In fact, a small minority of people could read and write. I would argue that it’s much better if everybody can read and write, because reading and writing is a huge part of being a modern human being and being able to express yourself. Nowadays, it is additional technologies that allow us to express ourselves and they have to do with these electronic devices. Cameras and microphones and internet connections. Everyone should and can use them and it is good that they use them.

I agree that there is plenty of narcissistic, superficial nonsense that goes on on various social networks. But, I don’t know. Like, I had this conversation with my mom. We were actually talking about a movie that I made, “Don Jon,” and there’s a point in the story where a guy uses Facebook to find a girl. And I was saying to her, “Isn’t it problematic that, on Facebook, people quantify thier relationships?” You’re either single or you’re with someone or whatever, and it’s all quantified, and isn’t that a problem?

My mom’s response was, “It was always that way.” It was very clearly defined. You were going steady or you weren’t going steady. It was just as quantified. The shortcomings that ‘selfie-culture’ makes evident, have always been there — but the opportunities that new communication technology offers means that more and more of our society can express themselves, and the more perspectives that are expressed, the better.