Joan Didion has always been at the top of Brendan’s list of dream dinner party guests. A new biography about her called “The Last Love Song” has just come out. While reading it around the office, he was surprised to discover how many people weren’t familiar with Didion. So when he met with the book’s author, Tracy Daugherty, Brendan asked him how he described her to the uninitiated.

Tracy Daugherty: She began in the late 1950s and early 1960s as a magazine writer and a journalist, and I think really broke in the late ’60s with some personal essays that were collected in a book called, “Slouching Towards Bethlehem.” They were very jazzy, fragmented pieces that I think captured the crazy feel of the time, the turbulence of the 1960s. It was a kind of music in her prose that really appealed to a lot of people. So she became kind of infamous. 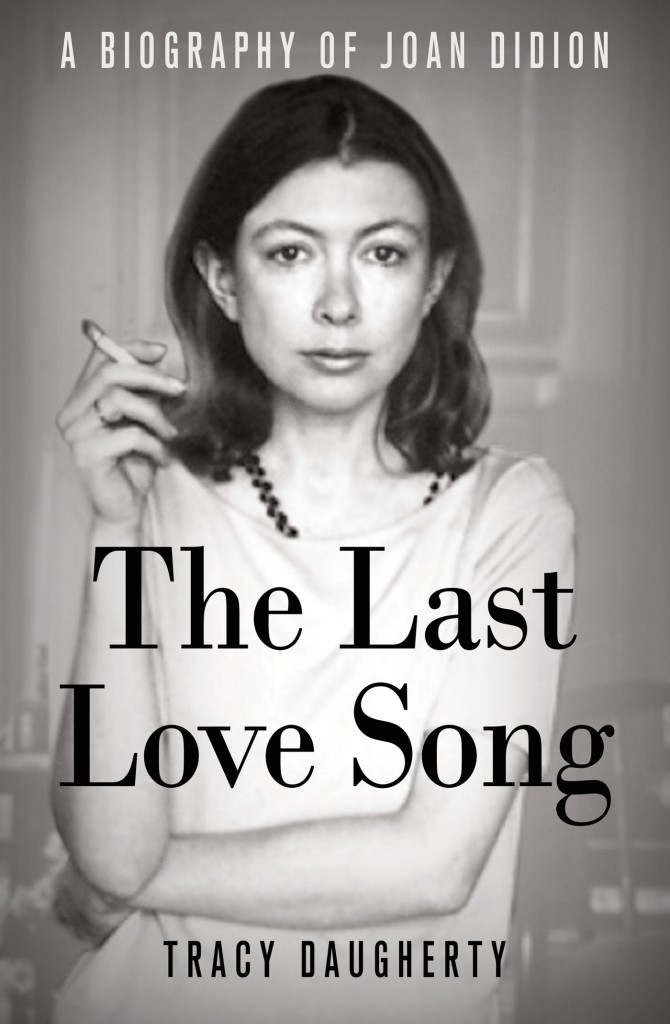 Brendan Francis Newnam: This book is about her writing. It doesn’t contain her writing, but I’m wondering if you could share a snippet of some of her writing from your book so people get a sense of how her writing works.

Tracy Daugherty: Sure. This is from her essay, “Some Dreamers of the Golden Dream,” describing a day in California, which is beautiful, but also has a kind of undertow of doom to it. So this is kind of typical Didion:

“[It] was a bright warm day in Southern California, the kind of day when Catalina floats on the Pacific horizon and the air smells of orange blossoms.

A 70-year-old pensioner driver his station wagon at five miles per hour past three Gardena polka parlors and emptied three pistols and a 12-gauge shotgun through their windows, wounding 29 people. ‘Many young women became prostitutes just to have enough money to play cards,’ he explained in a note. Mrs. Nick Adams said that she was ‘not surprised’ to hear her husband announce his divorce plans on the Les Crane show, and, farther north, a 16-year-old jumped off the Golden Gate Bridge and lived.“

Brendan Francis Newnam: It’s really evocative, and I love your follow up to that is, “Oh, that kind of day.”

Brendan Francis Newnam: With “that” italicized.

Tracy Daugherty: What’s great about her — and I think this does kind of get to the heart of much of her writing — is that all of those incidents are not really connected. They’re quite random. You can pick them out of a newspaper, and yet she combines them in such a way that they begin not to seem random. They seem connected and they seem to portend that something awful is going to happen. And that’s just a brilliant prose style.

Brendan Francis Newnam: So clearly there’s a literary sensibility at work in that writing. And that, as well as incorporating personal details and a point of view, are some of the things that distinguish new journalism…

Brendan Francis Newnam: …Which is a type of journalism that Didion created along with Thomas Wolfe and Norman Mailer and others. How did she end up in a position to practice this sort of writing?

Tracy Daugherty: In many ways she stumbled in to new journalism. She began writing for Vogue magazine. They would assign her some topics like, “Write about morality,” or, “Write about marriage and friendship.” And she took a very personal approach to it and stuck herself into the stories.

So then later, when she began to cover more public events like politics and social unrest, she continued to insert herself into the story in a very personal way and that was a kind of a unique form of journalism.

So as you say, along with Tom Wolfe and Norman Mailer and many others, she kind of pioneered this new form of subjective journalism. She says, “There’s no such thing as objectivity unless you know where the storyteller stands, you can’t really know how the story is being told.”

Brendan Francis Newnam: Which sets up an interesting challenge for a biographer because in a way she’s already revealing who she is and some of the intimate details of her life, her migraines, her drinking, her marital woes. These are often the things a biographer kind of brings to light.

Brendan Francis Newnam: As a biographer, your job was what? To kind of verify this information and talk about the context that surrounded her sharing that information?

Tracy Daugherty: Initially, I thought that my job would be to try to either confirm or deny the stories she told about herself, but as I got into the project, I realized that she’s a candid writer, but she’s not really a confessional writer. She chooses what to put in and what to leave out.

So, as she seems to be revealing a great deal about herself, she’s actually withholding things. And so I began to think that my job really was to try to think about Joan Didion in her cultural context.

Brendan Francis Newnam: So along with including personal details, new journalism allowed the author to incorporate points of view. Didion certainly had a point of view, and it often ran counter to what she was covering and the culture, be it hippies in the ’60s or the Reagans in the ’80s. What would you say her point of view was?

Tracy Daugherty: She’s often talked about as someone who went from being a political conservative to becoming a political liberal, but I think that’s too reductive.

I don’t think she’s ever been a very ideological writer. I think her point of view and her politics really boiled down to just wanting people to be honest and principled — whatever their political viewpoint — as long as they’re authentic and principled, she’s OK with that. And if they are not, she will go after them.

Brendan Francis Newnam: There’s also, in her writing, and I guess I’m thinking of “Slouching Towards Bethlehem,” non-fiction essays written about Haight-Ashbury – the kind of LSD scene in San Francisco.

In that work, she’s writing about what was sexy stuff at the time, like hippies and drugs and… but she’s looking at it through a conservative lens, and I don’t just mean that politically. She seems almost disgusted by the recklessness and the blind romanticism that was part of that scene-

Tracy Daugherty: Exactly. I think that’s what made her seem so fresh, is she was writing about sexy topics, but as you say, she was taking a different stance than many other journalists of the time were.

When Tom Wolfe, for example, wrote about the LSD culture and Ken Kesey, Tom Wolfe even dropped acid just to have the experience. He wanted to be part of it. Didion never went that far. She inserted herself into the story, but she never wanted to participate. She was always on the periphery looking at it slightly askance. Her prose took on the sexiness, the jazziness, the fragmented quality, but her point of view was, “Let’s be a little slower to accept this.”

Tracy Daugherty: It is amazing, her celebrity.

Brendan Francis Newnam: Yeah, she’s 80 now and this year she modeled for Celiene, a kind of hip fashion line. It’s hard to scroll through Instagram without encountering a cool image of her from the ’60s. What do you think accounts for her current popularity?

Tracy Daugherty: Well, in some ways, her prose style may have been tailor-made for the internet era. Writing in a kind of fragmented, illusive style that, at the time, seemed kind of hard to grasp. Nowadays, with our short attention spans and our desire to jump from link to link, we’re learning to read in different ways, and this kind of style fits right into it.

Brendan Francis Newnam: That’s interesting. I would also add that her kind of dark view of the world, I feel like that resonates with the modern audience.

Brendan Francis Newnam: Then if you Google search “Joan Didion,” you’ll see very cool photos of her. She’s this beautiful woman. She has a beautiful husband. They’re both stylish. They’re often smoking cigarettes in these cool surroundings in L.A. It’s like she herself is a fictional character from Hollywood.

Tracy Daugherty: Oh, I think that’s a great point. Yeah. She’s got it all. She’s got the glamour and she’s also got the doom. And so it fits the age.