Actor James McAvoy won acclaim for his work in “Atonement” and “The Last King of Scotland,” and landed the recurring role of a young Professor X in the “X-Men” movie franchise (the most recent — “X-Men: Days of Future Past” — is out now).

But the busy Scot plays a not-so-super figure in “Filth,” the film adaptation of Irvine Welsh’s unsettling novel.  The role won him a British Independent Film Award and it opens in the U.S. May 30th.   He ushers us into the film’s dark spaces, then flies his country’s flag.

Rico Gagliano: James, it is a pleasure.

James McAvoy: Thank you very much, thanks for a lovely introduction as well.

Rico Gagliano: You know, you earned it, man.

Rico Gagliano: You did it, you’re on our show! Now, I should say, first off, that “Filth” is is not a ‘family film’. It is about a deeply corrupt cop. His name is Bruce. He’s vying for a promotion. His life is unraveling. He’s killing the pain by indulging in every cruelty and vice imaginable: drugs, drinking, sex addiction, a certain amount of misogyny.

Your performance starts at pretty much a fever pitch, and it doesn’t let up for most of the film. Tell me what was happening on set before the camera rolled, before some of the more frenzied scenes. What were you doing to jack yourself up like that?

James McAvoy: Do you know what, man? Not a lot. 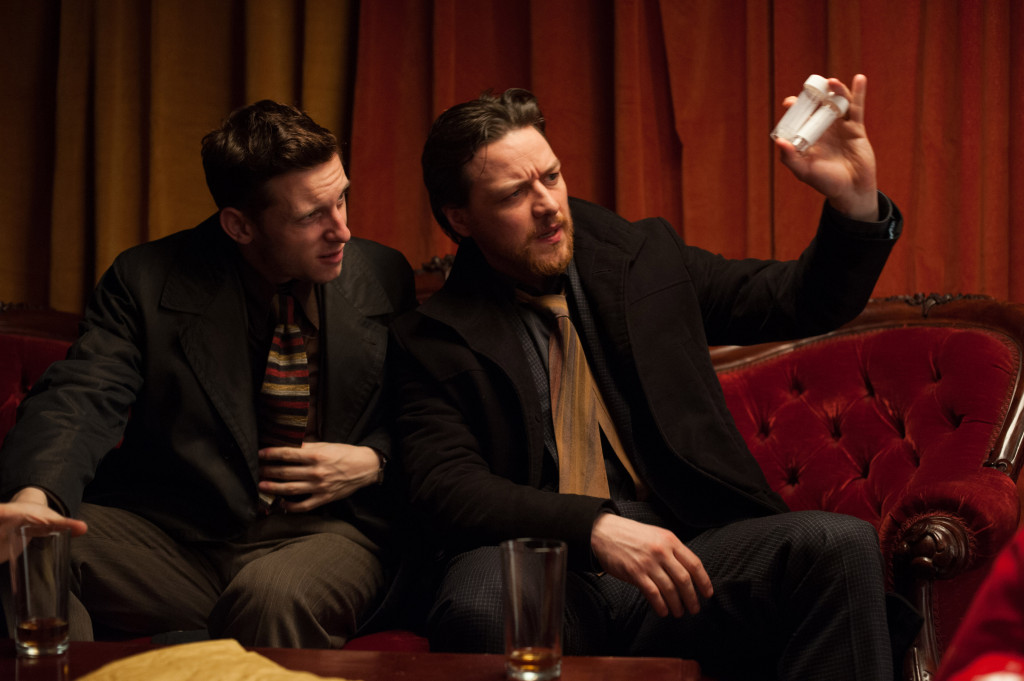 James McAvoy: It’s strange, it’s strange. I’m really unlikely casting for this role, I appreciate that, and people wouldn’t necessarily think that I’m like this — and I’m not.  But this fell out of me so much easier than other parts that I’ve played that apparently seemed like easier roles, you know.

Rico Gagliano: But seriously, you went from zero to that? The cameras roll and you just turned it on like a switch?

James McAvoy: I think it was like that, a little bit. You know, it’s like… you know when you tell a story in the pub.  Before you tell the story you’re not spending ten minutes going like, “Right, I’m gonna get psyched up to tell a story.” You just tell the story.  Because you have a need.  You have a need to impart the desperate nature of some horrible situation that happened to you, or some funny thing that’s happened to you. You have a need to tell it. And it’s the same with acting or filmmaking for me. I needed to tell that story, I really wanted to tell that story. Nine times out of ten, if it’s written well and I really wanna tell it, I don’t need to spend ten minutes convincing myself that I want to tell that story, do you know what I mean?

Rico Gagliano: What attracted you to telling this particular story? It sounds like you had a very personal connection to it.

James McAvoy: Yeah. I mean, you know, it’s about a very abusive, manipulative, abhorrent character, who does all the worst possible things — quite in the vein of somebody like Iago, or Atreus, or Richard III or something like that.  And that’s fun. So that’s one of the attractions.

Rico Gagliano: It’s fun being a character that’s that kind of over the top?

James McAvoy: Yeah, that’s that bad. You know historically, we love characters that abuse people, as long as they’re sort of doing it covertly, and give a nudge and a wink to the audience and let them in on it. We seem to love that. What generally you need to do beyond that – because I think audiences would get tired of that quite quickly… and I was getting tired of that in the script, until about page thirty. I was like, “Right, I’m ready for something more.”  And as soon as I turned the page, I got something more: You start to realize that his behavior is basically a symptom of his mental illness.

Rico Gagliano: What’s the personal connection to that?

James McAvoy: Well, I suppose, you know… you tell me that you’re gonna make a British movie about a policeman — a working class guy who’s got alcohol and drug problems and who’s mentally ill — I’d probably think it’s gonna be like a black and white, gritty, social commentary drama, know what I mean? It would be very worthy, with a point to say about the state of mental health care issues in Great Britain.  And that’s not this film at all.

For me, it’s a film that represents what it’s like to be inside this guy’s head. It’s vibrant, energetic, at times entertaining, and sometimes totally offensive. For me, it’s a more sort of surreal, interesting, artistic depiction of somebody with mental health problems.  Because I’ve got quite a lot of experience with mental health problems in my life, and the director did as well, and we were both just really excited about not doing something ‘worthy’ with it, but doing something energetic with it.

Rico Gagliano: Was there some worry that went with that too? I mean, because it’s a blackly funny movie, if it doesn’t strike exactly the right tone, it can come off as reveling in the behavior it’s lamenting.

James McAvoy: To be perfectly honest with you, there have been lots of people who think that. There will be more people who think that. I wasn’t worried about all of that.  I mean there’s a certain part of you that goes like, “This is a bold undertaking, it’s going to take quite a lot of delicate finessing in terms of how we push the audience away from us, but then how we also draw them back in, and make them feel empathy for somebody who they have condemned in the first five minutes.”

So I knew that that was difficult, and I was not entirely certain that we would be able to pull it off. But I thought even if we fail, it’s worthwhile doing, because it’s the best script that I’ve ever read as well. So regardless of how it turned out, I had to get involved.

Rico Gagliano: To call this guy a ‘rogue’ isn’t going nearly far enough, but there is a little similarity between him and the young Professor X in “X-Men.” That character isn’t yet the wise, peaceful character that he’ll grow up to be. He’s kind of this sex and ego-driven guy. But then, in “Atonement,” you’re this lovelorn paragon of virtue. Which do you prefer? You mentioned before the joy of playing a Richard III type…

James McAvoy: You know, I think somebody like Robbie in “Atonement”… I loved Robbie, and I still love him, but he’s sort of not really a human being. The director quite often talked about him as like Christ, almost. He was so sort of unrealistic in his ability to suffer, you know?  He was sort of otherworldly.

Rico Gagliano: So, more of this in the future, you think, for you?

James McAvoy: Well, I suppose so. I’ve just finished one: I played Dr. Victor von Frankenstein. You know, his story is all about obsession, and ego, and supplanting god. There’s a lot of similarities there, actually! There’re certainly mental problems with ol’ Doctor Vic!

James McAvoy: Yeah, I know!  But honest to God, it’s the work that comes my way at the moment. I’ve not been looking for it.

Rico Gagliano: Does it interest you that maybe people are starting to cast you that way? Do you go, “Hey, wait a second:  y’know, I am a sane gentleman”?

James McAvoy: [Laughs] No, I like it. I mean, the two characters that I’ve played that I’ll miss playing the most are Macbeth, and Bruce in “Filth.”  Not because they’re both Scottish, but because they’re both so complex, and so much victims of the world. It just shows you how corrupting the world can be, that it can create these monsters.

Rico Gagliano: We ask two questions of everyone on this show, and the first one is: What question, if we were to meet you at a dinner party, would you least like to be asked?

James McAvoy: Oh, I know. Probably, “Were those your legs in Narnia?   or was it CGI?”

Rico Gagliano: Oh, that’s right, you played Mr. Tumnus in “The Chronicles of Narnia,” who is a half-man, half-goat.

Rico Gagliano: They’re asking if those were your actual goat legs?

James McAvoy: Yeah. People were, like, “How did you do that?  Were those your own legs?”

Rico Gagliano: What is wrong with people? That’s insane.

Rico Gagliano: All right. I hope you just hike your pants up and go, “Nope.”

Our last question is: Tell us something we don’t know.  And this can be about yourself, or about anything in the world. It could be like a piece of trivia, an anecdote…

James McAvoy: Okay: The Thermos flask, television, and telephones all came from Scotland.

James McAvoy: The Thermos flask — like a flask that keeps things hot — television, and the telephone all came from Scotland.

Rico Gagliano: All right, I’m gonna check on all of those, because I can imagine you might have a lot of national pride and would lie to me — but it does make sense; a thermos often has that tartan exterior.

Rico Gagliano: Is that why?!

James McAvoy: I don’t know!  But it’s a Scottish invention. Very proud of that.