The incomparable Jackie Collins has penned twenty-nine bestselling novels, selling over 500 million books in the process. Her latest is a cookbook, themed after her popular heroine — mob daughter Lucky Santangelo. But most impressively she regularly appears on our show to dispense etiquette advice… so at our recent show in Santa Monica we invited her to do it again, live. In her classic style, she advised the crowd about how to politely negotiate office buffet lines, requests from friends for airport rides… and of course, secret dalliances.

Joining her on stage was our guest of honor that evening, “Mad Men” actor Rich Sommer — who ended up learning a little something about his co-star, Elisabeth Moss.

Jackie Collins: It’s so good to be here.

Brendan Francis Newnam: So, for those who aren’t familiar, tell us about Lucky Santangelo. 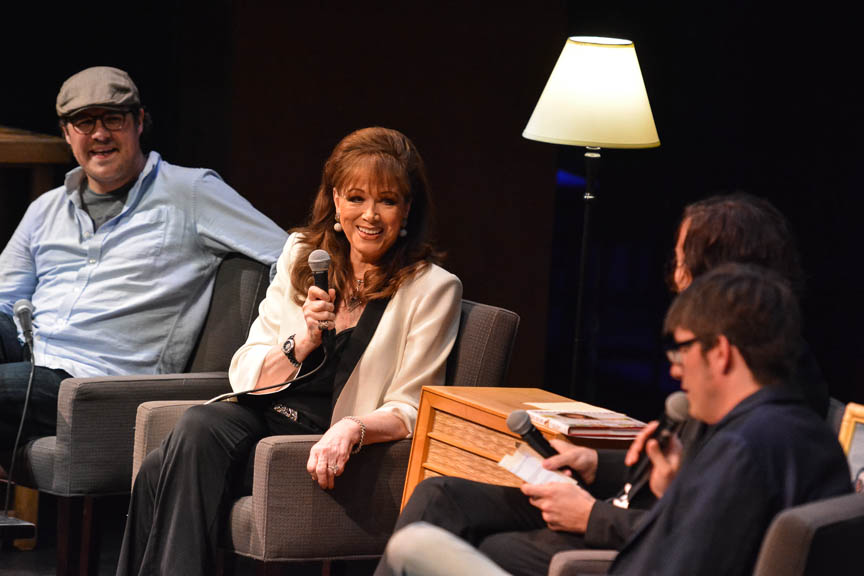 Jackie Collins: She’s a character that I’ve written about in seven books and ten hours of prime time NBC television. And she’s a great character, ladies, because she’s a strong, very positive woman. And when I was a kid growing up, the women were doing nothing. They were in the bedroom or the kitchen. So, it was sex or cooking and that was it. So I wanted to create a really strong heroine who could kick some ass.

Rico Gagliano: And now you can put out the cookbook.

Brendan Francis Newnam: You said that about “50 Shades of Grey” — you said, “I want a woman who kicks ass instead of getting her ass kicked,” I think.

Rico Gagliano: There are some who would say a cookbook is an odd choice for you. It’s not the first thing that comes to mind. But it’s our understanding — and tell us if our research is wrong — but you actually cooked for your kids every day when they were growing up.

Jackie Collins: Yes, I have three daughters who are all strong women. Well… I don’t cook every day. I cook at Christmas. I cooked for 40 people —

Rico Gagliano: Well, every day is Christmas at your house.

Jackie Collins: — For Christmas, I cooked for 40 people all by myself. So that was fun. No, but there’s a lot of good recipes in the book —

Jackie Collins: You know, I call it “decadent and delicious” because so many cookbooks are so bloody healthy. You know what I mean? You may as well have fun if you’re going to cook and be in the kitchen.

Jackie Collins: You know, you want to hear a bit of trivia? [“Mad Men’s”] Elizabeth Moss was in my mini-series “Lucky Chances,” and she played Lucky as a five year-old.

Jackie Collins: Yeah. Yeah. She sat by the pool and screamed as she found her mother’s body lying floating!

Rich Sommer: That’s where it began.

Brendan Francis Newnam: Well, you have a job to do here. You’re here to answer our audience’s etiquette questions. We told folks tonight to submit their questions. We’ve selected them and let them know.

Rico Gagliano: The first one is Chris Conway. Is Chris Conway out there? Chris, how you doing? You got the mic? 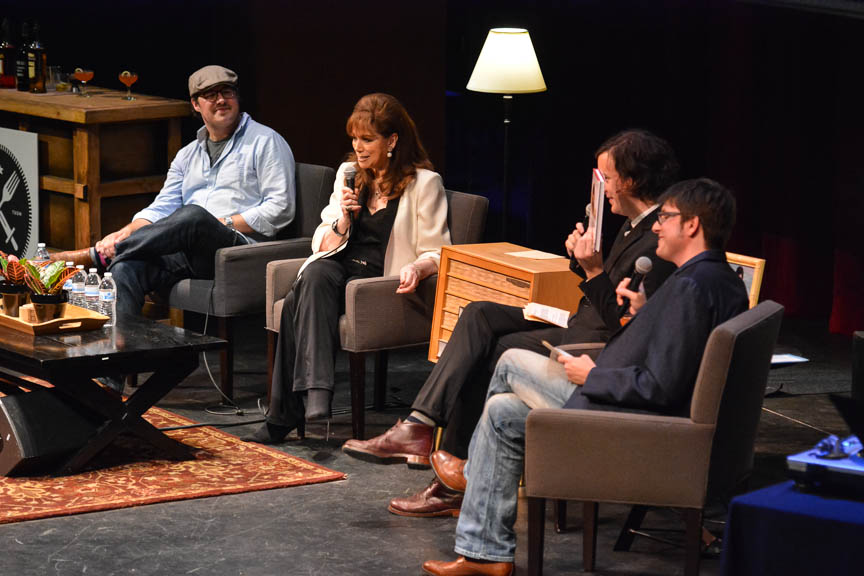 Rico Gagliano: Oh, good — because we’re about to embarrass you terribly.

Chris Conway: This question is about buffets. The question is: if there’s a party, like a work party for example, and you know there’s going to be a buffet, and you’re super jazzed about the food, and you show up early… are you allowed to go back for seconds before all of your coworkers have arrived?

Jackie Collins: No. It’s totally greedy. I mean, I always try to get to the buffet line first anyway, but you have to be polite and wait until everybody’s got their food.  And then you can, like, go back and clear up.

Rico Gagliano: But he arrived first! He was the best guest — he showed up right on time and everybody else kind of blew it off.

Rich Sommer: Well, so he gets first swing at second round.

Brendan Francis Newnam: Not to give stuff away, but Chris’s email address was from UCLA. So, you’re a student, Chris? You’re a starving student?

Rico Gagliano: Oh — that’s a little less OK. You can get a grant to eat. But if you’re undergrad, then just eat as much as you possibly can.

Brendan Francis Newnam: Maybe Jackie will invite you over for Christmas.

Jackie Collins: I don’t think so, no.

Rico Gagliano: Now we’re looking for a Katie Burbank.  A woman named after an entire section of town — because she’s so exciting, I’m guessing. Hello Katie!

Katie Burbank: How do you politely decline a request for a ride to or from the airport?

Jackie Collins: Well, you know, they’re getting a train that’s going to go straight to the airport. They’re building it now.

Katie Burbank: So, until then?

Jackie Collins: You’ll have to say, “I’m so sorry. I would really love to take you to the airport, but, you know, my brother just got engaged and I have to go over to their house to celebrate.”

Katie Burbank: Good one. What if you don’t have a brother?

Jackie Collins: Well, if you don’t have a brother, make it a cousin. Everybody has cousins!

Brendan Francis Newnam:  You could just say: “You know, they’re building a train to the airport.”

Katie Burbank: I’ll definitely lead with that next time.

Rico Gagliano: It is true, though — in L.A., you’re really putting somebody on the spot. Because you know the answer is, “No, I don’t want to take you to the airport!  Because I freaking hate that airport!”

Brendan Francis Newnam: [to Rico] I thought your cousin was engaged! I’m learning so much tonight.

All right, Katie, that’s your answer.

Rico Gagliano: Does that answer your question?

Katie Burbank: Yeah, I can use either of those.

Rico Gagliano: Cousin it up.

Rico Gagliano: …Somebody get that man a mic.

Manuel Guzman: You can just go ahead and read it.

Brendan Francis Newnam: You want us to read it? OK. This is a good question.

Rico Gagliano: All right. Here we go. It is:

“If you arrive at a dinner party with your spouse or significant other, and you spot somebody with whom you’ve previously had a secret liaison… is it poor form to introduce your present companion to the latter?”

That is a man who’s read some Jackie Collins’s books, ladies and gentlemen! Yes!

Jackie Collins: I think, yeah, if you want to make him jealous, then you definitely introduce him.

Jackie Collins: Well, if you’re with somebody that you’re kind of bored with, then you take the secret liaison and you say, “Let’s just catch up.” And you go in the bathroom and you have great sex. And you don’t tell your date!

Jackie Collins: I think that would work.

Brendan Francis Newnam: I like how you ask this question, Manuel. You ask, “Is it poor form?” It was poor form to have a secret liaison in the first place!

Manuel Guzman: Well, you know, things happen in the past.  And a gentleman does have his secrets.

Rico Gagliano: Not any more!

Manuel Guzman: No, no, no, this is strictly hypothetical!

Brendan Francis Newnam: Because this is nationally broadcast.

Rico Gagliano: Yeah. And this isn’t radio. These people can all see you.

Rico Gagliano: All right, so… “have sex.” I think is the answer.

Manuel Guzman: Works for me!