As the general manager of Bestia, one of the hottest spots in Los Angeles, Daniel Flores is used to hearing it’s impossible to get a table to enjoy the restaurant’s lauded Italian fare. Now Bestia has joined Table8, one of a crop of online services that will reserve you a plum last minute table – sometimes for a price. But Mr. Flores also has other tips for those who prefer to get a seat the old fashioned way (and we don’t mean bribing the maître d’.)

Rico Gagliano: How many people a day are asking to get a seat at Bestia?

Daniel Flores: Not as many people are asking as I would like. We’ve been very fortunate to be as busy as we are, but there’s times where we could fit more people.  And I think sometimes people think that we are fully-booked when we might have some seats available.

Rico Gagliano: Really? So how does that work? I mean the reputation of the restaurant is that it’s impossible to get a seat.

Daniel Flores: Well, online reservations are booked a couple months in advance, but if you call the restaurant, there’s often times that we can sneak people in. We also utilize Table8. We’re able to get people in that way as well.

Rico Gagliano: First of all, let me talk about the first thing that you were saying there. So in general, calling the restaurant is maybe a better idea than trying to book online. Why is that?

Daniel Flores: Well, online, everyone is trying to get 8pm on Saturday night. And when they put that in, that’s not available. And it’s not. But if you call the restaurant, we’re gonna say the same thing, “Unfortunately I don’t have a table for four available at 8pm. However, I do have a table at 9:30 or I have a table at 6:15,” and that’s usually the best way to get in. 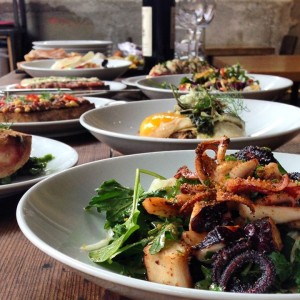 Rico Gagliano: The advantage is that the internet can’t say “however…”

Daniel Flores: Yeah, exactly. I mean, essentially, at a certain point it turns into a bit of a sales technique. You have to explain to people what you do have, and hopefully they’ll be interested in not coming at 7:30 or 8:00.

Rico Gagliano: So that’s the big thing though. The problem is everybody wants to eat at the same time. So you’ve got, you know… this is a big place, there are a lot of employees. They probably have family and guests that they want to get in here. Then, this is Los Angeles where half of the population is a potential VIP with a huge Twitter following, who would be beneficial for you to squeeze in. For those prime seats, how do you prioritize?

Daniel Flores: Well, this is something I always try to make clear to people, and maybe this is something different from a lot of restaurants in L.A., but Chef Ori and Chef Genevieve made it very clear from the beginning of Bestia that they didn’t want to give preferential treatment. All the tables at Bestia are available to the general public. We might try to move things around or squeeze somebody in at times…

Rico Gagliano: Like, add an extra table or something?

Daniel Flores: Yeah, or just… we’ll often book something and then start playing Tetris as the night goes on, and just try to make it happen.

Rico Gagliano: So, basically you’ll book somebody knowing that there isn’t quite enough room, but you know that eventually something will open up.

Daniel Flores: Yeah, there’s a sort of algorithm to seating a restaurant, and you understand that you’re going to have x-amount of people not show up or cancel at the last minute.  And so there’s always a table to be found at some point in the night, and you just have to gamble sometimes. The main thing, though, is that there are no “secret tables” being held aside, for…

Rico Gagliano: There’s no secret panel that slides away and there’s like an entire second restaurant behind that wall there?

Daniel Flores: I mean sometimes I wish there were! I mean, I’ll have friends coming in from out of town, and they’ll want me to get them in, and I’ll say “Sure, I’ll sneak you in.” And basically what that means is getting them a seat at the bar. If I can seat them at a table I will, if there’s a cancellation or a no-show.

Rico Gagliano: That’s interesting. So maybe the first rule of getting a table at a prime time is just showing up, like everything in life.

Daniel Flores: Absolutely. I mean, what people don’t understand about this restaurant and a lot of restaurants is: If you show up and you’re willing to be patient, hang out, and grab a drink, and you’re in good spirits, you’re gonna get sat eventually. Most of the time we’re able to seat walk-ins within 20 or 30 minutes.

Daniel Flores: Yeah, I mean, on a busy Friday or Saturday night there can be waits of up to an hour.  But that’s not the norm.

Rico Gagliano: All right, you mentioned Table8. Apps like this are causing a lot of conversation in the food world: whether it’s cool to basically be adding to what is already… you know, for some people a good, high-quality restaurant is already a little bit of an expensive outing. Now you’re gonna tack on this to it. What is the benefit, first of all, for you guys being part of this thing?

Daniel Flores: The way that it benefits us is that we’re just trying to provide clientele with as many opportunities as they can to come to the restaurant. If you don’t want to sit on hold, and try to call the restaurant, then maybe the service works better for you. The thing that I hear the most about Bestia -besides how amazing the food is – is that it’s impossible to get into.  And we really want to change that perception.

Rico Gagliano: Isn’t that a good perception though?

Daniel Flores: At the beginning. You know, you definitely want to have that mystique.  But once you’ve proven to everyone that you can live up to the hype, you want people to be able to keep coming back. We’re not interested in being the hot restaurant for two or three years. Everyone here is committed to being an institution in this city for a long as we can.

Rico Gagliano: And for that you need regulars who can actually get into the restaurant.

But I want to actually push back a little bit against something that you said. If you’ve got some of these prime seats available on Table8, doesn’t that mean those are not available to a lot of potential regulars?

Daniel Flores: It’s a very small number of reservations that are available through Table8. It’s just another avenue for another type of client to be able to get into the restaurant.

Rico Gagliano: Have you ever just made a mistake, and you’ve got a line of people down the street that can’t get in that thought they could, and they’re… throwing stones through the windows?

Daniel Flores: I don’t want to jinx myself, but I wouldn’t be very good at my job if that happened!