Web series “High Maintenance” has been called, “the greatest show not on television” by Gizmodo. Created by husband-and-wife creative duo Ben Sinclair and Katja Blichfeld, each short episode stars Ben as an unnamed marijuana dealer, which the show uses as a conceit to peek into otherwise-unconnected vignettes of the private lives of New York City dwellers. The stylishly-produced show is by turns silly and poignant, and has attracted an impressive slate of guest stars from fashion designer Rachel Comey to “Downton Abbey” actor Dan Stevens. This month, a new batch of episodes was released, and so we invited the partners — artistic and romantic — behind it to share their list of some other couples who have managed to make great creative work together.

Ben Sinclair: My name is Ben. This is my wife Katja.

Ben Sinclair: Katja and I do everything together. We create this show together. There are those lucky few who get to have the same experience as we have, and we want to point to some of those. So, here’s our list of creative couples who have been able to balance marriage and creativity to great effect.

Katja Blichfeld: The first couple that came to mind was Lucy and Desi Arnez. I am a huge fan of “I Love Lucy”. There’s a lot of passion in that relationship, for better or for worse. I don’t think it’s a secret. I think everyone knows how tumultuous their relationship was, but it was also extremely productive. They made television history. They are sort of the pioneers of the sitcom.

Ben Sinclair: There was even a point where Desi really wanted Lucy to be pregnant on the show.

Ben Sinclair: He wanted to show a pregnant woman.

Katja Blichfeld: That wasn’t something that had previously been done. You couldn’t even say ‘pregnant’.

Ben Sinclair: As a creative couple, I can tell you, for certain, that having just another opinion that you dearly hold onto, without question, is extremely helpful for being creative. Desi said something that was really nice in his autobiography later on. He said “It’s not called “I Love Lucy” for nothing.” 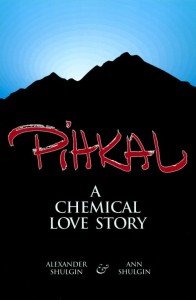 Katja Blichfeld: Thank you. It stands for…

Ben Sinclair: “Phenethylamines I Have Known And Loved”. The first half is “A Chemical Love Story” between Alexander and Ann, and how they came to know one another. The second half is a cookbook full of the psychoactive compounds that Shulgin has developed over his many years in the psychoactive community.

Katja Blichfeld: One thing I like about the first half of the book is, there’s sort of a he-said-she-said element to the way that it’s written.

Ben Sinclair: It resonated with me in terms of our relationship, because they both let each other be themselves. It could easily have been just his chemistry textbook. They chose to make it an emotional book with a story.

Katja Blichfeld: With a human story behind it.

Ben Sinclair: A human story with a core. He was open enough to realize that he had deficiencies in terms of heart and spirit that she was a prime motivator, and it made the work that much better.

Katja Blichfeld: There is a film called “Best Friends.” I think it’s from 1982.

Ben Sinclair: It was written by Barry Levinson and Valerie Curtain, who at the time were a married couple. They were only married seven years, and they actually divorced the year that they film was released. The film stars Goldie Hawn and Burt Reynolds. They start out just a couple, screenwriters, unmarried, but the Burt Reynolds character really wants to get married, and so they elope. And then they go and meet each others’ families for the first time. That proves to be very challenging.

Ben Sinclair: They’re facing a deadline their whole trip, which is basically, the bulk of our relationship is just being somewhere with that…

Katja Blichfeld: Sure, and they called back to L.A. to do some rewrites, and by the time this happens, they’re at each others’ throats. They don’t really want to work together, and their producer basically locks them in a room together and says “finish it”.

Katja Blichfeld: Not to end our list on a down note, but god, there are a lot of ups and downs. I think that seems to be a hallmark of a lot of creative couples.

Ben Sinclair: Even as I was reading about Lucy and Desi today, I was just like, “OK, watch out for this, this and this.”