Herb Alpert has sold over 72 million records around the world (most famously with his band, the Tijuana Brass) since starting his career in 1957, picking up 14 Platinum certifications, 15 Golds, eight Grammy awards, and the National Medal of the Arts along the way. At 78 years old, he is still playing to massive crowds, often along with his wife Lani Hall Alpert, and the pair can be seen this month at The Hollywood Bowl.

As a music legend who has met everyone from Frank Sinatra to President Obama to a whole lot of bullfighters, we thought Mr. Alpert might have some insight into your etiquette questions. His answers might get a little moist.

Brendan Francis Newnam: With the Tijuana Brass he helped shape the sound of the last half century. He’s also the A in the A&M Records label and he produced everyone from The Carpenters to Janet Jackson. He’s had eight Grammy Awards, 14 platinum albums and 15 gold records to his name.  And just this week he was awarded the National Medal of Arts, and Herb welcome.

Herb Alpert: Thanks so much for that introduction.

Brendan Francis Newnam: And you’re not just resting in your laurels. This Wednesday you and your wife, Lani Hall, are playing the Hollywood Bowl, and you’re playing in the same bill as Brazilian band leader Sergio Mendes.

Herb Alpert: Oh, yeah, I love Sergio. If it wasn’t for Sergio I wouldn’t be with my wife Lani.

Herb Alpert: Lani was the lead singer with Sergio in 1966.

Rico Gagliano: What actually attracted you so much to Latin music? Because your background is Eastern-European, right?

Herb Alpert: Well, I’m up for anything that sounds good.

Rico Gagliano: But you had a formative experience at a bull fight, is my understanding?

Herb Alpert: Oh I saw many bull fights. Each year I would go down to Tijuana and I was kind of enamored with that whole event. And also there was this brass band in the stands, a band that would introduce each event in the fights. And I tried to represent that in a song, “The Lonely Bull.”

After that song become a huge hit, I got a letter from this lady in Germany who thanked me for taking her on a vicarious trip to Tijuana. That was a pivotal moment for me because then I realized I want to make visual music.

Brendan Francis Newnam: What year did “The Lonely Bull” come out?

Herb Alpert: That was 1962 and it was the first song that we released on A&M Records.

Rico Gagliano: And you played everything?

Herb Alpert: He was overdubbing his guitar, came up with this kind of luscious sound. I tried doing that in my little studio at home. I had two tape machines, so I went from one tape machine to the other, back and forth, and I came up with the sound that was the genesis of the Tijuana brass sound.

Rico Gagliano: You were doing it with trumpets instead of guitars?

Herb Alpert: Exactly. They first several albums were just me on top of myself. 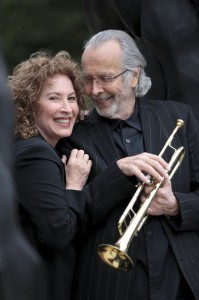 Brendan Francis Newnam: And at that point cloning technology wasn’t at a point where you could clone yourself 10 times?

Herb Alpert: You know in the old days when it was slim pickings and we were trying to get musicians for 10-15 dollars a piece? There was one violin player in town, people used to overdub him like 8-10 times so it sounded like a whole section.

Brendan Francis Newnam: To make a an orchestra.

Rico Gagliano: Well look you’ve navigated countless songs up the charts, let us see if you can help our listeners navigate their etiquette dilemmas, you ready for these?

What’s up with spit valves?

Rico Gagliano: All right. This is from Ron in Sudden Valley, Washington.

He asks, “Can you please rule, once and for all, on the etiquette of spit valves?” Looks to me like that has something to do with trumpets.

Herb Alpert: Well actually, when I started playing … and this is like a whole other area here.

Herb Alpert: And with that sound comes a little spittle and that valve releases the saliva.

Brendan Francis Newnam: That seems like it can get sloppy quick.

Herb Alpert: That definitely is a problem so you look for the closest rug, and if you can’t find that then you do the best you can.

Herb Alpert: You have to find someone to mop it up.

Brendan Francis Newnam: So I guess what we’re learning is there really isn’t etiquette, Ron.

Rico Gagliano: Right, just pay someone to follow you around with a bucket.

Modern art makes me want to rock out

Brendan Francis Newnam: All right. This question comes from JR in L.A.:

JR writes, “Occasionally one of my friends will ask me what I think of pieces in his modern art collection. I get the impression that he wants me to love them. How do I handle this if I’m not of the same mind? He did not make the pieces, he collects them.”

Herb Alpert: Well, I think to really appreciate art you have to stop thinking. You can’t stand in front of a Jackson Pollock painting and try to figure out what he was trying to say. You either feel it or you don’t. And if you don’t feel it, OK too.

Rico Gagliano: And we should say this is an appropriate question for you because you are yourself a modern artist?

Herb Alpert: Well I’m an abstract painter and sculptor. In the 1960s when the Tijuana Brass and I were traveling around the world, I used to go to museums and I’d see a painting that was like a deep black painting with a purple dot, or a purple painting with a black dot, and I’d think like “Wow, let me try that. I think I can handle that one.”

Brendan Francis Newnam: So it sounds like you’re suggesting to just not try to analyze it and just go with your emotions.

Herb Alpert: I think all art is that way. With A&M, there is no way you could talk somebody into liking a particular song. You’d say,”Hey man, this is a hit single,” and you play it for somebody and they’re starting at a wall. But sometimes you need to be exposed to that.

I remember the first time I heard Willie Nelson or Johnny Cash. I’d think “Jeez, that’s a kind of a strange concept,” and then the more I heard them there was something about the intent. If the intent is right and you’re doing it for the right reasons it can resonate.

Rico Gagliano: So the advice for JR, I guess, would be you don’t have to like the art, but keep trying?

Herb Alpert: Well don’t think so hard. Be loose about it.

Baccarat with The Chairman

Brendan Francis Newnam: All right, here’s our final question, we ask this of all our etiquette guests: what was the most memorable get-together you have ever been to. Who, what, where, details please?

Herb Alpert: Well I’ll tell you, I did have a moment with Sinatra actually.

Herb Alpert: Staying at his home and he was to open at Caesars Palace. We flew to Caesars Palace for the opening. After the show he asked me if I wanted to play baccarat with him, and I didn’t know how to play the game. I said “I’ll go with you but I don’t really know how to play.” Within 20 minutes he won around 25,000 dollars.

Herb Alpert: And each time he would go back to his daughter, reel off with thousand dollar bills like boom, boom, boom, and she had this handful that looked like a bowling ball in her hands of hundred dollar bills, and he got up and just kind of left and she looked at me and says, “Herbie, take some of this and go gamble.”

I said, “You want me to take a quarter pound of it or half a pound, what are you talking about?” And so I realized at that point, I want money to mean something to me. I don’t ever want to get in that place where it’s just not important.