Brendan Francis Newnam: Each week, you send in your questions about how to behave. Here to answer them this week is writer Heather Havrilesky. Heather’s sharp, sometimes salty essays and columns have regularly graced the pages of Salon, The Awl, and The New York Times Magazine, among other outlets.

Her popular advice column, Ask Polly, now appears as part of The Cut — that’s New York Magazine’s culture and fashion blog. This year, she’ll release her second book, which you can pre-order now. It’s called, “How to be a Person in the World.” And Heather, welcome.

Heather Havrilesky: Oh, thank you so much for having me. I’m thrilled to be here.

Heather Havrilesky: I’m a behavioral expert, I don’t know if you mentioned that [laughs]. 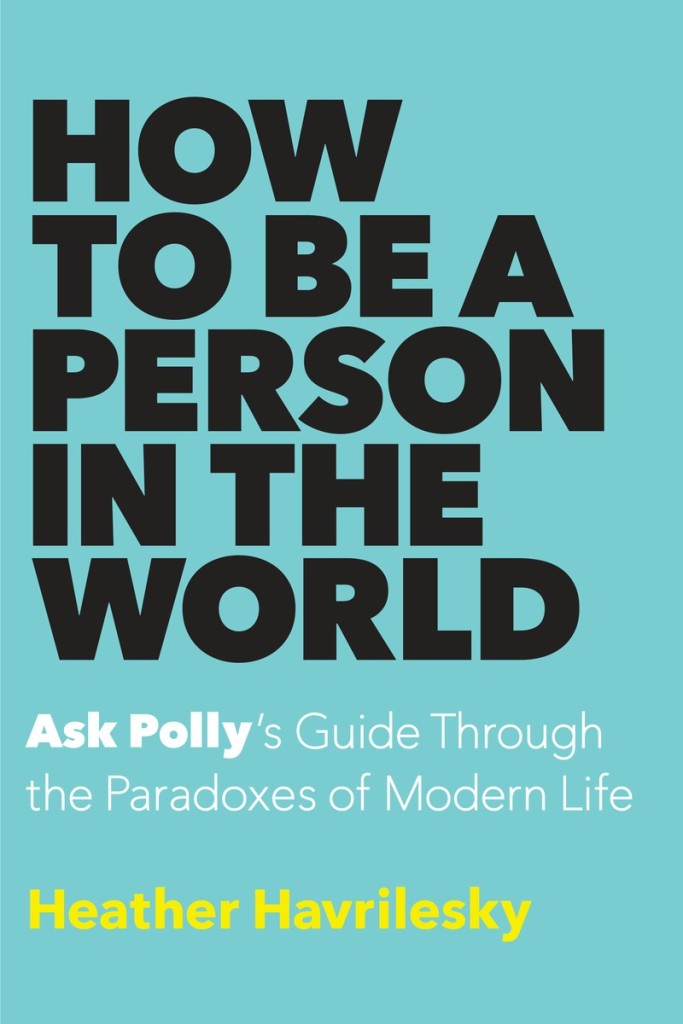 Brendan Francis Newnam: Oh, you are? We were gonna get to that — because your book has a modest title: “How to be a Person in the World.” Just hit us with that. What’s the answer?

Rico Gagliano: That is a great sound bite you just gave us, by the way.

Rico Gagliano: But for those who haven’t read your column, give us an example of the kind of issues you deal with, and how you approach them.

Heather Havrilesky: Well, the column kind of has an existential slant. So, any kind of question that is multi-layered, or pretty complicated, about how to exist. “What am I doing wrong?”

Often, I talk to… [correcting herself] “talk to,” it feels like talking to them because it’s so intimate! Often, I respond to people who are depressed. A lot of my readers are very smart people who are somewhat neurotic, dare I say?

Heather Havrilesky: Yeah [laughs]. And I can relate to these issues.

Brendan Francis Newnam: Wait, did you just call yourself “smart?” I think that’s what just happened.

Heather Havrilesky: Most smart people are at least either a little bit neurotic, or they’re just working very hard to bury their sort of waking, conscious emotions.

Rico Gagliano: I do want to ask, though: What gives you the right? Why should you be telling people how to live their lives?

Heather Havrilesky: That’s a question I ask myself almost every day as I sit down to write advice for people. My best answer is that I have made tons of mistakes over many decades…

Rico Gagliano: “I’ve been there,” kind of, is your attitude.

Heather Havrilesky: Absolutely! And crawled my way up… and I’m still struggling.

You know, I will say I definitely, from the beginning of writing this column, I had a feeling like, “I’ve been a TV critic. I’ve been an essayist. But this is like, the thing I was born to do.”

Heather Havrilesky: Like, I’m just real, really, really good at this. I am.

Brendan Francis Newnam: All right, so let’s see how good you are, Heather Humblelesky.

All the single ladies… need gifts too

This first question comes from Jenny in Los Angeles. And Jenny writes:

“I’m unmarried and don’t have kids, but many of my closest friends do. Toddlers or younger. I spent a small fortune on engagement gifts, baby gifts, wedding shower gifts… and while my friends don’t expect or ask this of me, I admit that I also feel a little obligated to mail something for the first milestones of their kids — like their first birthday. But the kids are multiplying and the dollars are adding up. Is it acceptable to simply stop the gift train cold turkey?”

Heather Havrilesky: Well, I mean I have two kids. They’re nine and 6-and-a-half. And Jenny, I’m not sure what your friends are like or how many friends you have… but I wish I had more of you in my life [laughs]. The gift train for my kids, I think stopped after the baby shower.

Heather Havrilesky: Yeah, I don’t get gifts in the mail or handed to me for my children.

Rico Gagliano: You’re just saying she can just stop the gift train, because she’s already gone above and beyond.

Heather Havrilesky: She has gone way above and beyond. Come on!

You know when I think you should get people gifts? I think it’s important to give people gifts who never got married, never got kids, and they didn’t cash in all those gifts that they should have gotten from those events.

I think sending out an announcement and saying “It’s time for my gift”… OK, that’s not the best behavior, but I would totally send that person a gift. “I’m registering. Nothing is going on with me. You need to send me a gift.”

Brendan Francis Newnam: A single person’s registry! Let’s talk about that after this.

To lick, or to not lick the plate clean

“If you’re in a restaurant… and your plate of food is like, really delicious… is it OK to lick your plate clean at the end, if the restaurant is so busy no one would notice and you’re at a table with such a big party that they won’t notice either? I did this until I was 26. Now I’m 28 and have stopped because I knew it wasn’t proper dining etiquette. But I find it increasingly hard to resist, especially two nights ago when I had Italian.”

Heather Havrilesky: Mya! Hmmm. Licking? I don’t know what Mya’s telling herself that no one can see her licking a plate, you know? Like does she has some kind of invisible force field?

I wanna know, though, does she pick the plate up to get it closer to her face?

Rico Gagliano: That’s about the only way to do it.

Heather Havrilesky: Or does she bend over, and just shove her face into the plate?

Brendan Francis Newnam: Which is better? As the mother of a 9-year-old and a 6-year-old?

Heather Havrilesky: I’m gonna say faceplanting onto the plate, and maybe shielding the view with your hair, perhaps, is a little better.

I just want to know why it’s so hard to resist putting your tongue on a plate in a restaurant!

Rico Gagliano: She gave it up for two years and suddenly, it’s back: that damned addiction!

Brendan Francis Newnam: There’s bread! She’s talking about an Italian restaurant — you could use bread to clean the plate, and there’d be nothing left.

Brendan Francis Newnam: But is this another victim of the gluten-free thing?

Rico Gagliano: You could use a leaf of lettuce. I think what we’re getting down to is: Don’t do that.

Heather Havrilesky: This is actually a short answer. Just don’t, don’t do that.

Hiding the good beer at a party (hint: lettuce can be useful)

Rico Gagliano: Moving on. This is from Matt in D.C. Matt asks:

“When attending a small get together, it’s pretty standard to bring a six pack of beer and put it in the fridge or communal cooler. Does my beer contribution grant me access to all the beers in the collection? Or is it proper etiquette to just drink the beers that I brought?”

Heather Havrilesky: OK, first of all, let me just say, first drink one of your beers and then you can upgrade if you want to.

But it’d be better if it weren’t an upgrade, OK? If you’re bringing kind of middle and bad beer, and then you upgrade to the really expensive beer? That’s kind of not the coolest move in the world. But you can. You totally can do that. That’s fine.

Brendan Francis Newnam: Or you could hide your beer. That’s what I used to do.

Heather Havrilesky: I sometimes still do that [laughs]. If I notice there’s a lot of bad beer, you know, in the fridge.

Brendan Francis Newnam: Yeah, you just put it in the back of the fridge.

Heather Havrilesky: I once hid some under some lettuce [laughs].

Rico Gagliano: You guys, that’s the kind of advice…

Rico Gagliano: …That’s who we want on our show. Heather Havrilesky, thank you so much for telling our audience how to behave.

Heather Havrilesky: I am kind of a beacon to others, so I’m glad to share.