Hired by manager Brian Epstein just as the Fab Four were crawling out of Liverpool’s Cavern Club, the charming and cheerful Freda Kelly kept the Beatles’ office humming for 11 years — and then, out of loyalty and modesty, spent the next 40 keeping mum about it all.  In the new documentary Good Ol Freda, she finally tells her tales to director Ryan White.  This week they both stop by the studio to tell Rico.

Ryan White: I’ve actually known Freda for my whole life. My uncle is Billy Kinsley — he was in a band called The Merseybeats. So, I grew up going back and forth to Liverpool my whole life, and Freda was in my uncle’s group of friends.

I did not know she was the Beatles’ secretary — 0as we explore in the film, she really has lived a life of anonymity and is that private — and so it just never came up until a few years ago, when she approached me about doing “a little DVD,” as she calls it, for her family.  Just a family film.

Freda Kelly: You found out about me!

Rico Gagliano: I’m afraid so.  Why did you keep mum for so long?

Freda Kelly: Because I wanted to. I had worked for them for so long, and then I just wanted to get on with my married life, and have children, and look after my husband, and do the shopping and everything. I mean, I was approached over the years…

Freda Kelly: …Yeah, about six people approached me to do a book, but I didn’t want to do one.

Rico Gagliano: I have to admit, when I first heard about this movie, the first thing that just came to mind was, “Oh man, they’ll do a movie about anything having to do with the Beatles now.”But this is really an extraordinary story. At what point did you, Ryan, realize that this was just not gonna be a run-of-the-mill Beatles tale?

Ryan White: Well, I never wanted to tell a Beatles tale. I… when I was originally approached by Freda, I thought I was more doing her a favor, for her family: Recording her stories for family members.  And once we began having the conversations, my mind was just blown. And not just as a Beatles fan, cause I’m not a huge Beatles junkie —

Rico Gagliano: And you get to make this movie? That’s not fair.

Ryan White: — I know, I’m the only documentary filmmaker in the family, so I lucked out! But she’s an amazing storyteller, and that’s what I’m drawn to as a filmmaker.

Rico Gagliano: Well, let’s hear some of those stories. I don’t want to blow the entire movie for people — 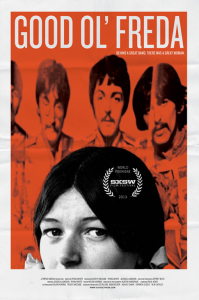 Freda Kelly: Oh no, that wouldn’t be fair if you did!

Rico Gagliano: — No, but you’ve had some pretty amazing adventures. You saw them when they were, you know, just a local band. At what point did you realize “this is going to be the biggest band in the world?”

Freda Kelly: That was the Town Hall, the civic reception. Liverpool decided to honor them. That was in 1964. It really should have been just the parents and the Beatles and, you know, the dignitaries of Liverpool.  But they put me down as one of Ringo’s family, so I managed to wriggle in.

Rico Gagliano: And tell us what happened at that.

Freda Kelly: Well what happened was, we had a meal, and then the four lads were to go out on the balcony, to wave to people.

And the town hall has got two massive glass doors that you open to go onto the balcony. And when those doors were opened, the noise just hit you.  And I thought, “What’s going on here?” and everywhere that I looked out was just full of people.

Freda Kelly: There was about 200,000 people there. It hit me then how big they were. It hadn’t really sunk in with me until then.

Rico Gagliano: There’s a point in the movie where you fire somebody, also working in the office, because they dared to send a piece of their own hair to one of the Beatles fans who had requested a lock of hair, instead of actual Beatles hair.

Freda Kelly: Yeah, but I knew.  I found out. You know, I didn’t want to fool anybody or send false things out. I know it doesn’t look bad, but it was bad to me!

Ryan White: Freda has two very distinct parts of her personality. I’ve experienced this as a filmmaker working with her. A very charming sweet side, but she can be really tough when she needs to be.  And I have to say that’s one of the reasons I think she lasted so long with the Beatles. She was one of their longest-serving employees.

Freda Kelly: I do come over very hard, don’t I?!

Freda Kelly: When I see it I think, “Oh, was I really that hard?”

Rico Gagliano: You’re lovably tough. You’re like a drill sergeant that you come to respect.

Freda Kelly: Or else!

Rico Gagliano: When I describe to people how much access you had, and how tight you were with the band, I always say “This woman was on the Magical Mystery Tour.” You were literally on the bus.

Freda Kelly: Yeah, well I did try and hide, you know. I didn’t like getting my photograph taken, but there is the odd shot of me on the bus.

Rico Gagliano: It’s pretty hard to hide away from cameras when you’re hanging out with the Beatles.

Freda Kelly: I know.  But you know, I should have been there for two weeks, and I gave a week up because I’d had enough of the madness after a week.

So how do you tell a Beatles fan that, you know? “Do you want to be with the Beatles for two weeks?” “No thanks, I’ll just have one week!”

Rico Gagliano: What did you leave for? What was more pressing to you?

Freda Kelly: Work. For that week I was still self-conscious about the mail coming in, and the work not getting done.

Rico Gagliano: In the film you say that when the Beatles broke up, you gave away most of your memorabilia. Of the items you kept, what is maybe the most precious to you?

Freda Kelly: What I would call “the lifelines.”

What they are is… you know, people were writing in saying you know, “How tall are they?” “What’s the color of their eyes?” “What car do they drive?” “What do they like to eat?” so instead of me having to type all that, I typed the questions down, and I asked them to fill in the answers.

Freda Kelly: Yeah. And I’ve got the four originals in the bank.

Rico Gagliano: In a vault?

Rico Gagliano: Sure, that’s gonna pay for a lot of grandkids’ educations.

Freda Kelly: My grandson’s future education.  If he goes to university, I don’t want him coming out with a debt.

Rico Gagliano: Do you still see the Beatles? They appear in the movie, they love you, obviously.

Freda Kelly: No, I’ve been to the odd concert, but I don’t keep in contact with them.

Rico Gagliano: Why not?

Freda Kelly: Would you keep in contact with your employer?! I can’t just knock on the door and say you know, “Hello, I used to work for you 40 years ago. Can I have a free ticket?” I wouldn’t do that.

Rico Gagliano: But it’s more than that at this point — there are so few people from that era that are probably still around. You’re like part of the original inner circle.

Freda Kelly: There’s not many of us left. I think I’m one of the few that’s left, only because I was one of the youngest.

Rico Gagliano: That’s what I’m saying. That’s the benefit of being a 17-year-old.