Brendan Francis Newnam: Each week you send in your questions about how to behave, and popping down our chimney to answer them this time around is Fran Lebowitz!

Her sardonic wit first cropped up in columns for Andy Warhol’s “Interview” magazine. Then she published the acclaimed essay collections “Social Studies” and “Metropolitan Life” — in which she wrote about the joys of sleeping and smoking, the terrors of algebra, and the horror of annoying children.

Those books are compiled in a collection called “The Fran Lebowitz Reader,” which is out now on audiobook. Martin Scorsese himself made her the subject of his documentary “Public Speaking.” And Fran, welcome back!

Brendan Francis Newnam: When we thought “holidays,” we thought immediately that we needed you here.

Fran Lebowitz: Who would not?

Rico Gagliano: We read, actually, that for Christmas many years ago, you were given a drum set? You had this kind of dream to be a drummer. Is that dream still there?

Fran Lebowitz: No. But that’s right — Keith Richards gave me this drum kit.

Brendan Francis Newnam: Are you serious? 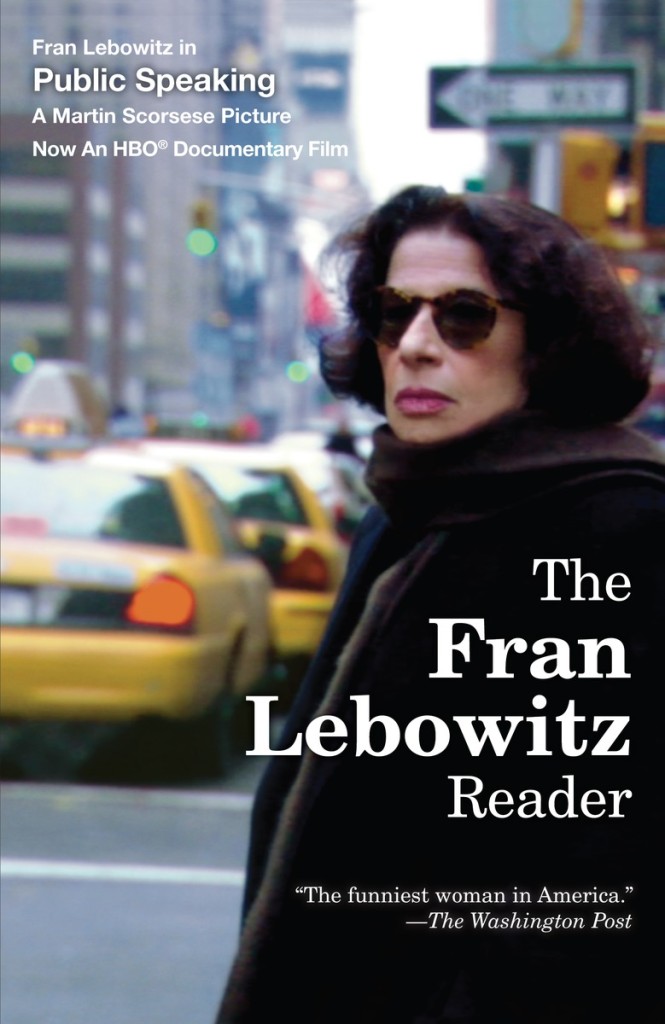 Brendan Francis Newnam: You do not have the talent for drums?

Fran Lebowitz: You know? But it’s harder than it looks, and it’s very physical. And I’m extremely lazy. It’s an exhausting experience.

Rico Gagliano: Yeah, you can’t be a lazy drummer.

Fran Lebowitz: No, you can’t.

Brendan Francis Newnam: Do you know why Keith thought it was a good idea for you to have a drum kit?

Fran Lebowitz: Well, because I’m certain I’d mentioned it, that I would like to be a drummer.

Fran Lebowitz: I probably said, you know, “That Charlie Watts, why don’t you get rid of him? I’m available!”

Brendan Francis Newnam: You’re like, “Look, I’ll smoke with you on the bus. You won’t have that fight anymore.”

Fran Lebowitz: Well past the bus days, I would say.

Brendan Francis Newnam: Well, we were talking about, you know, the drums as a Christmas gift… but weren’t you raised Jewish?

Fran Lebowitz: Well, when I was a child, it was before… I don’t know what the word is… It was before you had to appease every religion other than Christianity.

You know, it was basically a Christian country. That was it. I lived in a town where there were relatively few Jews. And the entire town celebrated Christmas. Which I adored — I loved Christmas, by the way.

Fran Lebowitz: Because you know, in the ’50s, when I was a child, the world was kind of black and white, but Christmas was colorful. And it was my first — I believe — my first encounter with what would basically be my frame of mind, which is: there’s Christmas, but we don’t have it.

Rico Gagliano: Oh, so it was kind of a downer.

Rico Gagliano: It was like, “This wonderful Technicolor dream… I can’t have that.”

And Hanukkah was a kind of… you know, I mean, it was “little,” compared to Christmas.

Brendan Francis Newnam: Did you get dreidels, stuff like that?

Fran Lebowitz: Yes, but, you know, that wasn’t Christmas.

Brendan Francis Newnam: Oh; you were like an elf.

Fran Lebowitz: I was extremely adorable, as you can imagine.

Rico Gagliano: Aww, all right. Well, it’s exactly that elven, bright-eyed attitude that we’re hoping you’ll bring to our listeners’ etiquette questions. You ready for these?

Fran Lebowitz: I am more than ready.

Rico Gagliano: All right. You’ve been ready your whole life.

Rico Gagliano: Here’s something from Tori in Topeka, Kansas. Tori writes: “What, if anything, can be said to a person wearing a vastly overdecorated holiday sweater?”

You, a very well-dressed woman.

Fran Lebowitz: You know, people ask these kinds of questions. I don’t mean just of me, but in general. [But] you don’t have to comment on every single thing. You can simply say nothing!

But I’ve noticed, in the Midwest, they’re kind of excessively friendly. So Tori probably feels you’re supposed to compliment everyone, and so probably the question is: “Do I have to lie?”

Fran Lebowitz: You don’t have to lie. Or you may, because it doesn’t matter — it’s not even a white lie to say you like someone’s sweater.

Fran Lebowitz: …Any time you walk out your door, you think, “What?! What were you thinking?! You chose this? There must’ve been one other thing to choose that was better than this!”

Rico Gagliano: So, maybe Tori can give, as a holiday gift to the person with the overdecorated holiday sweater, a lovely mirror.

Rico Gagliano: OK, there’s a polite thing to do.

“The Smartest Man in the World” phones it in

Brendan Francis Newnam: All right, now we have an audio question. This was left on our hotline by one of your biggest fans, Fran. Let’s hear it.

Greg Proops: Hi, this is Greg Proops calling from West Hollywood, and I have a question for Ms. Lebowitz. At what point during a holiday function is it OK to tell a relative that you hate them? Thank you.

Rico Gagliano: That would be Greg Proops, star of the improv show “Whose Line Is It Anyway?” and his own podcast, “The Smartest Man in the World.” He actually sang your praises on this show a few months ago, Fran, so…

Fran Lebowitz: Oh, thank you! And thank you for repeating his name, because I thought you said “Greg Proust.” Which is a wonderful name for someone in radio.

Fran Lebowitz: What I really believe is: don’t go to these things.

You know, there’s an incredible celebration of family lately. The more broken families become, the more scattered they become, the more people feel this nostalgia for family they may never have had. If they’re not supporting you, you don’t have to go.

Telling them you hate them is probably not the best thing. It’s like suing someone. You’ll make it never end.

Brendan Francis Newnam: That’s the gift you’re giving them: not telling them you hate them.

But we’ve noticed on our show — where often we interview authors, etc. — there’s been a big boom in memoirs in the past few years.

Fran Lebowitz: Oh, no — in the past, like, twenty years.

Brendan Francis Newnam: So, maybe going to your holiday thing… I think people want these experiences so they have something to write about. They go back for more fodder, right? They go back to play out these psycho-dramas with their parents.

Fran Lebowitz: Truthfully, the average observant person has enough material by the age of eight for the rest of their life. You can stay home after that. And especially at a family gathering, nothing new is going to happen.

Rico Gagliano: Yeah, you’ve played out that Freudian nightmare many a time.

Fran Lebowitz: Over and over again. You could go to someone else’s family gathering and it would be almost the same, except you would not have the hate.

Brendan Francis Newnam: All right, there you go. So, save on the hate; go to someone else’s family gathering, Greg Proops!

Rico Gagliano: Here’s something from Patrick in Medina, Washington. Patrick asks: “Ms. Lebowitz, when hosting a holiday party, how can I politely move my guests’ table conversations away from rambling, self-indulgent, narcissistic tales, onto topics more appealing to the larger group?”

Fran Lebowitz: This is… well, first of all, as you may or may not imagine, I don’t host parties. I go to them [laughs]. So you know, I’m a guest, I’m not a host.

Brendan Francis Newnam: But as we cited at the top of this segment, you worked with Andy Warhol. You’ve worked with many, many famous people. There are some narcissists in that group, no matter how riveting…

Fran Lebowitz: Right, but I never had them to my house.

Fran Lebowitz, thank you so much for joining us again, and for telling our audience how to behave this holiday season.