Brendan Francis Newnam: Elizabeth Gilbert began her career writing magazine pieces for the likes of GQ and The New York Times, and then went on to write several well-received books, including “The Last American Man,” which was nominated for a National Book Award, and then she wrote a memoir about her globe-trotting journey of self-discovery called “Eat, Pray, Love.”

It was a smash hit that sold ten million copies and counting. Her latest non-fiction book is called “Big Magic.” It contains her advice for what she calls, “creative living beyond fear,” and Elizabeth, welcome back to the show.

Elizabeth Gilbert: Thank you. It’s wonderful to be… yay!

Brendan Francis Newnam: There you go! I was going to say, “Rico, can we get a yay?!?”

Elizabeth Gilbert: This is the “Yay!” moment. You know, that’s not even him. He just has a button that he pushes.

Brendan Francis Newnam: He does. We’ve basically– we’ve taken on all the attributes of FM radio in the ’80s.

Rico Gagliano: We’re bringing it all back, Elizabeth, just for you.

Brendan Francis Newnam: But, I want to talk to you about “creative living.”

Brendan Francis Newnam: Which is the term you use in this book. 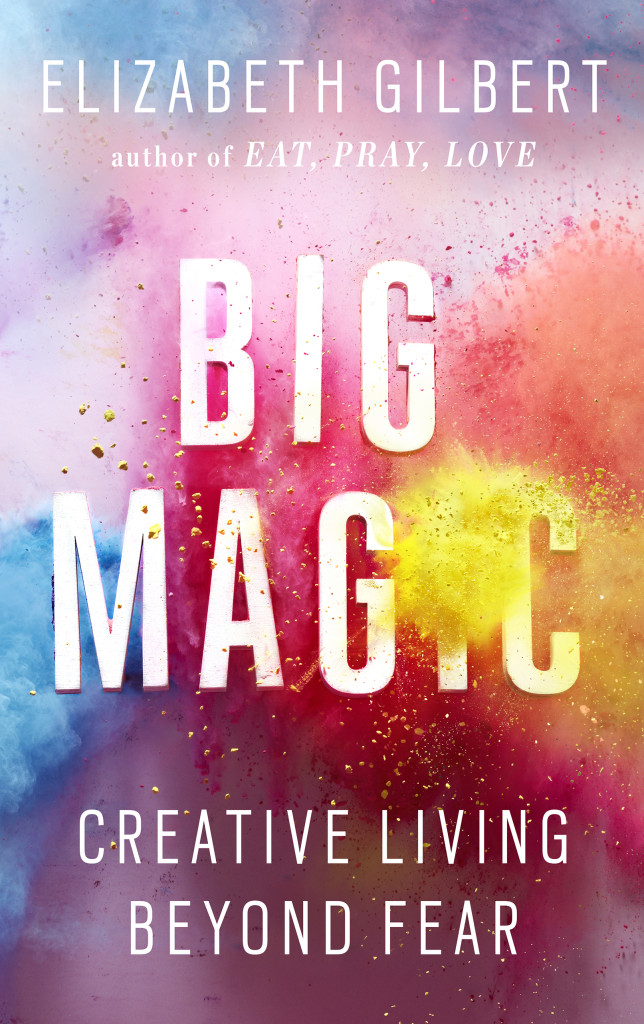 Brendan Francis Newnam: Can you explain how you conceive of this term?

Elizabeth Gilbert: I can. My definition of “creative living” is any life where you consistently make decisions based on curiosity rather than fear because I think that creativity and fear are conjoined twins, and any time you try to do something creative, which will push you into a realm with an unknown outcome no matter how small it is, you can be certain that your fear is going to be on alert.

Elizabeth Gilbert: Because it doesn’t like it when you do things with unknown outcomes, and it’s going to try and stop you. And so, you have to kind of figure out how to cope with that because your choices are, you know, listen to the fear and have a very small and probably frustrated life, or figure out a way around it to have a more interesting, curiosity-driven, inquisitive life, which is, I think, what we all really want for ourselves.

Rico Gagliano: You have gone from being a journalist and fiction writer to someone that some fans almost want to model their lives after. There’s, you know, a boom of people going to Bali in the wake of “Eat, Pray, Love,” for instance.

Rico Gagliano: And now, you’re somebody that they would want to buy an advice book from. When did you realize that was happening, and how did you become comfortable with that idea?

Elizabeth Gilbert: Well, it happened after “Eat, Pray, Love,” which was accidentally a self-help book. This book is, by the way, totally 100 percent a self-help book. Which is… I think it’s, like, the most punk rock you can do, is to write the least respected form of literature, and totally destroy any chance that you have to be taken seriously.

But, yeah, I mean, “Eat, Pray, Love,” for me, you know, was a travel memoir, and it was a lot of other things, but people certainly ended up using it in their own lives as a self-help book.

And I felt really uncomfortable about that for a long time, and tried to put it off, and tried to make snarky jokes about how it wasn’t true and… I…like [was] just so uncomfortable that I would have to shift it off, in a way, until I realized what a total jerk that was making me act like.

Rico Gagliano: But that must be a huge burden, as well, though, because I’m sure there are people who say, you know, “I want to quit my day job and be just like you!” And it’s really difficult to be just like anybody.

Elizabeth Gilbert: It’s virtually impossible to be just like anybody. But for me, I guess, at this moment, I feel like if I have an audience, and people want me to give them advice, the only thing I feel super-qualified to give advice about is creativity because it’s the one thing I can truly say I’ve spent my entire life engaged with in a way that hasn’t been tormented.

And so I feel like, OK if you want to hear me talk about something, why don’t we talk about this thing? And if it’s helpful to you, here’s what I think, including please, please, please don’t quit your day job without a backup plan. Please!

I didn’t quit my day jobs for my first three books, and all of them were published by major publishing houses, and I still had day jobs on the side because I never wanted to burden my creativity with the responsibility of paying for my life, because I loved my creativity too much to ask it to do that.

Brendan Francis Newnam: Well, that’s the sort of advice we want you to continue to give when we turn to our listeners’ etiquette questions.

Rico Gagliano: You ready for these?

“Dear Liz, a friend of mine asked me to speak at an event she was running, and I said yes. I never heard from her about it again, and just saw on Instagram that the event was yesterday. I now feel awkward about seeing her again, but curious as to why she gave me the cold shoulder. Should I say something?”

Elizabeth Gilbert: You know, the TED Conference did that same thing to me.

Elizabeth Gilbert: No, I’m just kidding [laughs]. Well, as a passive-aggressive person who doesn’t know how to handle conflict, I would say what you do, go to her house while she’s sleeping, and then just — while she’s asleep — stand at the foot of her bed and recite the speech that you were planning on giving.

Rico Gagliano: There’s nothing passive at all about that.

Elizabeth Gilbert: “Oh, I would have loved to have been at an event like that!”

Brendan Francis Newnam: Yeah, “I would have loved to come to an event like this!”

Elizabeth Gilbert: I guess there’s– you know, the really direct way would be to just say, “Wow, I’m a little confused because I thought you were…” But I would never do that because I’d be too afraid to do that. I would say just move to another country. That’s what I do whenever I’m in an awkward social situation [laughs].

Brendan Francis Newnam: Oh, my goodness! OK. Either break into her house or move to another country, two very practical pieces of advice.

Elizabeth Gilbert: Do you see why people see me as a guru?

Elizabeth Gilbert: Can you also maybe assume that there was a misstep, that maybe there was a phone call that you didn’t get or an email, that she thinks that you blew her off? That maybe it’s like, a…

Brendan Francis Newnam: I’m not a benefit of the doubt guy.

Rico Gagliano: But I think you’ve got a way forward there if you act as though the person maybe missed something, and maybe you can send an email saying, “Hey, did you get this? Next time I’d love to be considered.”

Brendan Francis Newnam: Well, there we go, Caroline. You have several approaches right there…

Elizabeth Gilbert: So many threads of advice.

Brendan Francis Newnam: …Attack, run away, or assume the best.

Rico Gagliano: Here’s something from Robert in Chicago. Robert asks:

“If you see a fellow American in a foreign land acting disrespectfully to local customs, should you say something to him or her? I feel like I wouldn’t police this behavior at home, but somehow abroad it bugs. Like, ‘You’re making us all look bad!'”

Robert, I feel you.

Elizabeth Gilbert: Look, I’m married to a guy who thinks he is the policeman of the entire world. And it is terribly anxiety-producing for me to go in public spaces with him, where he feels the need to correct other human beings on their behavior. My feeling, being a W.A.S.P. [laughs], is that, you know…

Elizabeth Gilbert: …No confrontation is good confrontation, and if you’re abroad and their behavior is bothering you, then the great thing is that you can get on a train and go to another city.

Brendan Francis Newnam: You’re abroad, probably, to escape a little bit of this…

Brendan Francis Newnam: …And so, I don’t think it’s your time to be the world policeman, at that point.

Rico Gagliano: But it is true, then it ends up coming back to bite you, though, if people start developing a terrible attitude towards Americans…

Elizabeth Gilbert: Did you just say, “If people start”?

Brendan Francis Newnam: Yeah, I mean, come on, that…

Rico Gagliano: That train has left the station?

Brendan Francis Newnam: But I think getting into a confrontation with an American — that’s only going to make it worse.

Elizabeth Gilbert: Unless you can totally, like, Bruce Willis it, just like, be the enforcer, and go double-down American on them, and totally be the cop of the world.

Brendan Francis Newnam: There you go, Robert in Chicago. You have several options, including “Bruce-Willis-ing” it. That’s a verb.

This next question comes from Beth in Seattle, Washington, and Beth writes:

“If you write something based on a person, and then someone asks you if your fictional character is kind of, sort of based on that person, can you demure? I want to maintain the mystery.”

Brendan Francis Newnam: I think Beth just told us she does write things about people.

Elizabeth Gilbert: I think she does write things about people.

My move with this has always been to say, “Well, what do you think? Was there anybody in the book who you felt like kind of reminded you of you?” Because my experience is, oftentimes, it is true that there is somebody in the book based on that person, but it’s not who they think! And then, let them choose who they think it is, and if it’s a positive character, say, “Of course I based it on you,” and if it’s a negative character, then you say, “Why would you think that was you?”

Brendan Francis Newnam: Because I’m a borderline alcoholic who gets mad at people.

Elizabeth Gilbert: And you spelled my name backwards and made the character out of it.

Brendan Francis Newnam: Yeah, exactly. Who is this “Nadnerb”?

Rico Gagliano: Wow. Beth, there’s your answer, and, Elizabeth Gilbert, we are out of time. Thank you so much for telling our audience how to behave.

Elizabeth Gilbert: Oh, my very great pleasure [laughs]. Thanks for having me back, you guys.