Brendan Francis Newnam: Your new book examines the eating habits of tyrants around the world and through the ages, and it even includes recipes of some of their favorite dishes. It’s called “Dictators’ Dinners: A Bad Taste Guide to Entertaining Tyrants.” Let me ask you about the the “bad taste” part. Is it really appropriate to talk about dictators’ dining habits?

Victoria Clark: It is in bad taste, yes, because it includes recipes which, if you serve them up to your friends at a supper party or something, some people might want to vomit before they even start just at the thought of eating what dictators ate. 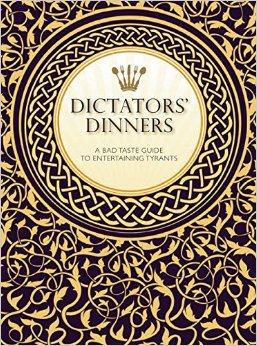 Brendan Francis Newnam: You know, could it be said that you’re somehow, maybe, lessening the gravity of the crimes of these people, by humanizing them?

Victoria Clark: On the one hand, we don’t want to humanize them, but we do want to cut them down to a human size. Because, after all, as I said in the forward, “The line between man and monster is a thin one.” It just needs to be remembered, that they’re not superhumans. They’ve got terrible digestive systems or obsessions with the size of their rice grains or idiocies like that.

Brendan Francis Newnam: Can you pick one of the recipes you found most interesting, and tell me what it tells us about that person?

Melissa Scott: Well, I’ve cooked semeç masgûf semeç, which was Saddam Hussein’s favorite dish, which is basically carp which is caught on the Tigris. There are fish tanks that line the River Tigris, and you can pick your carp, and it will be cooked for you. This is a very traditional, humble, simple dish, and I think that was Saddam Hussein harking back to the Iraqi people and his roots.

Victoria Clark: Well, Tito, for example, Yugoslavia’s dictator. Interesting. He had a very, very humble childhood and seems to have consisted of eating an awful lot of slabs of pig fat. The mountains in Croatia was where he came from. Then, of course, once he came to power, he loved nothing better than entertaining in huge style with fireworks and only the best of every food aboard his presidential yacht. Very nice. Sophia Loren and all sorts of stars of stage and screen would join him there. Sophia Loren even helped him cook. He became a real bon vivant from his humble background, but never lost his taste for the odd snack of pig fat.

Brendan Francis Newnam: Another interesting snack you read about is Malawi’s Hastings Banda, who kept crispy fried worms in his pants pockets?

Melissa Scott: Yes, he’d hand these crispy fried worms, mapane worms, out to the children as he walked around, as a treat for the children. These are actually a delicacy, apparently, in Africa. I have a South African friend who raves about them.

Brendan Francis Newnam: And then Mussolini, one of his favorite dishes was a bowl of raw, chopped garlic.

Victoria Clark: That’s right. Very, very strange. You’d think, being an Italian, that he’d want some very, very nice pasta or some delicious cooked lamb or something like that. No. That was all he wanted, a bowl of raw garlic drizzled with a bit of oil and a sprinkle of salt. And then, of course, his poor wife Rachele just refused to sleep in the same room with him after that, because he stank to high heaven, I suppose.

Brendan Francis Newnam: And, it could maybe cause digestive problems, another theme that emerges in this book. Hitler had flatulence, famously, and then Qaddafi, as well.

Victoria Clark: Hitler was very, very afflicted. 28 different medicines, he was given for his flatulence. Of course, they didn’t really work, because on the one hand, he was constipated. On the other hand, he was flatulent. But, he thought that his turning vegetarian would help the situation. But, I think anybody in their right mind knows it could easily have the opposite effect.

Brendan Francis Newnam: That’s right. Another pattern that emerges in this book is the idea of purity. Was it Kim Jong Il that had every grain of rice inspected?

Victoria Clark: That’s right. We found, with a lot of them, as they aged, they become more and more obsessed with how they are going to preserve themselves, and it becomes even more shocking, really, how their refusing to let their people eat anything, while themselves, as you said, growing rice of a certain size, just for themselves? As one psychologist has put it, this is food for a god, not for a human being. They are so obsessed with that purity.

But, also, a kind of paranoia that you find with someone like Ceaușescu, who ends up drinking fruit juices through a straw and never accepting anything in any foreign banquet, just in case it’s poisoned or could make him ill.

Brendan Francis Newnam: The purity instinct seems to me like they’re trying to control the one thing they can’t control, which is the ravages of time, and being human.

Brendan Francis Newnam: What got you started on this book? It’s kind of a macabre topic.

Melissa Scott: Well, I’ve been thinking about it for quite a while. I was given a book about meals that Tito had been eating, and we had a dinner party, Victoria and I, and we started talking about it and evolved from that, over dinner. Then, we decided to have business meetings in the pub from then on.

Brendan Francis Newnam: That sounds like a great way to launch a project.

Melissa Scott: A lot of fun.

Brendan Francis Newnam: I bet you the dinner parties diminished in number when it came to the fried worms and the ground turkey bone soup days, right?

Melissa Scott: Yeah, we’re not so popular now. I can’t think why.

Brendan Francis Newnam: Well, you can invite me over the next time. You know, actually, Stalin’s chicken seemed pretty interesting, so if I’m in town…

Victoria Clark: Well, don’t be too sure about that. It’s pretty grim.

Brendan Francis Newnam: Oh, is it?

Brendan Francis Newnam: I know it’s labor, but it had cinnamon and marigold seeds and chicken, and it seemed potentially delicious.

Victoria Clark: Yeah, but also, a ton of walnuts in it, which can be quite bitter unless you take off the skins, and I really had made a disgusting concoction the other day.

Brendan Francis Newnam: Alright. Well, I may then reserve my right to bring my own food taster, in keeping with the tradition of the dictators.

Melissa Scott: Or, just your own food.

Brendan Francis Newnam: That’s right. I’ll them eat that for me, or I’ll just bring a stealth burrito from America.

Brendan Francis Newnam: Well, thank you so much for coming by.