Last weekend, Brendan visited the Marfa Myths festival, held in the tiny Southwestern Texan town of Marfa. It has increasingly become the place to be and it’s hosted by indie-music label Mexican Summer and local art gallery Ballroom Marfa.

At the center of the fest is a fine art show called “After Effects.” And it includes pieces by world-renowned artist Dan Colen. His work is in the Whitney museum’s permanent collection, among others.

Below the artist, who has featured Disney animation in his work in the past, discuss a triptych of paintings he contributed to the show, which were inspired a scene from the 1940 Disney musical “Fantasia.”

On what is at the heart of these paintings 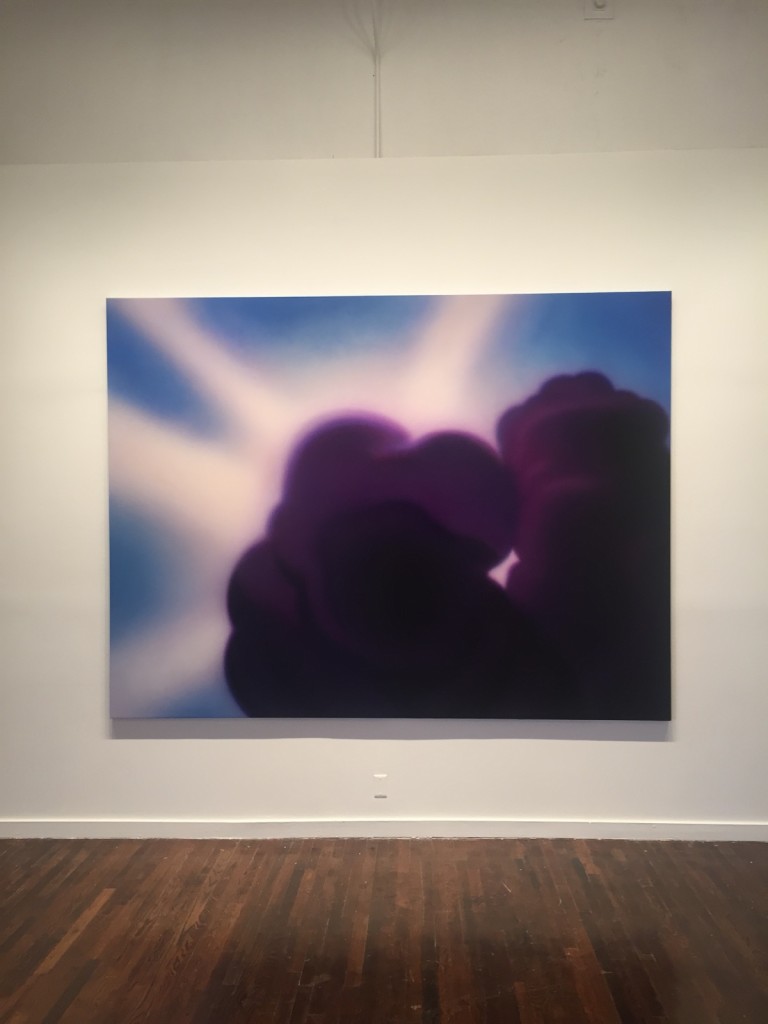 What I’m trying to kind of accomplish is maybe transcend the image a little bit through the material and the way I apply it. They’re sprayed oil. It’s traditional artist oil paint, but it’s sprayed in many, many, many layers. And there’s really nothing that speaks to any kind of, like, illusionistic deep space.

So, the clouds and the sky, on quick glance, you see them reading like the clouds in front and the sky in back. But when you actually spend a little time with it, there’s really no space implied. And so they’re kind of on one plane. So, it has an abstract quality, and the material is like, kind of first and foremost.

On the painters that have influenced him

Some of my biggest influences are landscape painters like Claude Lorrain, and Caspar David Friedrich, and, you know, [Joseph Mallord William] Turner, and [John] Constable. Like, these painters of skies are really, really important to me.

Those painters unapologetically sought to create or, at least, kind of illustrate — but I think create — a spiritual experience, using nature as their kind of subject, but understanding that, like, through the act of painting, there could be, like, a deeper connection to whatever nature was able to kind of provoke in a person. They thought painting could, too.

On why he’s drawn to the images from Disney animation

I mean, this is always a hard question for me to answer because Disney really, it is such a… like, it comes with so much baggage. It kind of like, became a big part of my work in a pretty fluid way. So I was never like, “I have this mission with Disney because it means this, this, and that.” You know, it really kind of developed.

There was a project 10 years, 15 years ago that I needed a fairy for, and I was going to use Tinkerbell. And then I was looking through the book, and I decided to use the fairy from Pinocchio. And I had the book, and then I finished that painting, and there was a different image from Pinocchio that spoke to me.

Then for many years, I didn’t use it. But there are certain images that stayed in my mind, which is the quality of Disney, and which is what I’m interested in. You know, we all carry it with us. It’s kind of like part of our basic kind of cultural vocabulary. And the idea that, like, the thing that’s made for every child can also be the most sublime thing, the most potent thing. And it has layers and layers and layers of meaning, like everything does, really, depending on how we come to it.

On what the average person can gain from looking at paintings

You know, like, there are no words. But I can share, like, why I do what I do is I believe strongly — and, you know, it’s no different from music or literature — these… the arts change the world. They just do. Like, I don’t know how, I don’t know why, and I don’t know, like, at what kind of pace they have their impact. You know, they seep, and, like, to spend an afternoon doing something that, like, has no purpose, really is important, you know?

Visual arts or a book or listening to music all give you that opportunity to… you know, there’s enjoyment in all of it. But there is also a curiosity to all of it that, like, allows us to kind of consider something without that point at the end of it. And I think that’s really important.

IT’S A PARTY IN YOUR INBOX…

…when you subscribe to our weekly newsletter. Youâ€™ll find all sorts of good stuff there like bonus audio, musings on culture from our staff, photos of our guests and co-hosts being ridiculous, and new cocktail recipes. Sign up below!